Solana is the largest concentrated solar power parabolic trough plant in the world.

Abengoa Yield (Nasdaq:ABY) the sustainable total return company that owns a diversified portfolio of contracted assets in the energy and environment sectors, announces that Solana, its Arizona-based concentrated solar power plant, received the Governor’s Award for Energy & Technology Innovation and the President’s Award, both part of Arizona Forward’s 34th Annual Environmental Excellence Awards. Winners were announced on September 20, 2014, at the Arizona Forward Award Gala attended by more than 600 community leaders.

The Arizona Forward Environmental Excellence Awards competition is Arizona’s oldest and most prestigious awards competition focusing exclusively on sustainability. It spotlights projects that demonstrate a high level of environmental commitment that contribute to the state’s sustainability. Solana was recognized as an innovative, clean-energy solution in the statewide category of Governor’s Award for Energy & Technology Innovation.

A jury selected the Solana Generating Station for top honors because it not only boosts Arizona’s solar industry, but offers significant environmental benefits and represents a new and unique technology in the U.S. The project also earned a first-place Crescordia in the Governor’s Award for Energy & Technology Innovation – Central Arizona category. 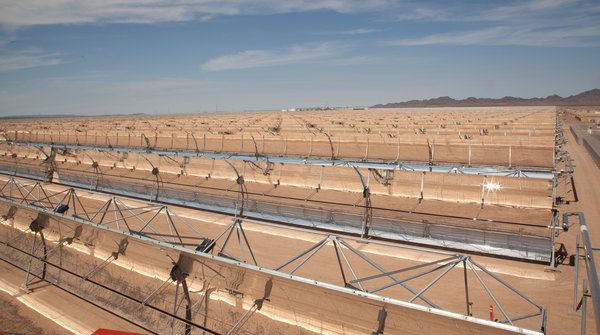 Solana’s parabolic trough collectors track the sun and concentrate sunlight onto receiver tubes located at a focal point of each collector. A heat transfer fluid (HTF) is heated as it circulates inside the tubes and is then circulated back to a central power plant. The HTF then passes through a series of heat exchangers to produce superheated steam that is used to generate clean electricity in a conventional steam turbine generator.

Solana’s thermal energy storage system is able to generate power at maximum capacity for six hours without solar radiation, producing electricity when needed during cloudy periods, after sunset, or before the sun rises. This system provides APS with the flexibility to shape the electric production to meet its system load needs, providing up to six hours of full-load capacity for baseload and peaking applications.