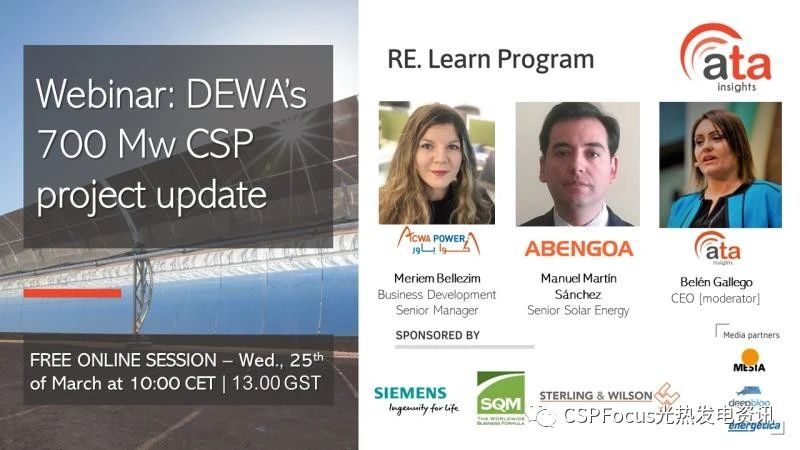 The following are some of the key content summarized by CSP Focus: 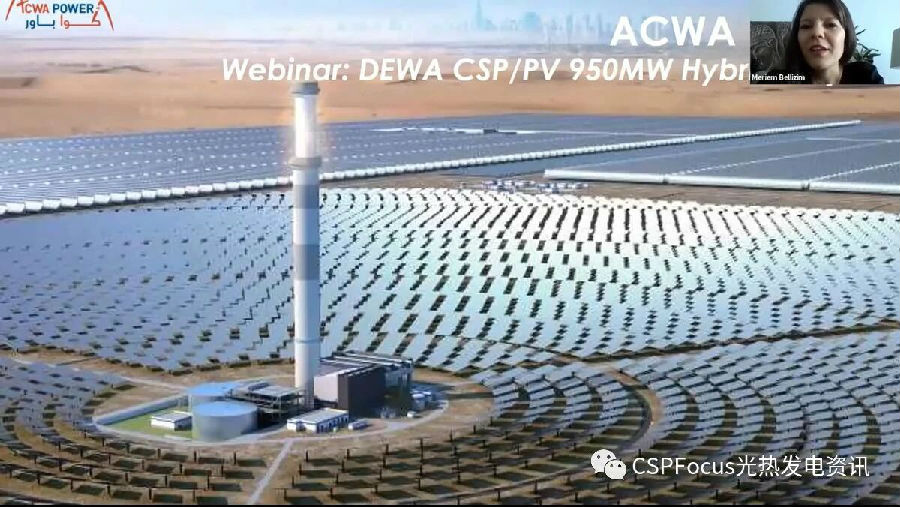 In terms of the tariffs of solar power projects ACWA Power has made in recent years, for example, in the same Dubai’s Mohammed Bin Rashid Al-Maktoum Solar Park, we have moved from USD 5.8 cents/kWh to 1.69 cents/kWh, which is more than 70% off for the Phase 2 and Phase 5 PV projects. While in the CSP, we have reached more than 60% of lower tariffs between the first project that we had in CSP—South Africa’s 50MW Bokpoort Parabolic Trough CSP project and the Phase 4 in Dubai.

We have been talking about the energy transition toward a global energy with zero carbon emissions, and this huge 950MW CSP-PV solar project is really supporting this transition using renewable energy.

The project is implemented and owned by a company named Noor Energy One to meet the requirements of the law in UAE. Together with 700MW CSP, another 250MW PV project forms a total capacity of 950MW for the Noor Energy 1 project. The project takes use of three technologies to produce 950MW of clean energy — 600MW from three parabolic trough CSP plants, 100MW from a solar tower, and 250MW will be generated from photovoltaic panels. 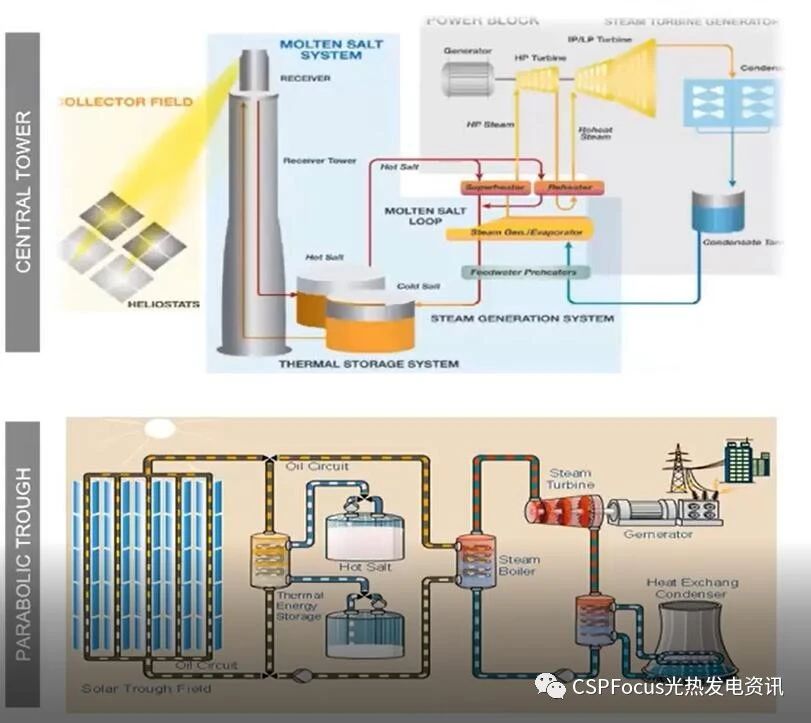 As the picture below shows, DEWA is to provide $750 million, half of the project equity. Of the remaining half, ACWA Power will provide 51% and China’s Silk Road Fund 49%. In June 2019, the Silk Road Fund purchased a 49% stake in ACWA Power’s renewable energy business.Located in Dubai, UAE, Noor Energy 1 is a typical “international” project participated by companies from over 10 countries. The owner Dubai Electricity Water Authority (DEWA) awarded the project in 2017 at a record-low tariff of $73/MWh to Saudi Arabia’s ACWA Power consortium, and China’s Shanghai Electric signed EPC Contract in 2018. 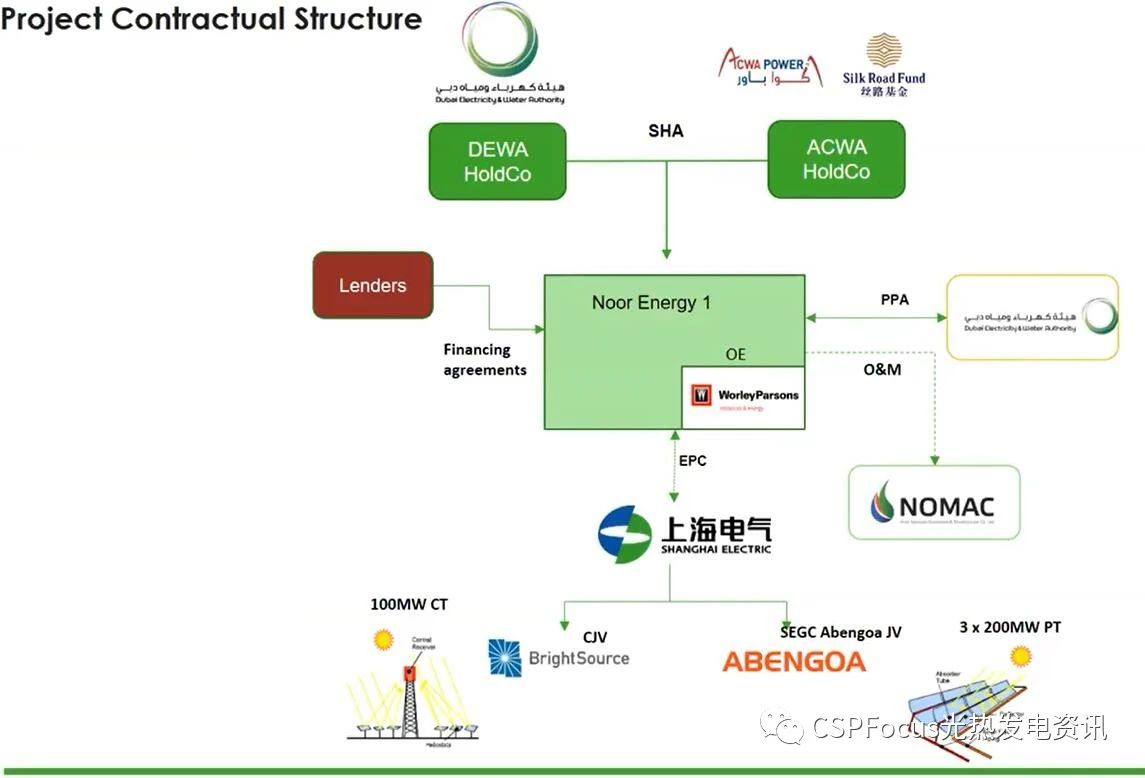 The project will include technologies from a wide range of suppliers, of which Spain’s Abengoa is responsible for CSP Parabolic Trough tech and USA’s BrightSource for CSP Tower. 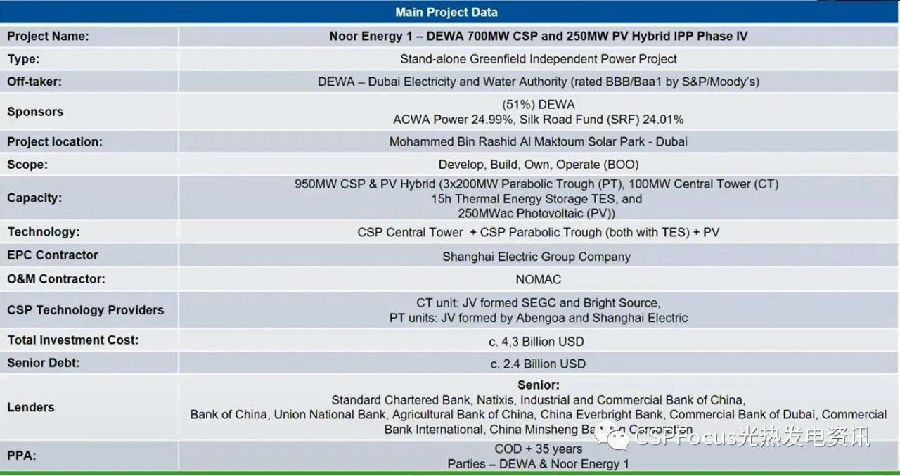 The project reached financial closure in March 2019, and $2.4 billion of the total $4.3 billion investment are of senior debt. You can imagine that having senior debt of $2.4 billion is very challenging. At the time of development during 2018, we have worked very closely with many lenders and banks. As shown in the chart above, the banks include Standard Chartered Bank, ICBC, Bank of China, Union National Bank etc.In addition to the senior debt, we have used also an EBL, which is equity bridge long for our projects and has also use this money for the PPA, which is the longest PPA that we have seen in CSP technology of 35 years.

The Mohammed bin Rashid Al Maktoum Solar Park is the largest single-site solar park in the world, based on the IPP model. It will generate 5,000MW by 2030 with investments of up to AED 50 billion. The 13MW photovoltaic first phase became operational in 2013. The 200MW photovoltaic second phase of the solar park was launched in March 2017. The 200MW first stage of the 800MW photovoltaic third phase became operational in May 2018. The third phase project has been awarded to ACWA Power, and it consists of three units, each unit has 200MW or 300MW capacity, totaling 800MW PV. 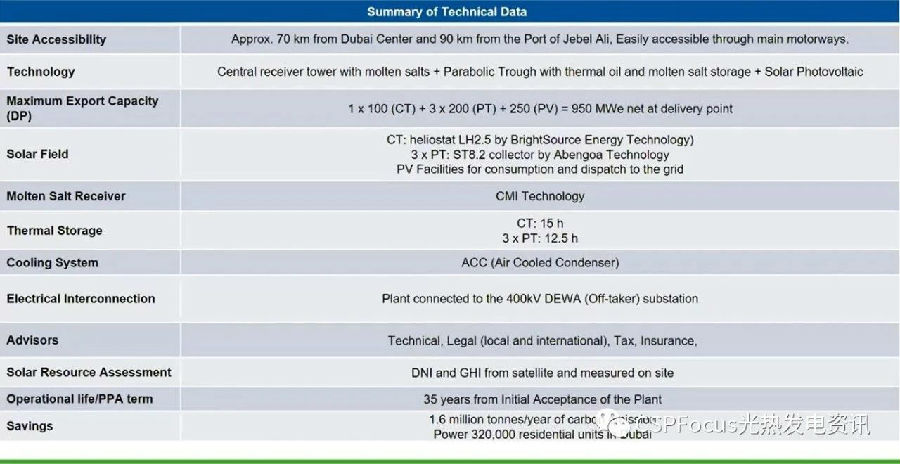 Summary of Technical Data of Noor Energy 1
The site is very well accessible, it is around 70 kilometers from Dubai and 90 kilometers from the port of Jebel Ali, and very well connected to two roads from the solar Park.We use heliostat LH2.5 by BrightSource for the central tower project, and ST8.2 collector by Abengoa for all the three parabolic trough units. Same technology used in the three units makes engineering and execution a little bit easier.
Speaking of the key components, Belgium’s CMI will supply the molten salt receiver for the tower plant and Rioglass will supply the mirrors for PT projects, Germany’s Siemens will supply four steam turbine generators and auxiliary equipment for the parabolic trough and tower plants, Denmark’s Aalborg will supply steam generation technology for the parabolic trough section…
To get the full participants list and the project detailed introduction you may download:Free report: Dubai 950MW NOOR Energy 1 CSP-PV Project (Feb. 2020)

For the thermal storage, so, we are considering 15 hours for the central tower unit and then 12.5 hours for each of the parabolic trough units.

Given the huge area of the project with around 44 square kilometers, it’s very far to connect one unit from one side to the other. We have several switching stations which are under construction in the project and will connect from them to the 400kV DEWA substation.

Considering the complexity of the project technically and financially and even contractually, there was a huge amount of advisors checking and reviewing the project making sure that this project is sustainable and physical.

One of the important points to highlight in this project is that the project has more than 1.6 million tons per year of saving in carbon emissions, and power more than 320,000 residential units in Dubai.

The work is progressing according to the set timetable for this project that will contribute to Dubai’s transformation into a global clean and renewable energy hub, and accelerate its shift towards solar power.

The expected construction duration lasts 48 months, meaning the overall 700MW CSP project will be completed by the end of 2022 in four years. Separately, the first parabolic trough CSP plant is planned to be operational on August 22, 2021, in 32 months, tower CSP plant finished on November 22, 2021 in 35 months, and the second and third parabolic trough plants to be completed by the end of the year of 2022. 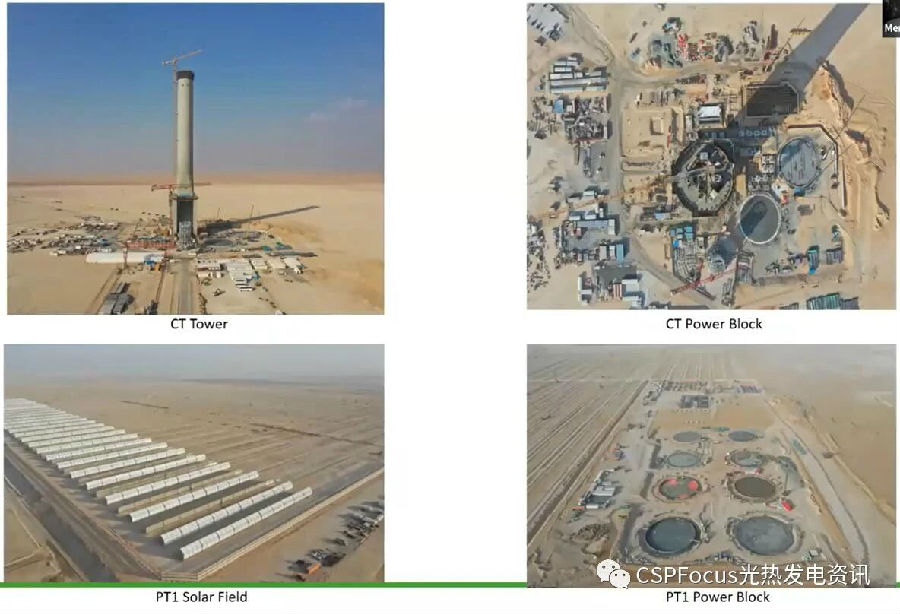 The first key milestone that has been achieved in 2019 is the central tower, the civil construction part of the concrete tower has been achieved. Currently we are erecting the MSR and then the lifting is going to start by May 2020.

We have reached 3,200 employees on site in total as of the beginning of 2020, and reached more than 4.2 million safe man hours, which is a key point in terms of safety in the project.

As you may know, the EPC Shanghai Electric is Chinese, the project company is from Dubai and the technology providers are from Spain or UK and other subcontractors and key parties are in other locations. Coordination between them was little bit hard and challenging at the beginning but then it went smoothly on the execution of the project same as for other items.

Another big challenge is the huge amount equipment and materials to be ordered. The availability in the market may not be enough or the market is not used to provide such availability of equipment. We had to work very hard at the beginning together with EPC contractors to ensure that manufacturing is going as per plan especially for the key equipment. 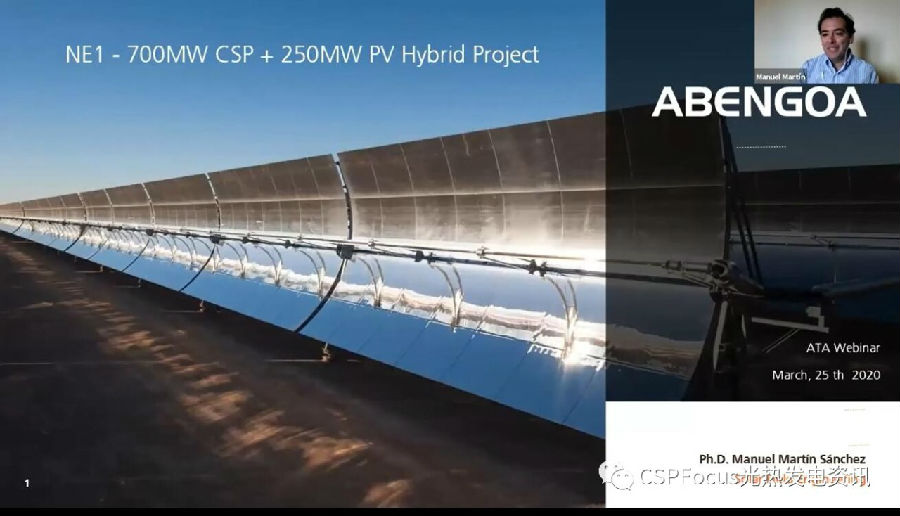 Based on the detailed share by Meriem, I would like to add some information on the parabolic trough plants. 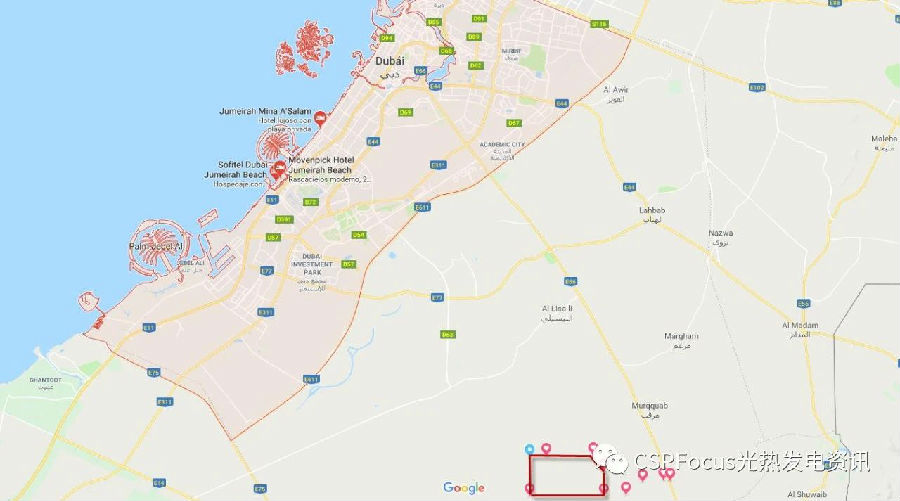 As you can see in the picture below, it shows the winter expected performance curve and summer performance curve, the black line is the gross electric power. In winter, there is no production in mid-day between 6:00-16:00 of the day when the CSP plant is off. But it’s different in the case of summer, the production lasts 24 hours for all the summer. 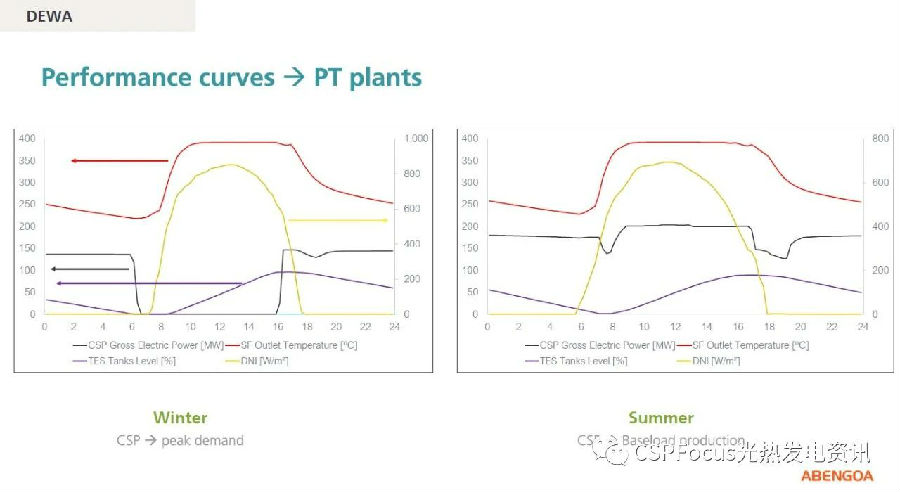 We have a contract with very serious guarantees in terms of production performance, so the purchase and engineering are very important. 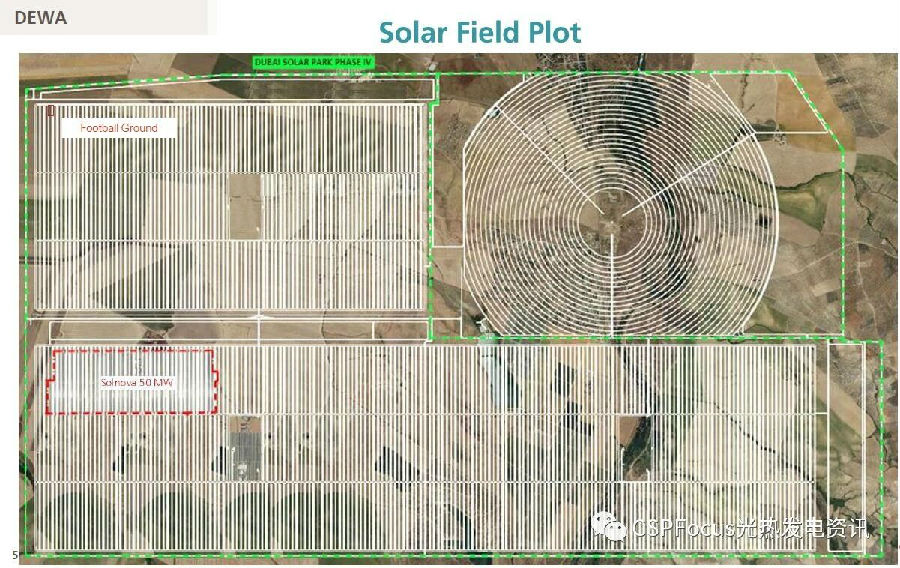 Noor Energy 1 Solar Field Plot
There are three PT plants, one is the one top left and two are on bottom of the plot. I draw on a smaller football ground on the top left in the PT 1 so that you can see the real size of approximately a football ground. And also you can see the footprint of our 50MW PT plant with no storage. In this project we’re going to construct like a 1000 football ground area full of mirrors, just for PT plants. This is really challenging. 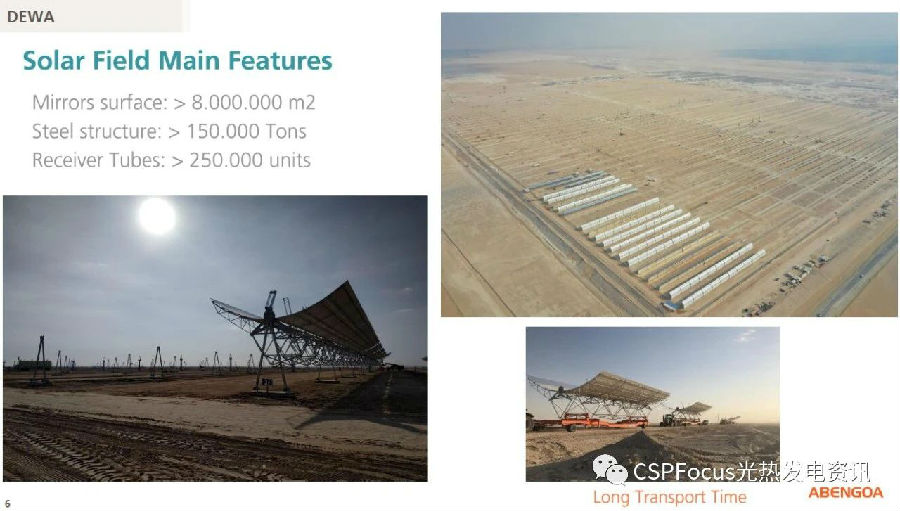 As for the status of the PT plants right now, the engineering is closed for PT 1 and all the basic engineering for the three units is almost complete. We have closed all the purchases in terms of mirrors, structures, tubes and controlling system for all the three units. It was really challenging to close some of these purchases, because the contracts were really huge.

We have to analyze the production capacity of suppliers to ensure that they were going to comply with the delivery terms. We are going to construct this in 26 months so it’s not an easy task. What else, in terms of logistics it is really important to analyze during the procurement phase how we are going to transport all these materials since we’re talking of more than 8 million square meters of mirrors. 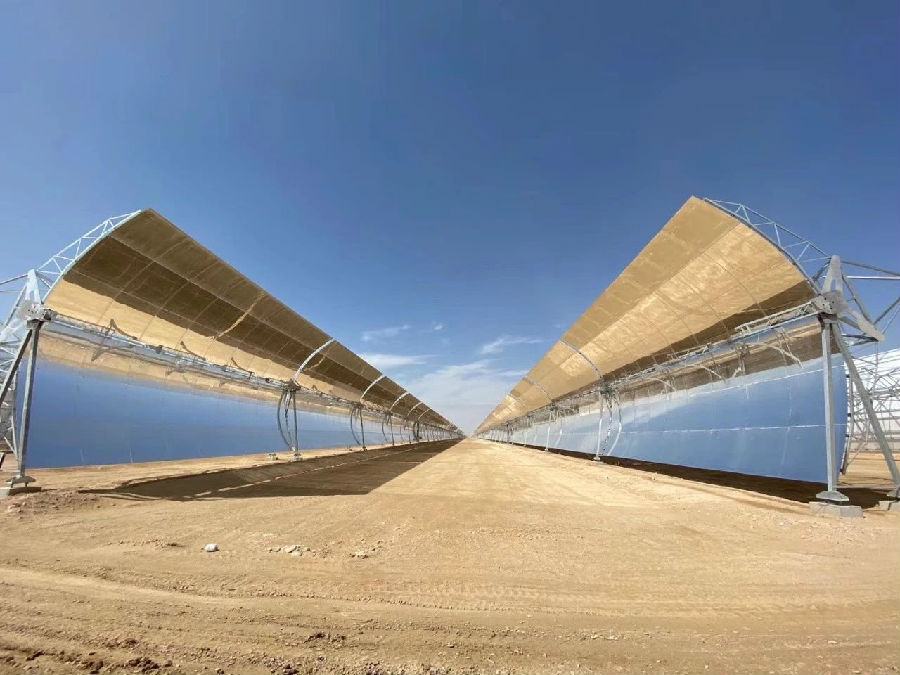 We’re expecting to produce more than 150,000 tons of steel structure and install more than 250,000 units of receiver tubes. 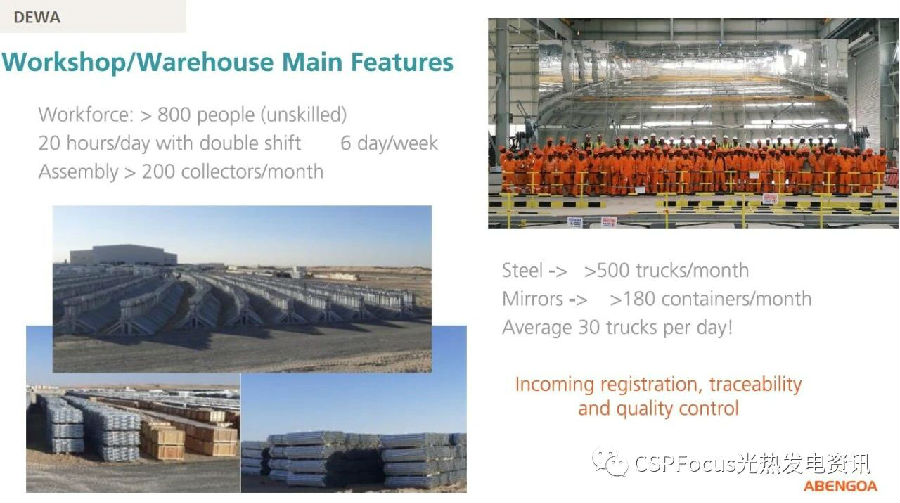 The assembly of collectors started end of last summer. Most of the personnel is unskilled, more than 800 people are working right now in this huge factory 20 hours per day, six days per week if needed to assembly, making more than 200 collectors per month to comply with the schedule of the project. We’re receiving like 500 trucks of steel per month, and close to 200 containers per month for mirrors. 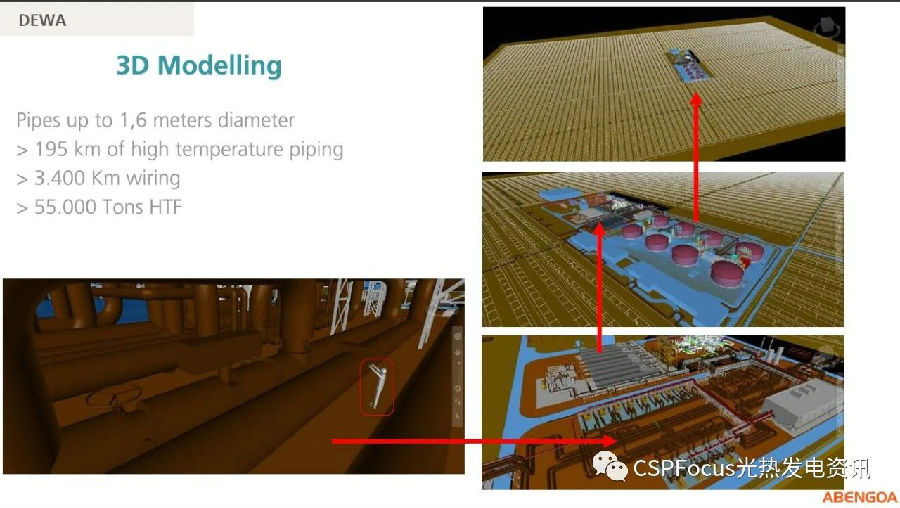 We have performed a real 3D model of the PT plants and the HTF system, which is the scope of my company. This model covers the solar field, power block and all the piping and it’s essential to work like this to avoid any problem in all the construction and operation phases.

Some figures about the project, we are designing pipes up to 1.6 meters diameter, taking use of over 55,000 tons of HTF. 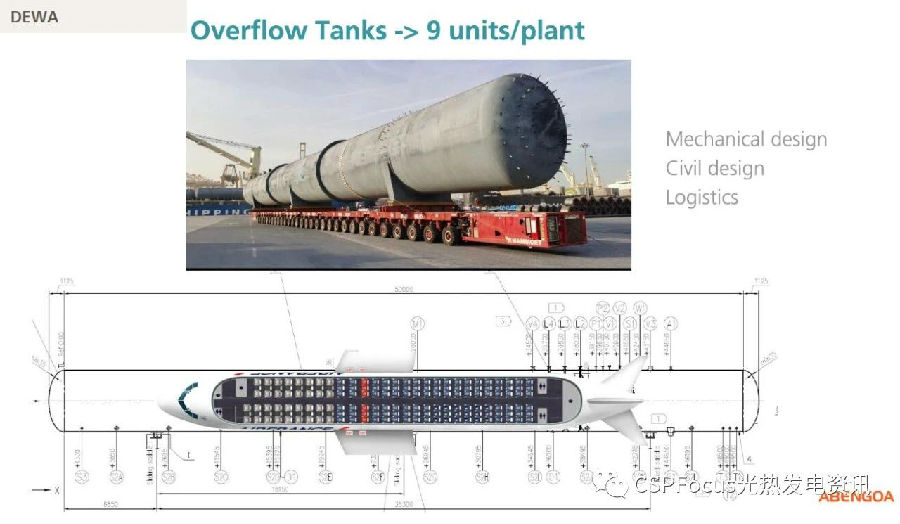 To finish I like to share with you a picture of the overflow tank, which is a component of the HTF system. We have nine units like this for every PT project, and there will be 27 units in total. Click to view the recording video of the webinar and download presentations.
Jose Santamarta2020-04-09T21:49:35+00:0009-04-2020|Categorías: BREAKING NEWS, NEWS, Sin categoría, Storage, Top News|Etiquetas: Abengoa, ACWA, CSP, DEWA, Dubai|