California became the first state to generate more than 5% of its electricity from utility solar power, according a new report from the U.S. Energy Information Administration (EIA).

One of three solar fields at the Ivanpah Solar Power Facility in California’s Mojave Desert. The concentrated solar power plants there are the largest in the world. 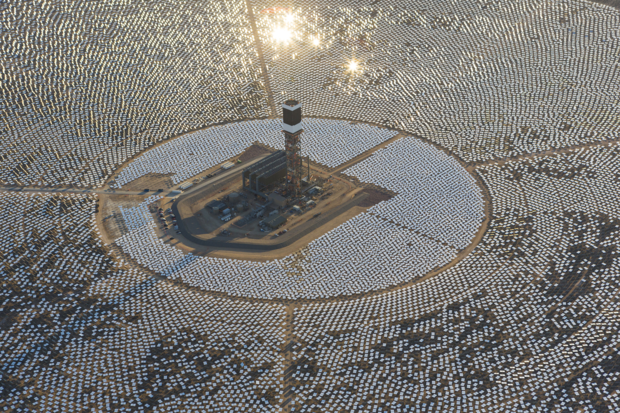 California became the first state to generate more than 5% of its electricity from utility solar power, according a new report
from the U.S. Energy Information Administration (EIA).
California’s utility-scale (1 megawatt or larger) solar plants generated a record 9.9 million mega watt hours (MWh) of electricity in 2014, an increase of 6.1 million MWh from 2013. California’s utility-scale solar energy production in 2014 was more than three times the output of the next-highest state, Arizona, and more than all other states combined, according to the EIA. 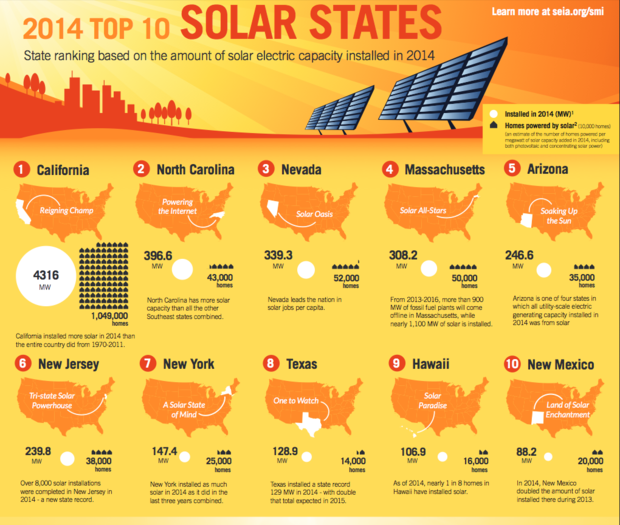 The top 10 states that have deployed solar power.
Last year, several large solar power plants were phased into operation in the Golden State. Those plants include the Topaz and Desert Sunlight 550MW solar photovoltaic plants, the 377MW Ivanpah plant
and the 250MW Genesis solar thermal plant. In total, nearly 1,900MW of new utility-scale solar capacity was added, bringing the state’s utility-scale capacity for all solar technologies to 5,400MW by the end of 2014 — enough new capacity to power more than 1.05 million typical households.
The new capacity is likely a foreshadowing of future growth nationwide and worldwide.
"We believe utility scale solar demand is set to accelerate in both the U.S. and emerging markets due to a combination of supportive policies and ongoing solar electricity cost reduction," Deutsche Bank wrote in a market research report earlier this year. 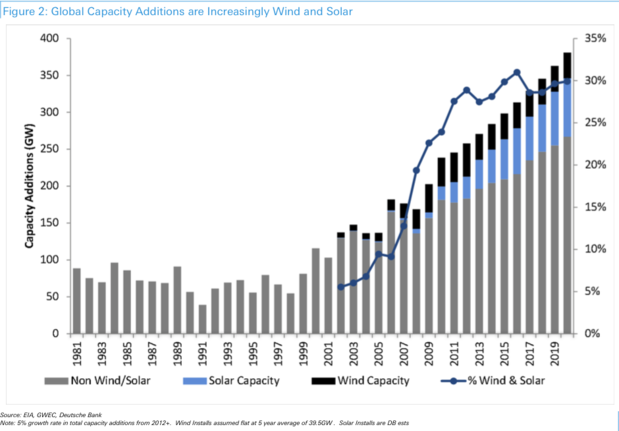 Global solar installation projections through 2017.
"Our relatively bullish view on solar is based on the assumption that retail electricity prices will continue to rise over the next few years," the report said.
Meanwhile, 22 states, plus the District of Columbia, have no utility-scale solar installed, according to the Solar Energy Industry Association. They are Alabama, Alaska, Arkansas, the District of Columbia, Idaho, Iowa, Kansas, Louisiana, Maine, Michigan, Mississippi, Missouri, Montana, Nebraska, New Hampshire, North Dakota, Oklahoma, South Dakota,  Utah, Washington, West Virginia, Wisconsin and Wyoming.
There are megawatt solar utility projects under development in both Utah and Idaho. 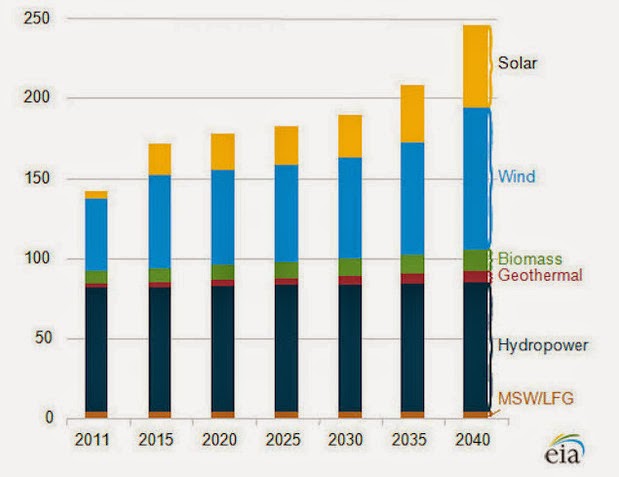 Globally, photovoltaic (PV) panel installations are expected to reach 54.5 billion watts (GW) this year, a 14% increase over 2014 and a 30% increase over the previous year, according to a new report from Mercom Capital Group
.
"Overall, we are predicting another solid year for the global solar industry," Mercom Capital stated in its report.
The U.S. solar power market is projected to grow rapidly this year with another 8.5GW of PV installations. The pace of PV installations in the U.S. is accelerating as the federal government’s solar investment tax credit (ITC) is set to expire next year. 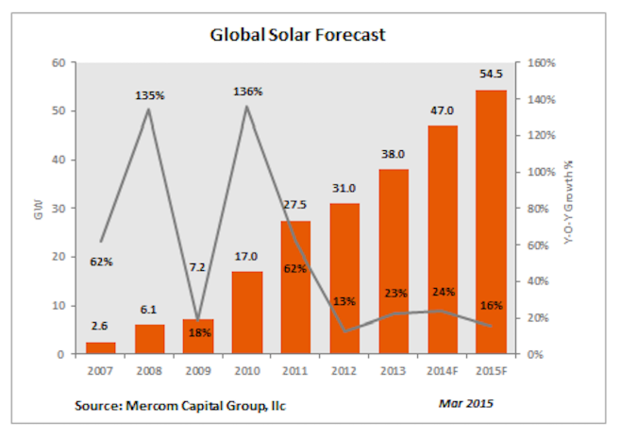 The global solar forecast for installations.

The ITC, passed in 2008, offered a 30% tax credit for residential and business installations for solar energy. When it expires in 2016, the tax credit will drop to a more permanent 10%.
China leads the world in solar demand, installing 10.6GW of new capacity last year alone. Japan and the U.S. came in second and third with about 9GW and 6.2GW installed respectively. Japan is expected to grow by another 9GW this year, according to Mercom.
While actual installation numbers for 2014 are trickling in, according to Mercom, China solar installation numbers suggest that it missed its goal of 13GW by more than 2 GW.
China also revised its 2013 actual installation figures down from 12.9 GW to 10.95 GW.
The European solar market continued its decline in 2014, primarily in  Germany, which  failed to reach 2GW of installations, a figure said by Mercom to be similar (1.9GW) in 2015.
The U.K. installed 2.2GW in 2014, although Mercom expects 2.9GW to be installed in the U.K in 2015. With India’s installation figures just out, with 883MW for 2014, Mercom said it expected significant growth in 2015, putting a target of 1.8GW on the country.