Marking the first time s-CO2 cycle will be tested in an operating CSP plant, starting this month, the French utility company EDF will partner with Chinese CSP technology manufacturer Shouhang to convert a demonstration CSP plant built three years ago at the Gobi Desert solar park at Dunhuang from steam cycle to an s-CO2 power block.

“The way that people approach risk in China is different; I think they are more open for such innovation. They don’t trust so much the modeling work; so they build it. It’s quite sad that  today it’s easier to do such projects in China than in a western country, but it makes working in China very exciting,” commented Yann Le-Moullec, EDF Chief Engineer in China R&D.

Le-Moullec, who announced the study-Retrofit of Dunhuang 10MW molten salt plant with a high temperature supercritical CO2 cycle at the Annual SolarPACES Conference 2018 in Morocco, is now working in China to implement the EDF collaboration with Shouhang, which built the 10MW plant to be used in the demonstration and was among the first to complete a 100MW tower CSP project in China’s first batch of demonstration projects.

After ten years in renewable energy R&D at EDF in France, then in China, Le-Moullec is now starting a two-year evaluation of its feasibility and the readiness of equipment suppliers in China and abroad. “With a lot of completely novel technology, suppliers might be eager to offer us some equipment, but the selection of which supplier we trust and how to qualify them, is our first issue at the moment,” he pointed out.

Why demo a not-yet-commercial power cycle so soon after commissioning steam cycle?

“Shouhang think s-CO2 could be commercially viable in three to four years perhaps, so they are moving very quickly to the “next” technology,” Le-Moullec explained. “They think that, if it could be profitable, it’s worth taking this risk.”

The s-CO2 cycle will be swapped for the steam cycle in the 10MW “display demonstrator” that Shouhang initially built at their own expense to demonstrate the heliostats, solar receiver and air-cooled condenser they manufacture. Chinese suppliers typically build such smaller showpiece plants for potential customers to demonstrate their products in action. “It’s quite competitive in China, if you don’t have a project to demonstrate that your product will work it is very hard to sell them,” Yann explained. 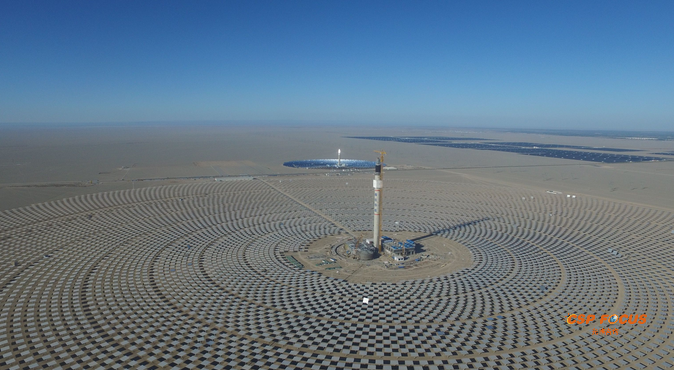 The policy of the Chinese government is to build demonstration tower CSP projects full scale: 50MW or 100MW, as the most efficient way to de-bug the engineering problems in “first sample” projects. By limiting problem-solving to just the technical aspects, developers and engineers are able to focus on just the engineering fixes needed to deploy a new technology. China’s CSP pioneers are not required to negotiate land deals, attract the lowest financing, or offer lower prices than gas, PV or wind, as in the US, Australia and Chile.

Instead, demonstration projects are typically built in a dedicated solar park, on land set aside for solar development. The government sets a guaranteed payment for power delivered for 25 years; and land rights are part of the deal. Chinese policy follows Spain’s example, where its first CSP pioneers received a uniform Feed-inTariff (FiT). A guaranteed pay rate best supports first-of-a-kind technology and births a robust engineering and supply chain. As a result of that policy, Spanish firms still dominate the CSP industry.

Although the government hopes to build a domestic supply chain, foreign firms are not ruled out when certain specifications justify it, even sometimes at a higher price. For example, Shouhang’s steam turbine for the 100 MW plant is supplied by US-based GE due to the specific requirements of the CSP industry.

Over the next two years the test takes place. The advantage of reusing the same plant is that only the steam power cycle will need replacing, reducing test time and money. The disadvantage is that it means the test will be run – for most of the time – at a lower temperature than s-CO2 cycles could handle. However, the plan is to operate at the higher temperature for a brief period in order to test the dedicated equipment.

Like their 100MW plant, the 10MW demonstration model has 15 hours of molten salt (60% NaNO3-40% KNO3) thermal storage, with molten salt as heat transfer fluid, and it operates in a typical 290°C to 560°C range, using dry-cooling. But its tower height is just 135 meters, with a 7 meter high receiver at the top, and its solar field comprises just 1,525 heliostats.

“There are two pieces of equipment that can be quite tricky, One is the molten salt to s-CO2 heat exchanger. It’s at very high pressure, very high temperature, a lot of mechanical issues have to be solved,” Le-Moullec explained. “It’s very hard to decide which is the best option, and how it can work. No one has experience, so there is no proof of working design. The other is the compressor. We optimize the cycle design in order to have a simple compressor, because compressing CO2 from its critical point with high efficiency is very new.”

The operation of the system will be a challenge too. Because it is a Brayton cycle, there is no accumulation in the loop: you cannot buffer the CO2 as you do with water in a steam cycle.  “Your CO2 has to run through the compressor and the compressor has to operate at their nominal speed driven by the turbine,” Le-Moullec explained. “We decided to select a recompression design and to adapt it for our small demo with small equipment, but it has never been done with such a layout.”

Once suppliers are selected and parts built, the demo should be online by the end of 2020. To meet this goal of commercial s-CO2 in a CSP plant within five years, they must solve these technical problems over the next two. Then, if it is successful, Le-Moullec says the target is to start deploying this technology commercially in less than four to five years.