Concentrating solar power plants produce electric power by converting the sun’s energy into high-temperature heat using various mirror configurations. The heat is then channelled through a conventional generator. The plants consist of two parts: one that collects solar energy and converts it to heat, and another that converts heat energy to electricity. 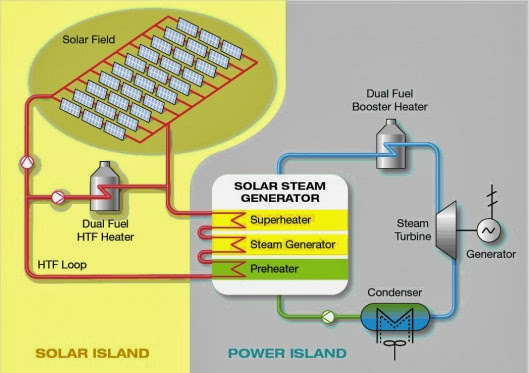 Concentrating solar power systems can be sized for village power (10 kilowatts) or grid-connected applications (up to 100 megawatts). Some systems use thermal storage during cloudy periods or at night. Others can be combined with natural gas and the resulting hybrid power plants provide high-value, dispatchable power. These attributes, along with world record solar-to-electric conversion efficiencies, make concentrating solar power an attractive renewable energy option in the Southwest and other sunbelt regions worldwide. There are four CSP technologies being promoted internationally. For each of these, there exists various design variations or different configurations.  The amount of power generated by a concentrating solar power plant depends on the amount of direct sunlight. Like concentrating photovoltaic concentrators, these technologies use only direct-beam sunlight, rather than diffuse solar radiation. 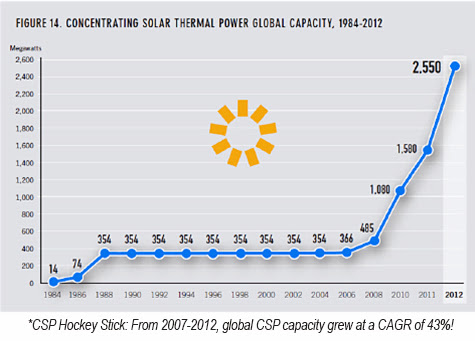 The 10 MW Solar One power tower was developed in Southern California in 1981, but the parabolic-trough technology of the nearby Solar Energy Generating Systems (SEGS), begun in 1984, was more workable. The 354 MW SEGS is still the largest solar power plant in the world, and will remain so until the 390 MW Ivanpah power tower project comes online.

The sun’s energy is concentrated by parabolically curved, trough-shaped reflectors onto a receiver pipe running along the inside of the curved surface. This energy heats oil flowing through the pipe, and the heat energy is then used to generate electricity in a conventional steam generator.

A collector field comprises many troughs in parallel rows aligned on a north-south axis. This configuration enables the single-axis troughs to track the sun from east to west during the day to ensure that the sun is continuously focused on the receiver pipes. Individual trough systems currently can generate about 80 megawatts of electricity.

Trough designs can incorporate thermal storage—setting aside the heat transfer fluid in its hot phase—allowing for electricity generation several hours into the evening. Currently, all parabolic trough plants are "hybrids," meaning they use fossil fuel to supplement the solar output during periods of low solar radiation. Typically a natural gas-fired heat or a gas steam boiler/reheater is used; troughs also can be integrated with existing coal-fired plants. 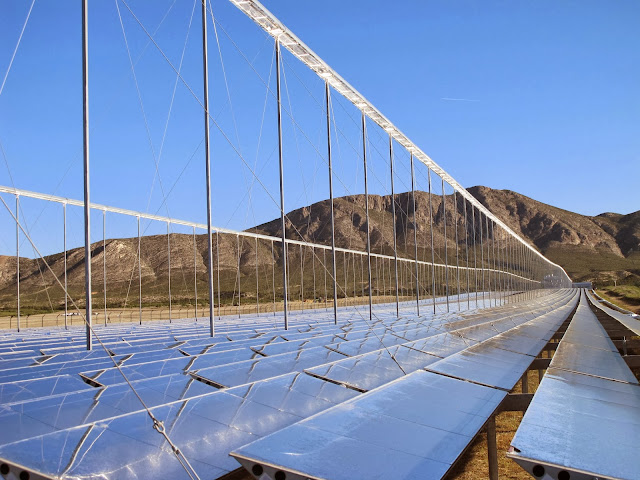 Another option under investigation is the approximation of the parabolic troughs by segmented mirrors according to the principle of Fresnel.
For more information about parabolic troughssee Technology Characterization Solar Parabolic Trough (PDF 303KB)
Power Tower Systems
A power tower converts sunshine into clean electricity for the world’s electricity grids. The technology utilizes many large, sun-tracking mirrors (heliostats) to focus sunlight on a receiver at the top of a tower. A heat transfer fluid heated in the receiver is used to generate steam, which, in turn, is used in a conventional turbine-generator to produce electricity.
Early power towers (such as the Solar One plant) utilized steam as the heat transfer fluid; current US designs (including Solar Two, pictured) utilize molten nitrate salt because of its superior heat transfer and energy storage capabilities. 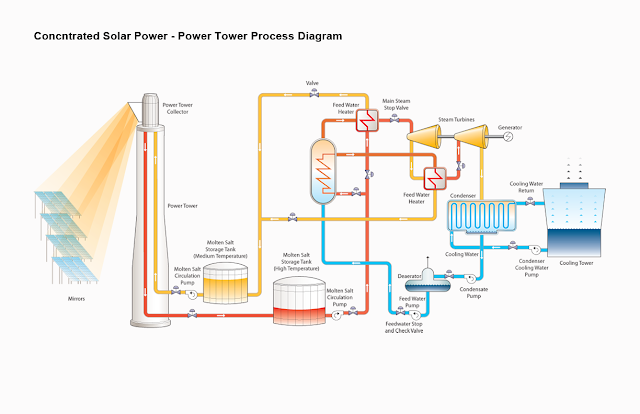 Current European designs use air as heat transfer medium because of its high temperature and its good handability.
Individual commercial plants will be sized to produce anywhere from 50 to 200 MW of electricity.
For more information see Technology Characterization Solar Power Towers (PDF 304KB)
Solar Dish Systems
Parabolic dish systems  consist of a parabolic-shaped point focus concentrator in the form of a dish that reflects solar radiation onto a receiver mounted at the focal point. These concentrators are mounted on a structure with a two-axis tracking system to follow the sun. 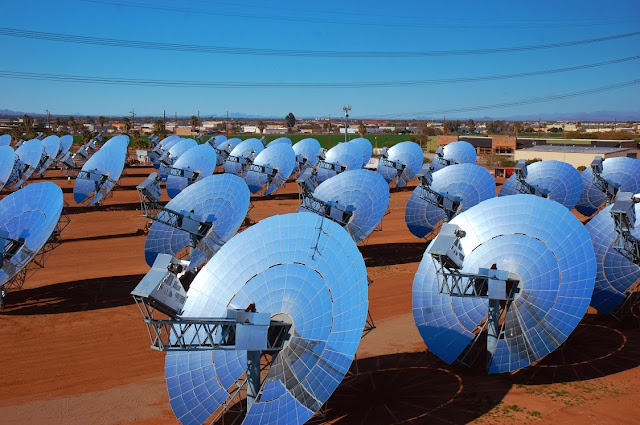 The collected heat is typically utilized directly by a heat engine mounted on the receiver moving with the dish structure. Stirling and Brayton cycle engines are currently favored for power conversion. Projects of modular systems have been realized with total capacities up to 5 MWe. The modules have maximum sizes of 50 kWe and have achieved peak efficiencies up to 30% net.
For more information see Technology Characterization Solar Dish Systems (PDF 888KB)