Concentrated solar power (CSP) in conjunction with thermal storage could provide South Africa with grid stability during peak periods when electricity was most needed.

Concentrated solar power (CSP) in conjunction with thermal storage could provide South Africa with grid stability during peak periods when electricity was most needed, enolcon MD Günter Schneider said on Thursday at the launch of the 2030 CSP Strategy Study for South Africa.

The study, titled ‘Assesment of the localisation, industrialisation and job creation of CSP infrastructure projects in South Africa – a 2030 vision for CSP’, which was undertaken by enolcon and EY on behalf of the Department of Trade and Industry, the German Development Corporation and the Southern Africa Solar Thermal and Electricity Association (Sastela), found various potential advantages linked to the roll-out of CSP in South Africa.

“South Africa’s electricity supply is getting more and more constrained and the unique storage benefit of CSP could assist with this. This is currently the only technology that offers the storage option South Africa needs,” Sastela chairperson Ayanda Nakedi said.

Other advantages included South Africa’s high levels of direct normal irradiation (DNI), especially in the Northern Cape where DNI levels where some of the highest in the world, and the environment-friendliness of the technology. 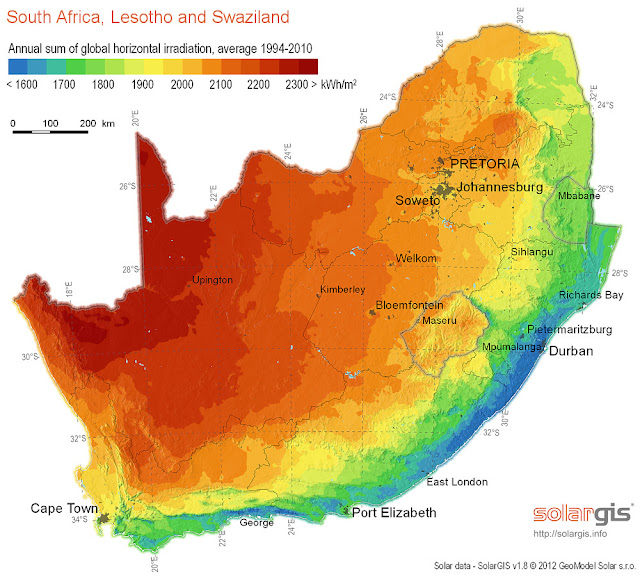 CSP power plants also had a competitive lifespan of up to 60 years, which was similar to that of coal and nuclear power plants.

Further, the development of CSP in South Africa could also have significant socioeconomic benefits, such as job creation, gross domestic product growth and international trade and energy security, Schneider said.

The study estimated that 17,000 direct, indirect and induced jobs could be created through the development of a Northern Cape Solar Corridor, which was currently under consideration by the Department of Energy for deployment in 2025. The corridor would include the production of 5 GW of CSP power for local consumption, as well as an additional 1 GW for export to other Southern African countries, EY’s Bruce Harvey said.

Also speaking at the launch, Mel Blackford, who also formed part of the EY team working on the study, said South Africa’s strong local supply chain could support the development of CSP, as technology that had been developed by other industries, such as the coal industry, could potentially be adapted to the CSP industry.

South Africa also had a strong research and development base that could support CSP development.

However, according to the 40 CSP players that responded to the survey, there were a number of disadvantages to entering the CSP space in South Africa.

She added that, currently, the main barrier to the creation of a local CSP market was the uncertainty of the CSP supply chain, as it was not known how many CSP projects would come on line.

She stated that, should the amount of future CSP projects become known, and if these were to come on line in a phased manner, it would lead to more certainty among manufacturers and investors who were considering entering the CSP space.

Meanwhile, the report also highlighted short-term opportunities for South African manufacturers to get involved in the development of CSP plants.

“These are areas in which the challenges identified could be overcome in the near term,” Blackford explained.

Further, areas in which South African companies could potentially participate with the assistance of joint venture partners for the transfer of technology and skills included the storage of CSP power, the manufacturing of curved mirrors and the development of heat exchange technology.

Lastly, long-term opportunities for local companies were also identified in areas such as the manufacturing of receivers and molten salt pumps, she said.
Harvey stated that, moving forward, the report firstly suggested that the country, and government, had to review the megawatt allocation to CSP with storage, while keeping the technology’s benefits, such as the affordability of peak power and job creation, in mind.

Further, it was important for the South African market to confirm the CSP component focus areas, as well as to review the feasibility of a long-term research and development funding profile with dedicated funding for CSP focus areas.

He added that the industry also had to be marketed to create a steady pipeline of future projects and that education in CSP-specific skills had to be considered.

“The window of opportunity for CSP is now,” Harvey said, emphasising that South Africa had to make use of this opportunity before it passed.