Before backing out, PSH had received a provisional approval to build one 250 MW tower first, and then to separately attempt to permit a second tower – only on condition that it includes storage. 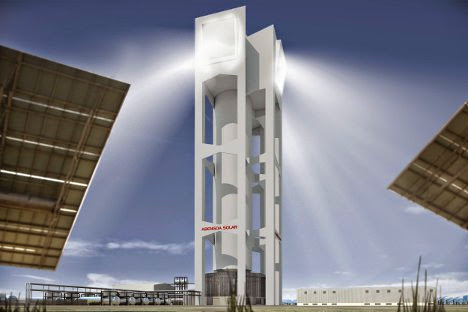 When PSH bowed out most unexpectedly after getting a conditional approval, but too late for the 2016 completion that would allow investors to take a short lived investment tax credit, BrightSource spokesman Joe Desmond made a comment that has turned out to be prescient.

“The project technically is still active at the federal level. It’s a good site for solar DNI, it has access to transmission, and it’s adjacent to another solar project, so it’s a good location,” he said then. “So I’m sure there will be an opportunity in the future. Hopefully sooner rather than later.”

The Concentrated Solar Power (CSP) project will now incorporate Abengoa’s technology, including a large storage system, to better meet the needs of  California.

“We worked closely with Abengoa on making sure that the plant isn’t just running at full production, but that it’s running at the times that we want it to,” says APS spokeswoman Jenna Shaver. “Our peak is typically between 4 and 7 at night when our customers are getting home at night and starting to turn on the oven, the heater, the A/C in the summer.”

“Large-scale storage systems can provide many hours of full load capacity for base load and peaking applications, which makes this technology highly manageable, enabling it to supply electricity in a stable way, 24 hours a day,” Abengoa tells CSP Today.

“With storage, we can respond to electricity demand at any time, adapting production to grid electric power demand profiles, independently of the presence of the sun and the time of the day or night.” Pumped hydro accounts for most US energy storage. Surprisingly, Solana supplies the next.

The 1,680 megawatt hours of thermal energy storage at Solana actually accounts for the most storage in the US after hydro, according to Chet Lyons, Principal of Energy Strategies Group (ESG).

“I was surprised when I looked at this,” says Lyons. “That is a large amount of megawatt hours, when you compare it to the current production of battery-based stationary storage. Just that one plant. These are not little toys. These are big giant things.”

“The salt freezes at below 500º, so they’ve got a relatively tight and less efficient differential from 500 to 700º F for collecting the energy, whereas we have from 500 to 1,050º F – giving us two and a half times the storage capability per pound of salt.”

But even with trough, storage demonstrably adds capacity factor. Solana generated 89,248 MWh in its first quarter, 111,128 MWh in its second, and 203,777 MWh in its third quarter.

Solana offtaker APS said early this year that they were very happy with the performance. The utility especially appreciated the ability to get power at odd hours such as before sunrise next day, on demand. APS recently asked regulators to require energy storage in lieu of at least 10% of planned peaker capacity.

“Because they don’t run much, “peaker plants” are by design the cheapest and least efficient fossil generators. When they do run they cost a lot to operate and produce more air pollution than other types of fossil generation.”

Lyon’s white paper, Guide to Procurement of Flexible Peaking Capacity: Energy Storage of Combustion Turbines notes the CAPEX for a 4-hour peaker amounts to $348 per kilowatt hour of installed capacity. He predicts that batteries will provide cheaper storage than simple cycle peaker plants by 2017 or soon thereafter.
“CSP thermal storage is more than an order of magnitude cheaper when compared to the benchmark, which is chemical batteries,” Lyons points out.

“Depending on location, battery energy storage on a per kilowatt installed basis might be more like $500 compared to $15 per kilowatt of installed capacity of solar thermal storage.”

Abengoa says that storage was a key consideration because it provides not just dispatchability – but also cost savings.

“An increase in storage capacity can result in lower generation costs, so storage is also a relevant component in determining the cost of our plants,” a company spokesman explains. 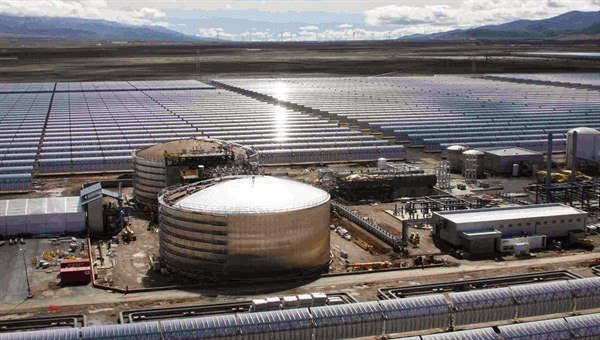 Aspects of the new Palen tower CSP project would not need new permitting. The site is on a 100-some mile stretch of Riverside County’s Hwy 10, about equidistant from Blythe at the Nevada border, and from the Indio at the other end across from Joshua Tree National Park.

A good portion of the previous permitting dealing with physical and biological aspects of the site could be recycled in a new proposal, according to a solar professional familiar with California’s CSP permitting. He does not anticipate avian mortality giving opponents ammunition.

A full year of Ivanpah tallies would be available to the next round, giving regulators an even better idea of the effectiveness of humane avian deterrents. 133 birds were singed by solar flux near the three towers at the closely monitored Ivanpah power tower CSP project over the first 6 months, and avian deterrent technologies were put in place. As the first US tower CSP, Ivanpah served as the testbed.

The new round of permitting would focus on the changed technical configuration comprising a single, lower tower and storage. Some insiders are suggesting that 150 MW might be the size chosen.