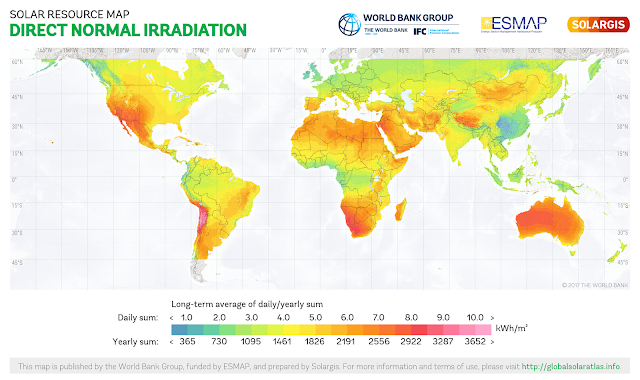 This solar resource map provides a summary of the estimated solar energy available for power generation and other energy applications. It represents the average daily/yearly sum of direct normal radiation (DNI) covering the period from 1994/1999/2007 (depending on the geographical region) to 2015. The underlying solar resource database is calculated by the Solargis model from atmospheric and satellite data with 15-minute and 30-minute time step respectively, and a spatial resolution of 1 km. Further details available from: https://globalsolaratlas.info.

Concentrated solar power had a global total installed capacity of 6,451 MW in 2019, up from 382 MW in 2018. Spain accounted for almost half of the world’s capacity, at 2,300 MW, despite no new capacity entering commercial operation in the country since 2013. The United States follows with 1,740 MW. Interest is also notable in North Africa and the Middle East, as well as India and China. The global market was initially dominated by parabolic-trough plants, which accounted for 90% of CSP plants. Since about 2010, central power tower CSP has been favored in new plants due to its higher temperature operation (up to 565 C) than trough (up to 400 C), which promises greater efficiency.

Among the larger CSP projects are the Ivanpah Solar Power Facility (392 MW) in the United States which uses solar power tower technology without thermal energy storage. In the MENA region, the Ouarzazate Solar Power Station came online in Morocco in 2017.

It combines trough and tower in three sections for a total of 510 MW with several hours of energy storage.

Morocco began its second large CSP project at Midelt as of mid 2019, at 800 MW, with 5 hours of thermal energy storage daily, and combining trough CSP and PV It was bid in mid-2019 at just $70/MWh the lowest price CSP to date.

The DEWA project in Dubai, under construction in 2020, held the world record for lowest CSP price in 2017 at $73 per MWh for its 700 MW combined trough and tower project; 600 MW of trough, 100 MW of tower with 15 hours of thermal energy storage daily.

Because they both utilize the sun’s energy, CSP is often compared to photovoltaic solar (PV), which experienced huge growth in recent years due to falling prices for panel manufacturing and modular growth.
However, there are the following differences. which result in CSP being in a competitive market against gas for peak generation in the evening, rather than competing against PV in the daytime CSP utilizes a different form of insolation than PV, Direct Normal Irradiation (DNI) best found in desert regions, while PV uses Global Horizontal Irradiation (GHI) which is more widely available globally, even at higher latitudes.

As a thermal energy generating power station, CSP has more in common with thermal power stations such as coal or gas or geothermal. A CSP plant can incorporate thermal energy storage, which stores energy either in the form of sensible heat, or as latent heat (for example, using molten salt), which enables these plants to continue to generate electricity whenever it is needed, day or night. This makes CSP a dispatchable form of solar. Dispatchable renewable energy is particularly valuable in places where there is already a high penetration of photovoltaics (PV), because an evening peak is created as PV ramps down at sunset (a phenomenon referred to as the duck curve).

CSP represented less than 2% of worldwide installed capacity of solar electricity plants. However, in recent years the falling prices of CSP plants are making this technology competitive with other base-load power plants using fossil and nuclear fuel even in high moisture and dusty atmosphere at sea level, such as the United Arab Emirates.
Base-load CSP tariff in the extremely dry Atacama region of Chile reached below ¢5.0/kWh in 2017 auctions.