For countries such as Japan or South Korea with poor DNI and little space for wind and solar, the value of hydrogen is that it can be made overseas with renewable energy, then stored and shipped, and used to produce electricity, heat, or propulsion. This way, regardless of local solar or wind resource, any economy could run carbon-free.

Japan has a long-term plan to develop and deploy a hydrogen-based energy system, that its government unveiled in 2017 in The Hydrogen Society. One way that Japan plans to produce hydrogen would be in solar thermochemical reactors in the world’s sunny regions like Australia. There, solar reactors would concentrate direct heat from sunshine to catalyze the chemistry process. Then this clean fuel would be shipped by tanker similarly to how fossil fuel is now shipped around the world.

“It would be potentially quite lucrative for Australia, because Japan – and also South Korea actually – they don’t have any indigenous energy resources and they therefore rely on energy imports,” noted Wes Stein, who heads up CSIRO’s concentrated solar thermal hydrogen research in Australia.

“Because we are already exporting a lot of energy – coal and LNG – to Japan we know the logistics and all the relationships there of transporting energy to Japan and so in a sense just transporting a different energy product it is not going to be too big a stretch of the imagination.”

Solar hydrogen researchers aim to replace the way hydrogen has been made from a fossil fuel, with the heat supplied by burning more fossil fuel. Instead, H2O (water) is split to extract the H2 (hydrogen), and to heat the thermochemical reaction…

“To make hydrogen we need a temperature of more than 1400°C for the ceria step. It is not difficult,” noted Niigata University assistant professor Selvan Bellan who directs solar thermal research in Japan. “With a concentrating solar system we can produce heat at these temperatures, and so we can produce hydrogen this way.”

“It takes two steps to produce hydrogen, to split it,” he explained. “The first step is to strip the CeO2 into CeO at more than 1400°C. After the thermal reduction step to reduce the metal oxide, in the next step, hydrogen would be produced through hydrolysis at around 800°C. Our research is focused on producing hydrogen through this two-step process using cerium oxide.”

(To create all the component parts for such a completely new solar hydrogen industry, engineering solutions are being invented worldwide, not just in Japan, but in Germany and in Australia, in Switzerland, and this year in China.)

A fluidized bed receiver/reactor for beam down solar

The Japanese team believes they have the optimal solution for the state-of-the-art technique for making hydrogen from water with concentrated solar thermal energy; a two-step water splitting process, using ceria (CeO2). They have developed a fluidized bed receiver/reactor in which to perform this operation.

Combination receiver/reactors are commonly used in making thermochemical solar fuels like hydrogen. But in this research field, designs for how the solar heat would be received and then contained inside a reactor are still very unsettled. 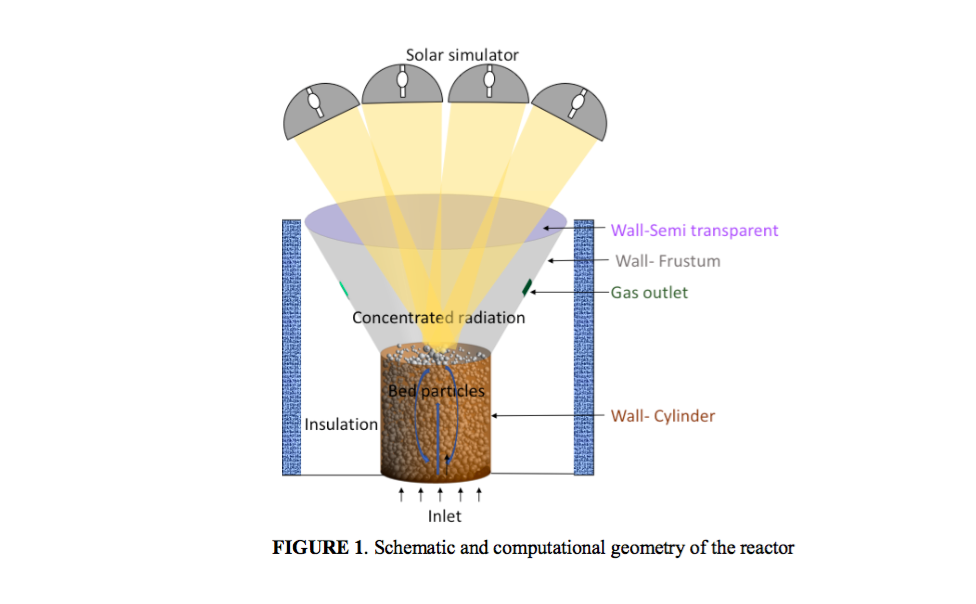 So what is a fluidized bed receiver/reactor, and why beam down?

A fluidized bed is a container in which heated particles can be suspended by floating, explained Bellan.

“A particle “cloud” is suspended in a gas stream. We would like the particles to remain inside the reactor for longer, and when we are suspending particles in a gas stream, the gas would behave like a fluid, and the particles remain longer. The heat transfer is very high, so it’s a more efficient way of transferring heat. We use ceria particles and nitrogen gas and steam. Using these three materials we reform and we will produce hydrogen.”

The reactor for heating these solar thermochemistry reactions is generally assumed to be high on a central tower, like a tower CSP power generating plant, with the solar field concentrating sunlight up into it.

But an alternative to tower, that some solar fuels researchers are considering is “beam down” where the reactor would be situated at ground level. (For example, Saudi and French researchers are testing a beam down design in the UAE and a Chinese-Finnish team is about to test at 450kW beam down system in China.) The solar field would first concentrate sunlight up into a central mirror, but then beam it down onto a ground-level reactor. Bellan explained the advantages of beam down over a tower for a fluidized bed.

“It is very difficult to create a fluidized bed in the tower as the radiation is coming from the wrong direction,” he explained. “A particle cloud is created inside the receiver so the particles hit the glass receiver. It is an extremely difficult task to avoid the particles hitting the wall and then blocking the solar flux. But with beam down, we can create a fluidizing particle bed inside the reactor: this is the advantage.”

The disadvantage? “We do lose some radiation by using two mirror sets for beam down. But on the other hand, a fluidized particle cloud reactor can really only be manufactured for a horizontally oriented concentrating system like a beam down.”

The Niigata University 30kW initial test of the fluidized bed receiver/reactor was performed using lamps to stand in for actual on-sun conditions. The test was successful and validated the modeling set out in the team’s theoretical paper presented at the SolarPACES Conference in Morocco: Heat Transfer and Fluid Flow Analysis of A Fluidized Bed Reactor for Beam-Down Optics.

The fluidized bed was able to reach the temperatures they needed to, and produce hydrogen.“In our experimental conditions we can reach up to 3000 kW per square meter flux, so this is the maximum. And the lowest flux is up to 500 kW per square meter, so we are happy with our demonstration system. Using the 30 kW reactor in 20-30 minutes we were able to produce 12 liters of hydrogen. That means for the fluidized bed it was a good result.”

Following the 30kW test indoors with simulated sunlight, they tested at 100kW outdoors at Japan’s Miyazaki outdoors test site for testing components. But Japan’s solar resource is very poor. By factoring that in, the researchers are able to extrapolate the success of the fluidized bed in a more normal DNI environment for producing concentrated solar thermal energy.

“At Miyazaki, we produced a little hydrogen. So the reactor around the central bed reached around 1250 Kelvin and outlet gas temperature was around 1000°C. So this was OK – but not good.”

Next, Japan will test outdoors at CSIRO in Australia

Like the rest of Japan, the site at Miyazaki does not have a solar resource capable of adequate heat concentration for hydrogen production. In commercial operation, these solar hydrogen production facilities would be sited in sunnier desert lands like Australia, which has long been an energy trading partner with Japan, with the hydrogen shipped to Japan.

“We can convert the sunlight into hydrogen in Australia and then the hydrogen would be converted into liquid fuels and then it would be imported to Japan by ships,” Bellan said.

So the next step is to test this component outdoors in real sun in Australia, at the CSIRO testing site. Australia’s vast uninhabited desert interior is ideally suited for an export solar energy industry and the country’s national energy department actively supports the development of a new solar hydrogen export industry to replace its current coal exports.

“We’ve already got a project through ARENA, with CSIRO,” said Bellan. “The reactor construction is going on now, at CSIRO in Newcastle.”