The Shams 1 thermosolar plant – in the desert of Abu Dhabi, capital of the United Arab Emirates – adds 100 megawatts (MW) of sustainable, renewable electricity to the national grid, which otherwise consumes fossil fuels.

“The UAE’s investment in renewable energy offers the region a pragmatic path to reducing per capita carbon emissions, which are currently among the highest in the world,” said IRENA’s Director-General, Adnan Z. Amin. “IRENA congratulates the UAE and Abu Dhabi on the Shams 1 inauguration as well as the visionary energy transition strategy behind it. Projects like this will also show how renewable energy bolsters the entire value chain – from research and development, to manufacturing, to on-the-ground power projects.” 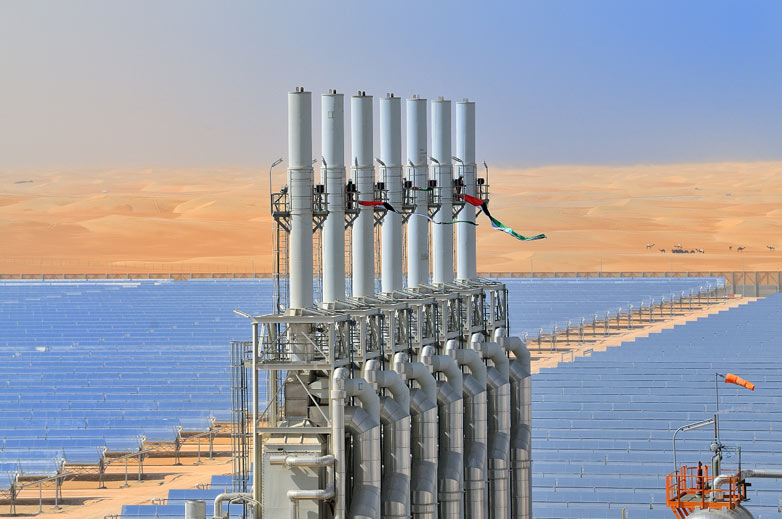 Abu Dhabi also hosts IRENA’s headquarters, having won competitive bidding ahead of the global Agency’s establishment in 2011. IRENA is the first major international organisation established in decades, and the first-ever to be headquartered in the Middle East.

Shams 1, located in the Emirate’s Western Region, follows a ground-breaking 10 MW solar PV site at the Masdar City clean energy complex. Pioneering research at the Masdar Institute, including work on solar storage and dust control, aims to unleash the uptake of solar energy around the region.

Most of the region’s 1 GW of commissioned renewable energy capacity today consists of North African wind power projects. Morocco also has a 160 MW solar project in the works in Ouarzazate. Yet major oil exporters in the Gulf Cooperation Council (GCC) have also recognised renewable energy as their best long-term economic choice, as excessive domestic oil consumption undermines high-margin export opportunities. Abu Dhabi, for example, aims to cover 7 per cent of its installed capacity from renewables by 2020.

The International Renewable Energy Agency (IRENA) is mandated as the global hub for renewable energy cooperation and information exchange by 109 Members (108 States and the European Union). Over 50 additional countries are in the accession process and actively engaged. Formally established in 2011, IRENA is the first global intergovernmental organisation to be headquartered in the Middle East.

IRENA supports countries in their transition to a sustainable energy future, and serves as the principal platform for international cooperation, a centre of excellence, and a repository of policy, technology, resource and financial knowledge on renewable energy.  IRENA promotes the widespread adoption and sustainable use of all forms of renewable energy, including bioenergy, geothermal, hydropower, ocean, solar and wind energy in the pursuit of sustainable development, energy access, energy security and low-carbon economic growth and prosperity. www.irena.org