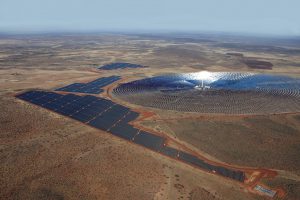 ACWA Power, a leading Saudi developer, investor and operator of power generation and water desalination plants in 13 countries and the lead shareholder in the Redstone concentrated solar power (CSP) plant, announced the commencement of construction on the 100 MW Redstone project following achievement of financial close.

Through the successful mobilisation of international project finance, Redstone CSP has facilitated approximately ZAR 7 billion in foreign direct investment to fund and support the strategic energy transition goals of the country. ACWA Power’s co-shareholders in the project include the Central Energy Fund, Pele Green Energy and the local community.

The Redstone plant will be equipped with a 12-hour thermal storage system that will deliver clean and reliable electricity to nearly 200,000 households round the clock. Commencement of operations is scheduled for Q4 2023. 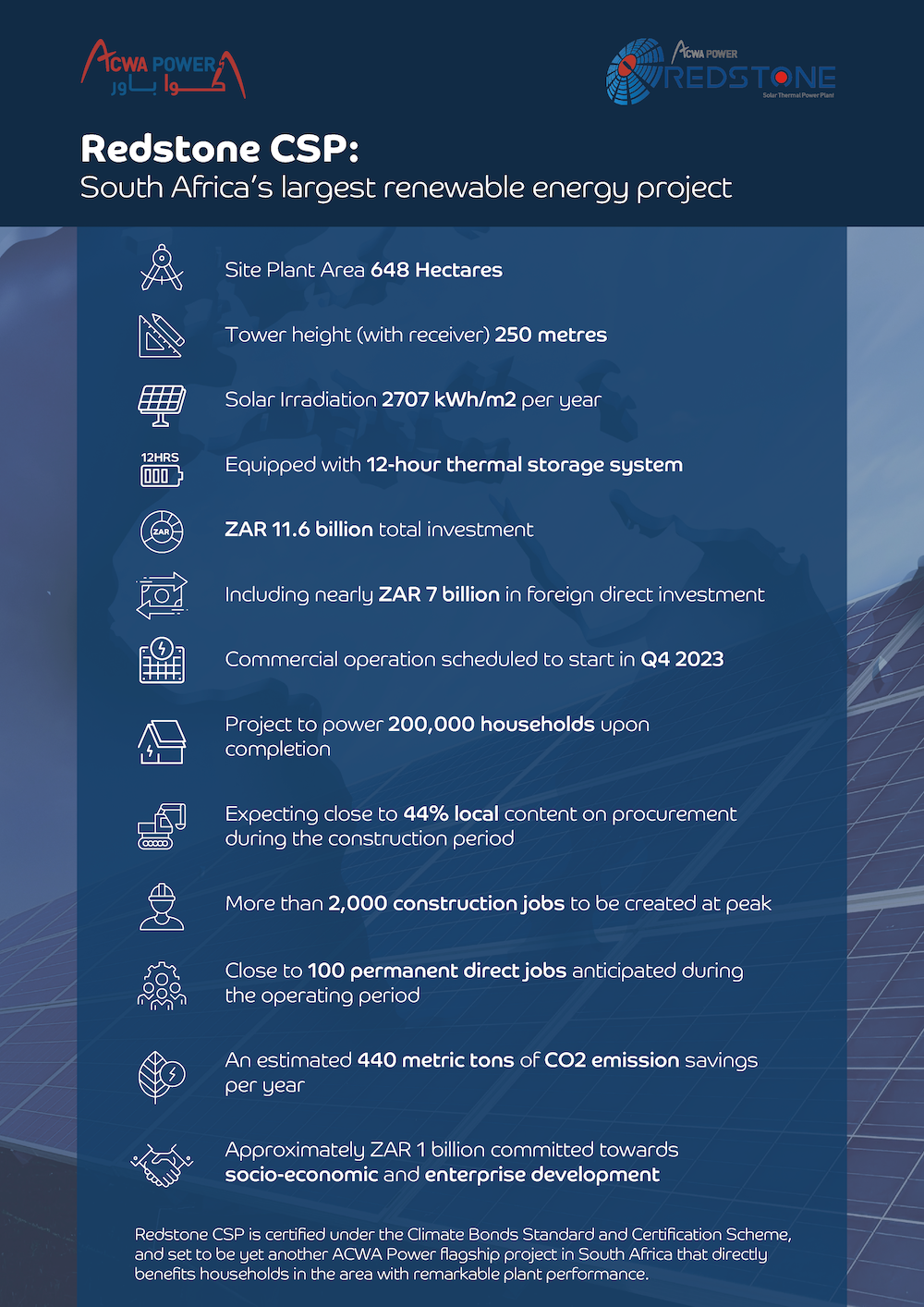 Commenting on the occasion, Paddy Padmanathan, President and Chief Executive Officer of ACWA Power, said: “ACWA Power is proud to lead the energy transition in countries that are committed to ambitious renewable energy targets to support economic growth and social development. Redstone CSP adds another superlative to our budding record in South Africa, being the largest renewable energy investment to date. As grid links are improved, the ingenuity of the private sector together with the great support of experienced finance partners has the potential to spark lasting impact for local communities and address the threats of climate change.”

Mr. Rajit Nanda, Chief Portfolio Management Officer and Acting CIO for ACWA Power, added: “We are proud to play a key role in supporting South Africa’s decarbonisation efforts, and are grateful to our partners for contributing to our mission to reliably and responsibly deliver power and desalinated water at an affordable cost. Following in the footsteps of the record-breaking Bokpoort CSP and deploying the same thermal salt storage system, Redstone CSP is set to be yet another ACWA Power flagship project in South Africa that directly benefits households in the area with remarkable plant performance.”

Redstone CSP will displace an estimated 440 metric tons of CO2 emissions per year. The project is certified under the Climate Bonds Standard and Certification Scheme and aligned with the goals of the Paris Climate Agreement which seeks to limit global warming to under 2 degrees Celsius. In addition to efficiently delivering clean energy to the national grid, the Redstone project will also offer tangible socioeconomic value through offering job opportunities and utilising local supply chains. The project will reach close to 44% local content on procurement during the construction period; create more than 2,000 construction jobs at peak, with about 400 from the local community; and create approximately 100 permanent direct jobs during the operating period. As part of its implicit social contract, Redstone CSP will provide value-adding ancillary services required by the system operator at no cost to the local public utility Eskom, which marks a first for a renewable energy plant in the country.

About ACWA Power ACWA Power is a developer, investor and operator of power generation and desalinated water production plants. Registered and established in 2004 in Riyadh, Saudi Arabia; ACWA Power employs about 3,500 people and is currently present in 13 countries in the Middle East, Africa, Central Asia and Southeast Asia. ACWA Power’s portfolio includes 62 assets with an investment value of USD 65 billion, producing 42 GW of power and 5.8 million m3 /day of desalinated water delivered on a bulk basis to address the needs of state utilities and industries on long term, off-taker contracts under utility services outsourcing and Public-Private-Partnership models. ACWA Power’s mission is to reliably deliver electricity and desalinated water at a low cost, thereby contributing effectively to the sustainable, social and economic development of communities and countries. ACWA Power is committed to the values of Safety, People and Performance in operating its business across all geographies. For more information, please visit www.acwapower.com.