Nearly 40 years have passed since concentrated solar power first saw its commercialization in 1980s. Its position in the global power supply structure has been gradually enhanced. According to CSPPLAZA, by the end of 2017, the global installed CSP capacity has reached 5133MW.

Spain remains the world leader in existing CSP capacity as an established CSP market, with 2.3 GW in operation, followed by the United States with 1.7 GW. However, both countries have suffered from CSP market decline due to the government’s cancellation of policy support for CSP, and few new CSP plants have been installed in recent years.

This doesn’t prove to be the obstacle of the development of global concentrated solar power. As CSP technology getting more economical, important emerging markets such as Morocco, Saudi Arabia, China and South Africa are rising rapidly. In 2018, the new installed capacity of CSP will reach explosive expansion and plenty  CSP plants under construction will become operational. 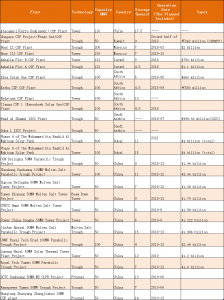 According to the data from CSPPLAZA research center, a total of 26 large CSP plants are currently under construction worldwide, with an aggregate capacity of about 3000 MW. They are mainly distributed among 8 countries: Chile(one/110MW), Kuwait(one/50MW), Morocco(two/350MW), China(13/750MW), South Africa(4/400MW), Israel (2/242MW) and United Arab Emirates(3/700MW)，Saudi Arabia(2/100MW) and will help the global new installed CSP capacity reach 1192MW within 2018.

The following is the summary of the key power stations under construction or in operation in global major CSP market made by CSPPLAZA.

In addition, significant progress has been made in the construction of the 100MW Ilanga CSP project, which is expected to be completed and put into operation within this year. The 100MW Redstone tower CSP project is also about to be built after twists and turns.

So far, Morocco has installed 380MW CSP capacity(NoorI & NoorII & Ain Beni Mathar).The total installed capacity will reach 530MW after the operation of 150MW NoorIII by the end of this year. Eventually, the total CSP capacity of Morocco will exceed 800MW with the bidding of the first and second phase of the Noor Midelt project progressing orderly.

Israel makes full use of its vast Negev Desert to plan the Ashalim Solar Complex Project with over 300MW total installed capacity, which includes two CSP projects (Ashalim1 and Ashalim2, both installed capacity at 121MW). The Ashalim1 tower CSP plant has entered a critical commissioning period and is expected to be officially put into operation in the near future. The Ashalim2 parabolic trough CSP plant now is developed by the Israeli Noy Infrastructure Energy Investment Company and the Spanish TSK Group due to the bankruptcy crisis of Abengoa and will soon be put into operation.

The 1390MW Waad Al Shamal ISCC Project, developed by the Saudi Electricity Company has entered operation stage in July, with a 50MW CSP plant incorporated, which is the first operational Integrated Solar Combined-Cyclevi plant and also the first commercialized CSP project in Saudi Arabia. In addition, the 50MW Duba1 ISCC project is also under construction and is expected to become operational within this year.

The United Arab Emirates becomes one of the most eye-catching CSP market with the world’s largest CSP project, Phase 4 of the Mohammed bin Rashid Al Maktoum Solar Park which absorbs Us $3.8 billion and whose EPC tender is granted to ACWA Power and Shanghai Electric Group Co Ltd . The project will enter comprehensive construction stage on August 1.

On July 11, Abengoa announced that the construction of CSP plant in Cerro Dominador Project, Latin America’s first power generation project combined CSP and PV plant, which is composed of 100MW PV plant and 110MW CSP plant resumed. The construction of the whole project is scheduled to be completed in the second half of 2019

In addition to China CSP market, in the projects under construction or under development around the world, the power station installed by Chinese enterprises as EPC has now reached 1.15GW (Dubai 700MW+ Morocco 350MW+ South Africa 100MW). China now is playing and will play an indispensable role in the development of global CSP development. China’s engineering service capability together with its strong CSP supply system is bound to enable China to make significant contribution on global CSP cost reduction.