‘The real story here is potentially revolutionary – CSP may now outcompete natural gas in many countries,’ says the energy economist Jonathan Walters, adding that the cheap thermal storage can even propel CSP technology to cover the baseload.

The possibility of cheap 24-hour solar power hitting Dubai means it may dominate the region’s power markets sooner than expected.

Dubai Electricity and Water Authority (Dewa) announced bids on Monday for its fourth phase of the Mohammed bin Rashid Al Maktoum solar park, a 200-megawatt concentrated solar power (CSP) plant. Not only did three of the four bids come in at record lows for this technology starting at 9.45 US cents per kilowatt hour, but the technology has the ability to store solar power for 15 hours. 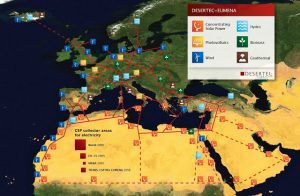 The current record for this technology is in Morocco at 15.67 cents per kWh with seven hours of storage. But the kicker is that the UAE does not even possess the best sun for CSP technology as the country contends with higher amounts of humidity, haze and dust.

Jonathan Walters, an energy economist and a former World Bank director, said that countries such as Egypt, Jordan, Morocco and Tunisia were likely to get even cheaper rates, based on their solar irradiation.

Unlike the solar photovoltaic (PV) panel technology in the Dewa park’s earlier phases, CSP relies more on direct sun beams hitting its curved mirrors to have a significant and economical output. For instance, Dubai’s available irradiation ranges from 1,856 to 2,029 a kilowatt hour per square metre a year, as opposed to the world’s current cheapest price for CSP at Morocco’s Noor 3 at 2,635 kWh per sq metre annually.

“The real story here is potentially revolutionary – CSP may now outcompete natural gas in many countries,” said Mr Walters, adding that the cheap thermal storage can even propel CSP technology to cover the baseload.

This means that solar, in the near to medium term, could economically power the electricity need to satisfy minimum demand, which is usually done by fossil fuels such as coal and natural gas.

“Let’s see which country takes advantage of this next,” Mr Walters said.

This tender marks a before and after for the CSP industry, said Belen Gallego, chief executive of Ata Insights, a Madrid-based consultancy. “The industry has been working on a series of incredible technology innovation. It has learnt from the past and is ready to take the challenge forward,” she said.

The Abu Dhabi-based International Renewable Energy Association issued a report in 2010 that said solar tower power plants, which will be built in Dubai, can have storage from six to 15 hours at a cost ranging from 17 to 29 cents per kWh.

Ms Gallego said that the short learning curve and deployment of CSP technology was remarkable. She said: “Whether what you need is 24/7 power or peakers (such as PV plants) for specific time slots, there will not be a more competitive renewable energy option in the Mena region.”