247Solar Inc., developer of the breakthrough 247Solar Plant™ that operates every hour of the year, today announced that it has entered into a definitive agreement to build its first full-scale system in Ouarzazate, Morocco, in collaboration with Masen, the Moroccan Agency for Sustainable Energy. Masen is responsible for managing renewable energy in Morocco, with a goal to secure 52% of the country’s energy mix from renewable sources by 2030.
The 247Solar Plant will be implemented jointly by Masen and 247Solar in order to contribute to the efficient use and industrialization of renewable energy in Morocco, by demonstrating for the first time 247Solar’s next-generation, 24/7 concentrated solar power (CSP) technology.
Masen and 247Solar will jointly evaluate the operation of the 247Solar Plant with a view toward deploying larger-scale installations in Morocco and elsewhere.
The 247Solar Plant will be deployed at Masen’s Noor Ouarzazate Solar Complex, the world’s largest multi-technology solar facility in operation (580 megawatts). Siting is approved and the Plant is expected to be operating in early 2020.
“247Solar Plants represent a turning point for CSP technology as a viable alternative for low-cost baseload solar power generation,” says Bruce N.
Anderson, CEO. “For the first time, we will be able to demonstrate our next generation 24/7 technologies in operation. We expect that a successful pilot will quickly lead to the adoption of our turnkey system in power projects of all sizes in Morocco and elsewhere
around the world.”
247Solar Plants are a turnkey solution for producing clean 24/7, baseload electricity at costs competitive with other baseload options. They eliminate most disadvantages of conventional CSP, PV, wind, and traditional power technologies with a hot-air-driven Brayton Cycle system that operates at atmospheric pressure and requires no steam, molten salts, or heat transfer oils. 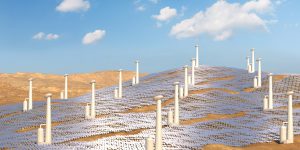 Unlike large, custom-engineered, first-generation CSP projects, 247Solar Plants are
standardized modules of 400 kW capacity, scalable from a single Plant off-grid to utility-scale farms of virtually unlimited capacity. 247Solar Plants use factory-made components, most of which can be manufactured locally, with few moving parts, for low maintenance and rapid, lowcost deployment.
The 247Solar Thermal Storage System™ stores up to 15 hours of the sun’s energy as heat instead of electricity, using simple firebrick or ceramic pellets instead of molten salts for reduced cost and complexity. To guarantee electricity on demand every hour of the year, the Plant’s turbines can also burn a variety of fuels.
247Solar Plants offer outstanding grid reliability and resilience with no requirement for
emergency backup. They provide battery-like response to grid voltage and demand
fluctuations, mitigating intermittency from other renewables.
The technology was developed by Wilson Solarpower Corp., a spinoff of the Massachusetts Institute of Technology (MIT), with initial funding from the US Department of Energy and development assistance from the German Aerospace Center (DLR), WorleyParsons, Fraunhofer Institute, and Saint Gobain.
247Solar, Inc. was formed in 2015 by solar industry pioneer Bruce Anderson to commercialize the 247Solar Plant™, invented by Wilson Solarpower Corp., a spinoff of MIT. The company has signed agreements to develop and deploy its technology in China and Sri Lanka, and is in advanced discussions with power project developers throughout the world, including Nigeria, Indonesia, Kuwait, Saudi Arabia, and elsewhere.
Masen was founded in 2010 and is a major player in Morocco’s overall energy strategy. The Company oversees implementation of the country’s renewable energy program aiming to achieve 52 per cent of the national electricity mix from renewable sources, by 2030.
As manager of all integrated renewable energy project aspects ranging from generating
electricity to contributing to the local economy and communities, Masen is transforming natural energy into power for progress.

247Solar Inc., a US company (http://www.247solar.com), is building its first commercial demonstration 247Solar Plant™ in Ouarzazate, Morocco.
It is doing so in partnership with the Moroccan Agency for Sustainable Energy (MASEN) http://www.masen.ma/en/ (a global leader in the commercialization of solar energy.
The Commercial Demonstrator will be deployed at MASEN’s Ouarzazate (Noor) Solar Complex, the largest and best known concentrated solar power (CSP) project in the world.
The Commercial Demonstration 247Solar Plant™ will be used to provide incontrovertible, documentable, and independently verifiable evidence as to the performance of the technology so that customers and financiers can be confident that it will perform to the designated specification.
Data from the Commercial Demonstrator will be compared with economic modelling, which will be continually updated to ensure accurate, predictable models for the future.

The Commercial Demonstrator of 400 kWe is an exact model of the standardized, pre-engineered 247Solar Plant module that will be replicated on customers’ sites as many times as necessary to achieve the required power output.
In addition, the Commercial Demonstrator ‘s performance will be monitored against similar rival technologies, many of which are available on site, to provide accurate cost benefit analysis of the various technologies.
247Solar have appointed UK-based Rost International Trading to assist them in developing their business.
Founded in 2014 by partners Stuart Whitelock and Paul Foster, Rost operates in the Renewable Energy, Energy, and Water industries, together with their Associate
Partners: Rod Lancaster (Dubai), in charge of Renewables and Logistics; Andy Birtles , in charge of Mining and heavy industry applications; and Harjeet Heer, Head of Finance and Finance Planning.

The commercial demonstration project will be a single, standardized 400 kWe system overseen by a team of international Concentrated Solar Power and turbomachinery experts.
1. About 4 acres (<2 hectares, 16,000m2) of heliostats (pole-mounted, solar mirrors from a third- party vendor) totaling 4000 sq m that track the sun and focus ~1500 suns of energy onto…
2. …an innovative high-temperature, air-heating 247Solar Receiver™, where air is heated at near atmospheric pressure to 970oC. The Receiver is mounted on…
3. …a common, off-the-shelf truss tower ~35m tall, which holds the ducting that carries the air to and from the Receiver. Toward the bottom of the tower, some of the hot air goes to…
4. …an off-the-shelf, 400 kWe “microturbine” package that is shipped operation-ready with generator and power electronics for quick grid connection and very high reliability.
Microturbines use compressed hot air rather than steam, require just 4-6 hr/yr of maintenance, and have overhaul schedules of 50,000 hours. The package also includes the 247Solar Heat Exchanger™, which transfers the solar heat from the low-pressure air to the compressed air from the turbine’s compressor.
5. The rest of the low-pressure hot air from the solar receiver goes to a ~10-hour 247Solar Thermal Storage System™, which powers the turbine when the sun is not shining. The 247Solar Plant’s hot air heats “dry” storage such as firebrick or small pieces of ceramic rather than molten salts typical of other CSP systems. If desired, the turbine burns conventional fuels or biofuels (liquid or gaseous) when the thermal storage system is depleted.