Twenty years from now, utilities may depend on fields of mirrors in the desert to produce 24-hour solar power. Concentrating solar power (CSP) technology collects the sun’s energy as heat, which can then be stored and called upon to produce power when needed—even when the sun isn’t shining.

The Crescent Dunes power plant in the Mojave Desert is a blueprint for high-tech CSP systems across the world and was originally developed with U.S. Department of Energy (DOE) funding in the 1990s, reports the U.S. Department of Energy. The plant uses molten salt as a heat transfer fluid and storage medium, which allows it to be incredibly efficient and cost-effective to build. 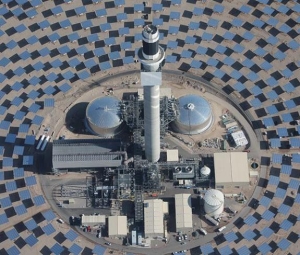 Several SunShot projects are underway to improve power cycles to make them more efficient. Southwest Research Institute (SwRI) is partnering with General Electric on two projects that test new turbomachinery designs. The first develops the expander for a sCO2 cycle and the other focuses on the compressor, which pressurizes the sCO2 fluid and increases the temperature. SwRI is also working with Hanwha Techwin to reduce manufacturing costs and improve efficiencies in a compressor-expander design to make CSP technology more commercially viable.

Some plants use molten salt to collect heat and store it in tanks for later use. The hotter these salts get, the more energy they can produce, resulting in electricity at lower prices. However, when salt reaches very high temperatures, it can become corrosive causing equipment damage at a CSP plant. Researchers at the University of Arizona are working to develop a salt mixture that reduces the amount of corrosion in storage tanks while still reaching temperatures higher than 800°C. Savannah River National Laboratory also successfully developed corrosion mitigation strategies that make CSP systems last longer by using magnesium and zirconium. These developments will continue to make molten salts a viable option for energy storage.

Instead of using molten salts, researchers at Sandia National Laboratories are testing a cascade of particles called proppants in a solar receiver. Proppants are made from iron oxide and silica, a material similar to sand, and can potentially reach temperatures as high as 1,200°C. So far, researches have been able to reach 840°C and expect to make even more progress as testing continues. This invention won a 2016 R&D 100 Award for being one of the year’s top innovations. The video above shows how proppants are tested in the falling particle receiver and their potential to lower the cost of solar energy.

A receiver’s solar-selective coatings control which wavelengths of sunlight are absorbed from the mirrors. Researchers are developing new coatings that will significantly improve power plant efficiency by reducing the amount of light that is reflected away from a plant. This allows the receiver to operate at high temperatures and leads to more electricity generation. Dartmouth College is developing a ceramic coating with long-term anti-oxidation protection that reduces the likelihood of damage to the receiver and achieves a thermal efficiency of higher than 90 percent. Argonne National Laboratory is also developing coatings that can withstand operating temperatures of 800°C, while maintaining high absorptivity for visible light and low emissivity for infrared light. The lab is using several techniques to ensure that selectivity will last much longer as parts of the coating degrade over time.

CSP is most popular in the desert southwest where sunlight is abundant, but so is dust. Frequent washing of mirrors used in CSP plants ensures they are effective. New technology is under development to reduce the need for washing, saving water in the process. Boston University is working on a transparent electrodynamic screen technology that is activated by voltage pulses, charting the dust particles on the surface of the film and removing them by an electrodynamic traveling wave motion. Oak Ridge National Laboratory is also developing a spray-on coating for mirrors, as well as an automated process to apply the spray, which aims to cut dust accumulation in half and greatly reduce the need for washing.