Although no CSP projects were finished in 2012 in the U.S., at least three large projects are under construction and slated for completion in 2013.

BrightSource’s Ivanpah project "will be turning on in a few weeks," commented Nancy Pfund, an investor at DBL Ventures, during the Renewable Energy Finance Forum in San Francisco earlier this week. (Dana Hull of The Mercury News learned that BrightSource is "currently in the commissioning phase and…will soon achieve first synch to the grid for one of the towers — that is the first time steam is sent to the turbine and the turbine is subsequently synched to the grid. First synch is a critical milestone for any steam-generating power plant before it is placed into full operation.

[…] Ivanpah is on schedule to deliver electricity by the end of 2013.")
BSE raised a $35 million bridge round from investors in July and lost CEO John Woolard in June.

GTM Research’s database tracks the progress of all planned CSP projects in the U.S. — a pipeline which contains over 1,692 MWac of CSP projects with signed PPAs, as well as another 812 MWac of projects under development that have not yet signed PPAs with utilities.

This brings us to eSolar, the Burbank, Calif.-based builder of power-tower solar thermal technology. That firm just raised $22 million led by Oak Investment Partners. Existing investors include Idealab, GE Energy and Google.org. GE purchased a stake in the startup in 2011. The company has raised close to $200 million since its founding in 2007.

Bandel Carano of Oak Investment Partners is quoted on the website CSP Today as saying, "Demand for solar thermal technology in the oil industry is surging, and eSolar’s dispatchable power block is an ideal solution for enhanced oil recovery in these remote environments."

eSolar is now pursuing enhanced oil recovery applications, rather than power generation in the U.S.

Earlier reporting by GTM on eSolar:

“What is so unique about our technology is the modular nature of it and the scalability,” explained eSolar President/CEO John Van Scoter. “Instead of one-size-fits-all,” he said, “we can literally build these up just like building blocks and adapt to different customer requirements.”

The company has just completed phase two of a $50 million move, in partnership with the U.S. Department of Energy (DOE) and Babcock & Wilcox, to molten salt storage. “That will dramatically reduce the LCOE [levelized cost of electricity] delivered to the grid compared to steam-only non-storage systems,” Van Scoter said. “We chose to move the roadmap in that direction back in 2010 in order to be competitive,” he added.

The LCOE reduction is, Van Scoter acknowledged, to compete with PV. ESolar’s roadmap, he said, shows industry LCOE predictions for both crystalline silicon and thin-film PV. “Our objective is to compete straight-up with the best-in-class PVs on an ongoing basis but have the advantage of being dispatchable with storage.” 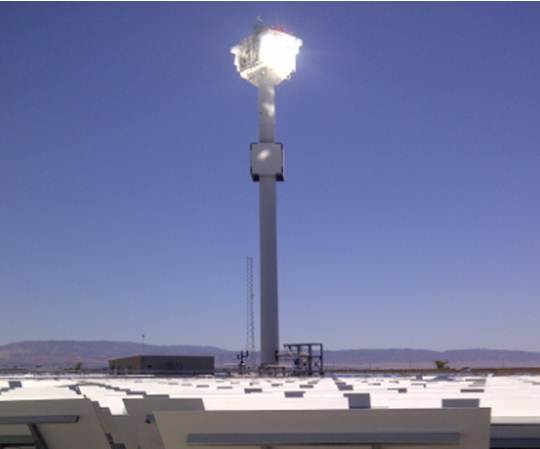