A breath of fresh air for concentrated solar power

A breath of fresh air for concentrated solar power

By directing sunlight from a large surface towards a much smaller one, concentrated solar power (CSP) plants can produce temperatures of more than 1000°C. Better heat transfer fluids are needed to capture this bounty. EU-funded researchers have developed a solution involving ceramic particles suspended in air. 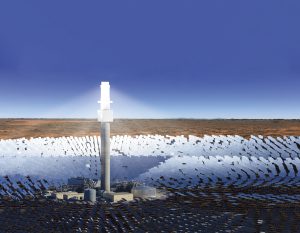 The CSP2 project developed an innovative solution to overcome the limitations of current heat transfer fluids. Its solution involves a combination of particles and gas, instead of the liquids that are typically used.

Using the proposed approach, temperatures of 700 to 750 °C could be sustained, whereas current heat transfer fluids are limited to 550 °C at best, says project coordinator Gilles Flamant of France’s National Centre for Scientific Research.The partners tested the proposed approach in a demonstrator whose performance confirmed the potential of their solution, he reports.

“In a concentrated solar thermal power plant, solar energy is concentrated on a receiver by means of mirrors. The resulting heat is then converted into electricity by a turbine. Heat transfer fluid is used to transport the collected energy from the receiver to the converter,” says Flamant.

The solution proposed by CSP2 would boost conversion efficiency to well over 50 %, Flamant reports. It would also eliminate a constraint of the molten salts that are widely used as heat transfer fluids: in contrast to these substances, the gas-suspended particles wouldn’t solidify at temperatures below 200 °C or so, obviating the need to keep the fluid warm.

The system carries no particular risk to the environment, Flamant notes; it is stable and affordable, and it can be controlled with great precision. It also supports one of the advantages that set CSP aside from various other technologies exploiting renewables: energy in the form of heat can be stored prior to conversion into electricity, which can thus be produced flexibly when it is needed.

For heat storage, Flamant explains, the gas would be extracted from the blend, leaving a packed layer of hot solids, and subsequently reinjected to create a flow of particles towards a heat exchanger. Various combinations of substances would be suitable, he adds, but CSP2 opted for silicon carbide particles suspended in air.

The heat is on

CSP2 ended in November 2015, and a follow-on project named Next-CSP, also led by Flamant, has set out to take the technology another step ahead. The aim of this new EU-funded project, Flamant explains, is to build an actual industrial pilot, which is to include a scaled-up version of CSP2’s receiver technology (x20), along with a complete heat transfer and storage system, and a gas turbine.

It’s quite a challenge, he says, particularly as there is plenty of competition. “We are not the only ones working on particle-based heat transfer technology. But worldwide, we are the largest project in this field,” he adds, and the system the partners are proposing is well advanced.

Their joint achievements build not just on technical know-how and funding, Flamant notes. “For this kind of project to be successful, you need very strong, very efficient collaboration between the partners,” he concludes. “Without it, you wouldn’t get such results. You cannot make it on your own.”