When you think of solar energy, you probably picture the photovoltaic panels that capture sunlight to be converted to electricity. But there are other ways to harness the sun’s power. One method attracting growing interest is called concentrated solar-thermal power, or CSP, which uses mirrors to reflect and concentrate the sun’s energy. 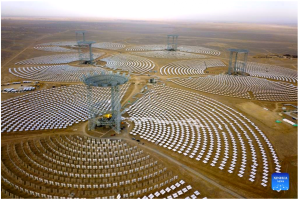 CSP has been held back by technical challenges and a shortage of funding and government incentives compared with other sources of renewable energy. But as the sense of urgency about replacing fossil fuels continues to grow, spurring demand for carbon-free energy, a number of increasingly well-funded entities are trying to improve the technology. Proponents say the heat that CSP systems produce and their storage capacity offer advantages over other renewables for generating grid-scale electricity and fueling various industrial processes.

So, how does it work? Rather than convert sunlight directly into electricity, as photovoltaic panels do, CSP uses mirrors called heliostats to focus sunlight on receivers filled with one of several possible liquid or solid materials. The sunlight heats the material to extremely high temperatures, creating thermal energy.

Another Way to Catch Rays

Concentrated solar-thermal power harnesses the sun’s energy without photovoltaic panels, using mirrors to concentrate the sun’s rays and capturing their heat to create electricity. How one system works:

The sun’s rays shining on the mirror trough system are reflected from all angles onto a linear pipe containing a fluid (sometimes molten salt or oil).

The fluid inside the pipe heats up from the concentrated rays of the sun. This fluid is then pumped to a heat exchanger that transfers the fluid’s heat to water, which creates steam.

Steam turns a turbine in a generator that creates electricity. This can amount to 250 megawatts or more of power, enough to run 90,000 homes. The steam is then cooled and condensed, the water stored and reused.

Heated fluid can also be stored and used later to make electricity on demand, such as when the sun isn’t shining. 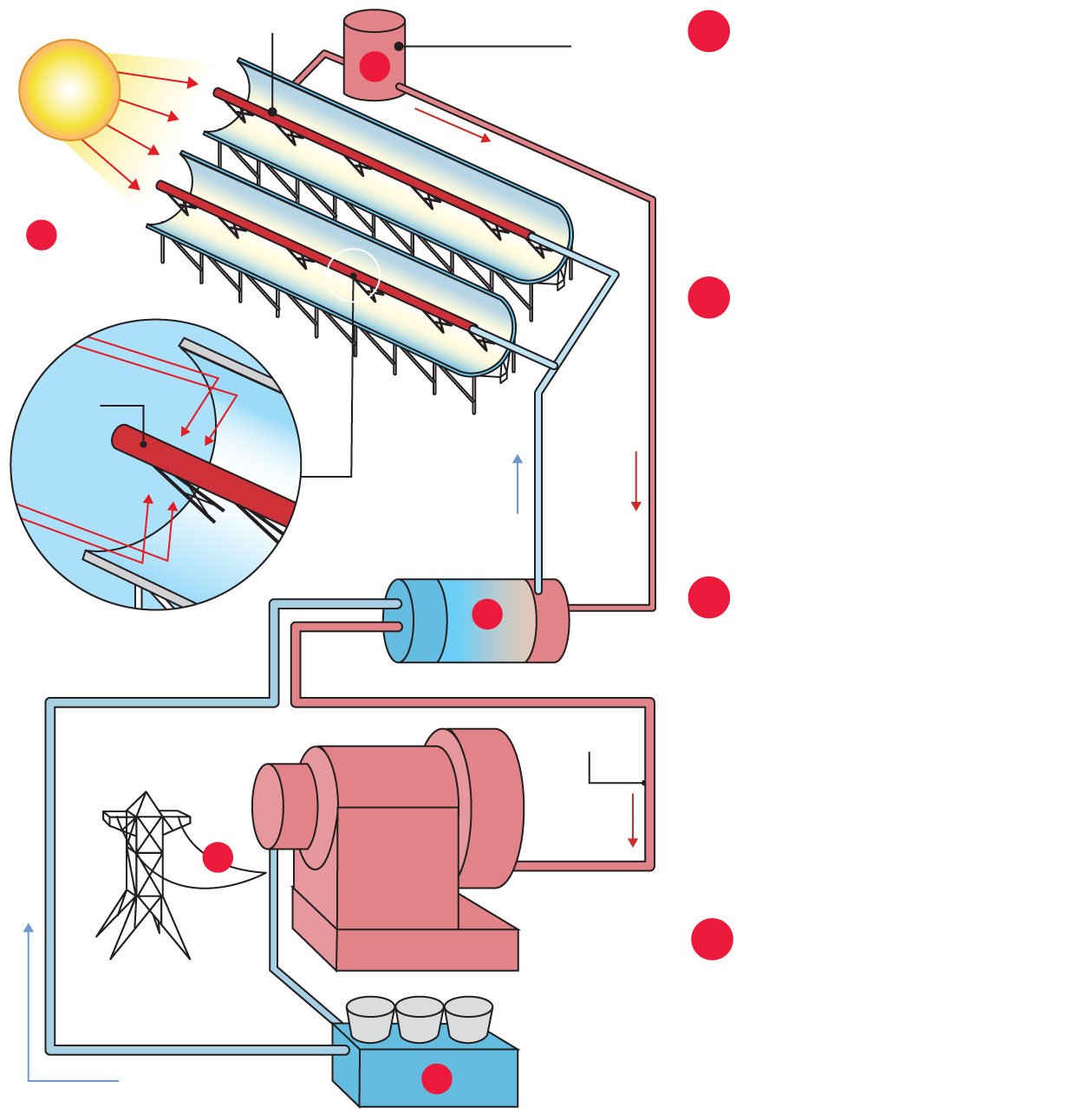 Cool water returns for reuse  The sun’s rays shining on the mirror trough system are reflected from all angles onto a linear pipe containing a fluid (sometimes molten salt or oil).

The fluid inside the pipe heats up from the concentrated rays of the sun. This fluid is then pumped to a heat exchanger that transfers the fluid’s heat to water, which creates steam.

Steam turns a turbine in a generator that creates electricity. This can amount to 250 megawatts or more of power, enough to run 90,000 homes. The steam is then cooled and condensed, the water stored and reused.

The superheated material can be used to produce steam that can generate electricity by spinning a turbine or powering an engine. The advantage of CSP for this use is that most CSP systems can store enough heat to produce six to 12 hours of power on demand for later use, compared with three or four hours for the lithium batteries that store energy generated by photovoltaic systems.

CSP also can be used in a variety of industrial processes that require intense heat, such as steelmaking, concrete making and chemical production. Using the heat from CSP this way is more efficient than taking electricity from solar panels and converting it to heat, and cleaner than burning fossil fuels to produce heat.

Companies are increasingly exploring CSP as a way to reduce emissions, says

a senior researcher in the Concentrating Solar Power and Geothermal Technology programs at the federally funded National Renewable Energy Laboratory. The environmental impact could be significant. “Industry heat represents 20% or 25% of total energy consumption” of all kinds, Dr. Zhu says.

CSP won’t ultimately replace photovoltaic solar energy, Dr. Zhu says, but instead will supplement it. “If we are trying to decarbonize the grid with 100% renewable energy,” he says, “then we need everything.”

A long way to go

For now, CSP’s contribution to the global energy supply is minimal. The world has about six gigawatts of CSP capacity, with a little over two gigawatts of that in the U.S., according to

a principal research analyst in the energy transition practice at Wood Mackenzie, an energy research and consulting firm. By comparison, photovoltaic solar power recently exceeded one terawatt, or 1,000 gigawatts, of capacity.

Technical challenges are partly responsible for that disparity. Among them: Converting heat to electricity is expensive and less efficient than the photovoltaic process. And CSP systems need a lot of water—a problem because they are best located in deserts or other water-scarce areas to maximize exposure to sunlight. Mr. Attia says newer technology that could drive costs down and make CSP more efficient holds promise, but there hasn’t been a breakthrough. “We haven’t really seen any commissioned next-generation CSP technology in the field,” he says.

A new stream of investment and research could start to change that. Research initiatives include HelioCon, a consortium of corporate and government entities, researchers and CSP experts formed In December by the National Renewable Energy Laboratory and the Energy Department to develop cheaper, more-efficient heliostats.

At the same time, researchers at the University of Barcelona are working on pinpointing a material that can be heated to a higher temperature, which is more effective at producing electricity. It’s also essential to find a material that isn’t rare, expensive or toxic, says Ana Ines Fernandez,

a professor in the department of materials science and physical chemistry at the University of Barcelona. This could help CSP avoid the problem that lithium batteries have: The batteries rely on rare-earth metals that are in high demand and have serious labor issues around their sourcing.

“We want to look for not only the cheapest but also the most sustainable solutions,” Dr. Fernandez says.

Several projects are exploring uses for CSP beyond electricity generation. Synhelion SA, a company spun off from the Swiss Institute of Technology, wants to use CSP to produce carbon-neutral kerosene for jet fuel.

Carbon-neutral kerosene is made by splitting water into hydrogen and oxygen and then combining the hydrogen with carbon dioxide. Synhelion plans to use heat from CSP for the energy needed to produce the fuel, and aims to make 700,000 tons of carbon-neutral kerosene a year by 2030, which would be the equivalent of about half of Switzerland’s jet-fuel consumption, says Philipp Furler, the company’s chief executive and founder.

CSP has advantages for this process. It’s more efficient than using electricity to produce heat. Also, a CSP system requires less land than a photovoltaic system to produce the same amount of energy. And CSP’s storage capacity means it can provide an uninterrupted power supply.

Another company, Hyperlight Energy, plans to test the use of CSP to reduce the carbon footprint of oil drilling. In some oil wells, natural gas is burned to create steam that is pumped into the ground to help force the oil toward the surface. Hyperlight plans to build a pilot CSP plant near an oil well to serve two purposes: The heat produced by the plant can be fed underground to help push oil to the surface, and that heat is effectively stored below the surface, where it can be tapped for electricity generation.

Heliogen Inc., HLGN -7.54% a CSP company backed by Bill Gates, uses computer vision to track the sun and continually adjust the mirrors in a CSP plant to maximize the concentration of sunlight. That takes some of the complexity out of building a CSP system, which lowers construction costs. In current systems, mirrors have to be painstakingly installed in the best possible position. Even then, the ground can shift and stop concentrating the sunlight as effectively, according to Bill Gross,

“Without AI, this wouldn’t work,” Mr. Gross says. “Computer vision is the breakthrough that makes this possible.”

The company is also taking a page out of the solar-panel playbook and making the mirrors in one standard size. Previously the mirrors for CSP plants were all designed and built specifically for each installation. “Mass manufacturing can drive costs down,” Mr. Gross says.

Like Dr. Zhu, Mr. Gross sees CSP as an additional renewable-energy tool, not a replacement for photovoltaic solar energy. “’There are places that PV will win—we are never going to be on your rooftop,” he says. “Where CSP wins is in decarbonizing industry.”

Ms. Snow is a writer in Los Angeles. She can be reached at reports@wsj.com.