Researchers at national labs and companies are exploring ways to make concentrated solar power more efficient and affordable, all of which require turning up the heat.

A 200-foot tower stands centered in front of a field of rotating mirrors on the southern edge of Albuquerque, New Mexico.

The hundreds of mirrors focus sunlight onto a receiver at the top of the solar tower. In conventional systems, this would heat water or other fluids to generate steam that drives an electric turbine. But here a curtain of fine ceramic particles continually falls through the concentrated sunbeam instead. The particles, which resemble black sand, can easily reach temperatures 100 ˚C hotter than those standard fluids. That promises to boost the available energy, cutting the costs of production and storage.

This approach is one of three that federal researchers believe could help concentrating solar power finally become affordable and sustainable. Last January, the National Renewable Energy Laboratory published a next-generation demonstration road map that highlighted falling particles, higher-temperature molten-salt systems, and a gas-based heat transfer fluid as promising pathways to produce solar thermal energy at six cents per kilowatt-hour by 2020, a goal set by the Department of Energy’s SunShot Initiative in 2011.

The Department of Energy announced in September that it would invest $62 million in about a dozen promising projects along these pathways, sparking renewed excitement in a field that had largely faded from the public view (see “Making Sense of Trump’s Surprising Investment in Solar”).

Researchers at Sandia, the National Renewable Energy Laboratory, Savannah River National Laboratory, and Brayton Energy have confirmed to MIT Technology Review that they’ve applied for the funds, individually or as teams. Concept papers were due earlier this month, and the deadline for full applications is mid-January 2018. 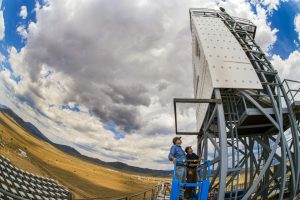 “Everyone in CSP is looking at this as a great research opportunity,” says Cliff Ho, a Sandia engineer and principal investigator of the falling-particles project.

The big advantage of concentrating solar over photovoltaics is that heat energy can be stored more easily and affordably than electricity. That means the plants can ramp production up or down to meet the real-time demands of the grid, even at night, a flexibility that solar panels can’t match without big, expensive batteries or other restricted forms of storage.

The problem is that building and operating a concentrated solar power plant is expensive. The $2.2 billion, 170,000-mirror Ivanpah plant in California’s Mojave Desert, owned by BrightSource, NRG, and Google, is just the latest black eye for the sector. Since coming online in 2014, the project has been plagued by high costs, low production, a fire, and utility commission threats to shut it down. In the 1980s, Luz International erected nine earlier-generation concentrated solar plants in the same desert, only to see those high-cost operations collapse as supportive government policies expired. Luz and BrightSource were both founded by Arnold Goldman, who died in June (see “Chasing the Sun”).

Lazard’s Levelized Cost of Energy Analysis found last December that energy production from a solar thermal tower with storage ran between $119 and $182 per megawatt-hour, compared with $48 to $78 for combined-cycle natural gas. The latter also cost about one-eighth as much to build on a kilowatt basis, according to 2015 figures from NREL.

DOE researchers previously determined that the first step toward improving the efficiency and economics of concentrating solar power is moving from traditional steam-power cycles to what’s known as a supercritical carbon dioxide Brayton cycle. By placing carbon dioxide under high heat and pressure, it takes on the properties of both a liquid and a gas, and significantly increases the energy conversion efficiency.

A Science paper in May concluded that a supercritical carbon dioxide Brayton cycle could be up to 30 percent more efficient than conventional steam turbines. The problem, however, is that running this power cycle requires a heat source of at least 700 ˚C to realize its full potential, as well as a heat transfer system that can operate under such high temperatures.

All three of NREL’s highlighted pathways are efforts to crank up the temperature, though each has its own set of promises and challenges. Molten salt, for instance, has already been done, but moving to alternative salts capable of working at higher temperatures will require more durable containment materials, pipes, and pumps. The gas approach could be pursued with relatively easy-to-manage gases like carbon dioxide or helium, but additional research will be needed to minimize the power drain from circulating the gases.

The falling-particle receiver at Sandia is the closest thing to a working prototype along any of these paths. Engineers first placed it on the tower at the National Solar Thermal Testing Facility in July 2015.

The particles are made primarily of alumina and iron oxide. After falling through the solar beam, they ride back to the top on an elevator, in a loop. The team has achieved temperatures as high as 900 ˚C, Sandia engineer Ho says.

At this stage, the receiver isn’t attached to any additional components. But the team has been working in partnership with private contractors to develop a heat exchanger that will eventually transfer the heat from the particles to pressurized carbon dioxide flowing through a connected loop.

A separate group at Sandia has already been developing and evaluating supercritical carbon dioxide cycles. Ho’s team has begun working on its own system specifically for the concentrating solar power facility. They intend to connect the heat exchanger once it arrives in March and the supercritical carbon dioxide loop shortly thereafter. Ho says he hopes to turn on the integrated system next summer.