Aalborg CSP, leading developer and supplier of innovative renewable systems and technologies has begun construction of the world’s first Integrated Energy System based on Concentrated Solar Power (CSP) to holistically satisfy multiple energy needs of Sundrop Farms’ greenhouses in the South Australian desert. In the first phase, a 51,500m² solar field consisting of more than 23,000 heliostats will be installed.

The Integrated Energy System is the first large-scale CSP-based technology in the world to provide multiple energy streams (heating, fresh water and electricity) for horticultural activities.

The groundbreaking concept to grow high-value crops using seawater and sunlight as main resources originates from Sundrop Farms, which began testing its integrated system at a small scale in 2010. The company’s positive operational experience from its pilot plant encouraged the large-scale application of the technology, expanding operations to 200,000m2 with the aim to produce over 15,000 tons of fresh vegetables annually for Australian consumers.

As turnkey supplier of the solar plant and the power-block, Aalborg CSP has recently begun construction of a unique Integrated Energy System to holistically satisfy the new Sundrop Farms greenhouses’ different energy needs at the lowest possible cost throughout the year. The state-of-the-art system is based on CSP tower technology and it will be capable of heating the greenhouse in wintertime and on cold summer nights, to provide fresh water by desalinating seawater drawn from the nearby Spencer Gulf, and to periodically run a steam turbine to produce electricity.

The Integrated Energy System will stretch over 140,000m2. As a first phase of the construction, Aalborg CSP has commenced installation of the solar field with the aim to set up more than 23,000 heliostats (computer-controlled mirrors) delivered by California-based company eSolar. Within a few months, the heliostats will occupy 51,500m2 of the total area. The heliostats will collect the sun’s rays and reflect them onto the top of a 116m high solar tower. The collected solar energy will be converted to steam which will then be used for multiple purposes, including seawater desalination, heating and electricity production.

“The Integrated Energy System is the first of its kind in the world and it changes the way we are thinking about energy today. It is an intelligent way to supply different energy outputs at the time the industrial facility would need it while providing significant cost and CO2 savings as well” – says Svante Bundgaard, CEO of Aalborg CSP.

Once commissioned in the second half of 2016, the Integrated Energy System will prove a new platform to address major global energy challenges. Besides offering a cost-competitive alternative to conventional energy technologies, the system will contribute to a greener future as it avoids the emission of at least 14,700 tons of CO2 annually. This is equivalent to 2,807 cars removed from the roads in a year. 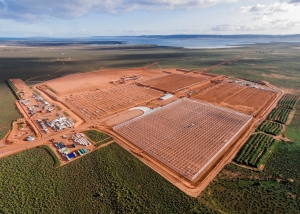 Aalborg CSP is leading developer and supplier of innovative renewable technologies with the definite purpose to change the way we produce energy today. Relying on extensive experience from some of the most efficient concentrated solar power (CSP) projects around the world, the company designs and delivers green technologies and integrated energy systems to lower cost of energy for industries and power plants worldwide.

Aalborg CSP places strong focus on R&D activities and partners with knowledge-based companies and institutions to create leading-edge technologies. As a result, the Aalborg CSP engineering design is centred on a value-adding concept providing solutions that excel in operation, increase plant revenue and contribute to a greener future.

Headquartered in Aalborg (Denmark) and with sales & service offices in Spain, the US, Kenya, Uganda, Australia and Indonesia, Aalborg CSP has realised cost effective green energy solutions to a variety of industries worldwide.