Engineers at Aalborg CSP have developed, designed and optimized an asymmetric solar receiver to pair with a new heliostat from the Spanish firm Tewer Engineering as part of the PHOTON project, which aims to reap more competitive configurations and simplify assembly and commissioning operations for Concentrated Solar Power tower plants with external molten salt receivers. 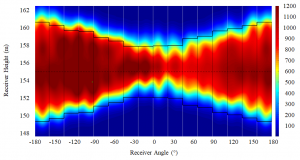 An asymmetrical receiver is a new idea.   Currently, the external receiver in tower CSP using molten salts as the heat transfer fluid is a cylindrical shape, with all of the small pipes making up the cylinder – about 20 meters high – the same length all around.

But a solar field does not send the same amount of solar flux all around a tower. There is more solar energy coming from one side, depending on whether the plant is located in the Northern or Southern hemisphere. Tewer shared with Aalborg CSP flux maps showing the daily and seasonal variation for a Southern Hemisphere case. 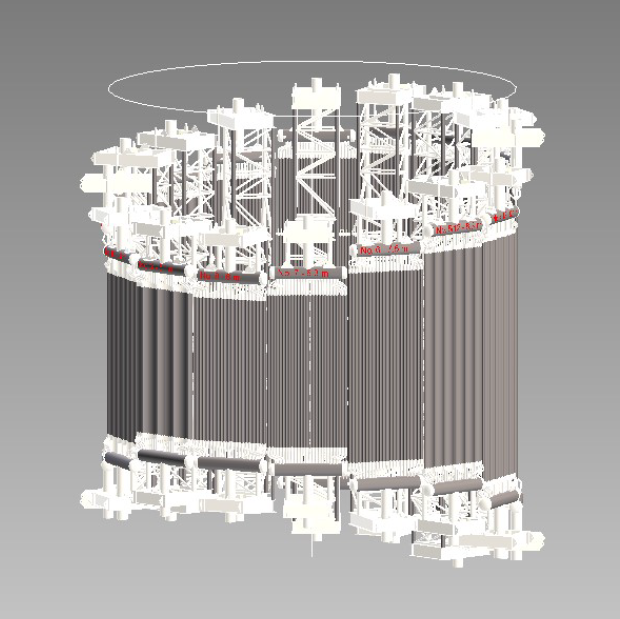 As a key speaker at the SolarPACES Conference in South Korea, Thermal Energy and Process Engineer Stephanie Sigvert Sørensen of Aalborg CSP presented their study; Optimization of Asymmetric Solar Receiver Design in High-Performance Thermosolar Plant in Synergy with PV-Hybrid Autonomous Heliostats. (The PV refers to a laptop-size PV and battery unit built-in to each heliostat to power its movement.)

“The innovation built on the idea that with asymmetric flux levels from the solar field; why not make the receiver also asymmetric to fit better with that incoming flux,” she explained.

They came up with what they call field-receiver optimization, or integration. When they received the results from the solar field, they found that it would make sense to have  some longer panels and others shorter. Sørensen explained that by cutting off a few of the panel sections from the top and bottom of the receiver, you can narrow down the heat transfer area to hit mainly the high flux density area in the middle section, and cut off areas with low flux density – under around 100 kW per square meter.

“We were cutting off what we found was spillage anyway, so why not just ignore it,” she said.

“The advantage is cost reduction: you need less material. We thought it was a very good idea. It was something that we needed to test, since the idea seemed to be a new one and quite interesting, and there appears to be promising results.”

Their design was developed as part of a collaboration under Europe’s PHOTON project which received financial support from the Eurostars program and funding from Innovation Fund Denmark.

As well as collaborating with Tewer on the solar field/receiver relationship, there were three other project partners aiming to increase production/cost ratio and overall plant efficiency; PROTECH on the wireless communication, Metsolar for the sensor, and Acciona for the power block.

Aalborg CSP has aa great deal of commercial experience in complete systems (for one example in the innovative Sundrop Farms seawater greenhouse project in Australia)  and also assisted Acciona with the steam generation system. 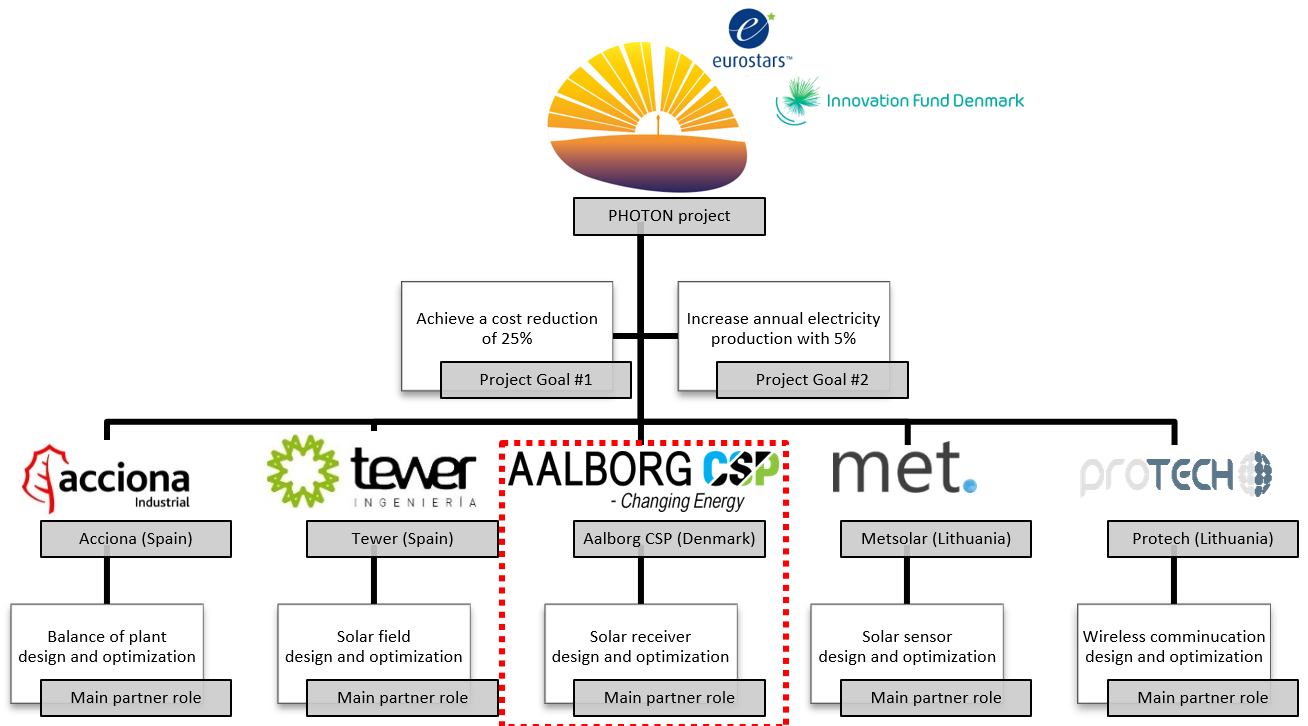 The goal of the overall project by all five partners was to achieve a cost reduction of 25% and increase the annual electricity production by 5% or equivalently increase the plant’s global efficiency.

Aalborg CSP’s part in the project concerned the development, design, and optimization of the receiver (patent pending #EP1938236 “Asymmetric Solar Receiver”) designed to pair with the TEWER heliostat.

“The concept is a field-receiver integration. TEWER came up with the idea of doing their own optimization and aiming strategy investigations. They proposed to us an asymmetrical solar field and this gave us the opportunity to put asymmetry into the receiver as well,” said Sørensen  .

Like many projects, the PHOTON project was put on hold due to the coronavirus, so there was a wait to do final heliostat tests.

“TEWER’s heliostat prototype has already been tested in Madrid in initial tests, that are still up and running, and they are planning to test further at PSA once they reopen,” she said. 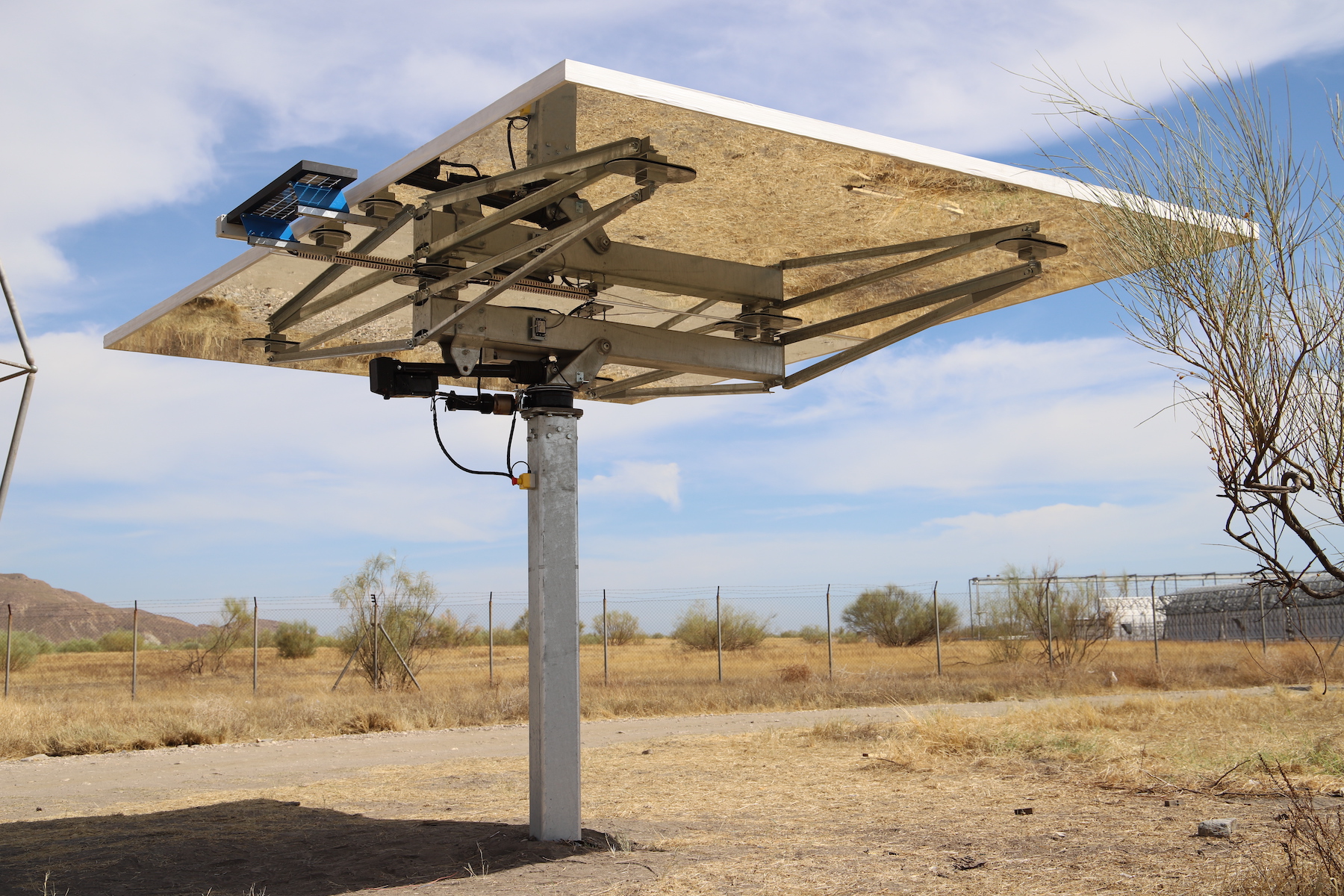 But the actual receiver modification is only a matter of some shorter pipe lengths, so there is no need to test that, according to co-author and project manager at Aalborg CSP, Mechanical Engineer Jens Jørgen Falsig. The actual technology for making a receiver would not change.

“We are optimizing only the pipe lengths, so we are confident that it will work,” he explained. “Individual panels within the receiver have different lengths. Instead of each panel having all 20 meter long pipes, some of them maybe only have 14 meter-long pipes. So it is not difficult to manufacture.”

Molten salt receiver efficiency in an optimized asymmetric receiver would be increased by about 1% in both plant sizes compared to optimized but symmetric base cases.

The greatest cost reduction in the asymmetric receiver was in materials. Overall receiver costs, in steel support, insulation, tracing and so on would be significantly lower and more pronounced in a smaller tower plant, with its smaller solar field, which has a higher optical quality. These overall receiver costs were reduced by over 13% in the 100 MW case, but were reduced by more than 20% in the 50 MW case.