Abengoa announces results for the first nine months of 2015

Abengoa announces results for the first nine months of 2015

Abengoa (MCE: ABG.B/P SM /NASDAQ: ABGB), the international company that applies innovative technology solutions for sustainability in the energy and environment sectors, recorded revenues of €4,873 million for the nine months of 2015, EBITDA of €891 million, while pro-forma net income reached €4 million for the first nine months of 2015. Pro-forma net income excludes the accounting impact (net of tax) from the mark-to-market of Abengoa’s investment in Abengoa Yield of €198 million (based on a price of $16,55 per share as of Sep. 30, 2015). This constitutes the application of an accounting convention that does not affect the operating activity or the cash flow. 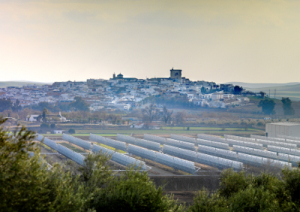 Abengoa’s geographic diversification continues to be one of the key factors behind its growth and strategy. South America and North America, representing 35% and 29%, respectively, of the nine months revenues, continue to represent the key regions for Abengoa. The remaining geographies remain stable with Spain representing 14%, Rest of Europe 11%, Africa 8% and Middle East & Asia 3%.

“Within a very complex financial backdrop Abengoa business performance YTD shows strengths of relevance; the Company maintains a record high E&C backlog at €8.8 billion, coupled with a strong performance in the Americas (representing 64% of revenues). Our reinforced plan, which includes the framework agreement with Gonvarri, marks a path towards a sustainable situation for the future” commented Santiago Seage, CEO of Abengoa.

On September 23, 2015, Abengoa’s Board of Directors approved a package of strategic measures, which, among others, include measures to improve the liquidity position of Abengoa and strengthen its corporate governance. The main elements to be implemented under this plan include the reinforcement of the previous asset disposal program, a capital increase by means of a Rights Issue approved on October 10, 2015 at the Extraordinary General Shareholders’ Meeting and other corporate governance measures.

Abengoa has identified and implemented its action plan in order to strengthen the balance sheet and restore market confidence.

On November 8, 2015, Abengoa announced that the Company had entered into a framework agreement for the investment in Abengoa by Gonvarri Corporación Financiera (“Gonvarri”), a company belonging to Gonvarri Steel Industries, within the context of the Rights Issue approved at and EGM on October 10th, 2015. A portion of Gonvarri’s investment, amounting to €250 million, will be carried out through a capital increase without pre-emptive subscription rights by means of the issuance of class A and B shares of Abengoa. Additionally, Gonvarri is expected to subscribe for its relevant portion of the shares in the €400 million Rights Issue with pre-emptive subscription rights.

Gonvarri is expected to have 28% of voting rights upon completion of the Rights Issue, thereby becoming the main shareholder of Abengoa. Of the 13 seats on the Board of Directors of Abengoa, the new shareholder will have four seats, replacing representatives of the current controlling shareholder (Inversión Corporativa, IC, S.A.) which, once the transaction is completed, will have one representative on the Board of Directors.

In the first nine months of 2015, Abengoa have carried out the following divestments

1 – Abengoa has completed the second, third and fourth asset drop-downs (ROFO’S) to Abengoa Yield for total combined net proceeds of €694 million. Additionally, in relation to ROFO 4, as of September 30, 2015, the Company had not yet received an additional €65 million.

2 – The Company announced, in early 2015, a further reduction of its stake in Abengoa Yield, through the sale of 13% for more than €270 million. Additionally, on July 2015, Abengoa sold an additional 2% of Abengoa Yield shares for approximately €56 million.

Revenues in the Engineering and Construction segment reached €2,913 million and EBITDA grew by 21% year-on-year to €609 million, which represents a margin of 20.9%, driven mainly by a higher contribution from technology fees, vertical integration and O&M services. The Engineering and Construction division achieved positive bookings performance during the nine months of 2015, which totaled €4,136 million, a 15% increase year-on-year. This drives the backlog as of the end of September 2015 to a healthy €8,786 million. Backlog of Operation and Maintenance services totaled €5.3 billion. Additionally, the pipeline of identified commercial opportunities is approximately €166 billion, 1% increase quarter over quarter.

Revenues in the concession-type infrastructures segment reached €345 million, while EBITDA grew by 5% year over year up to €250 million. The average remaining life of contracted assets in concessions is over 24 years.

In the industrial production segment, that includes the bioenergy business, revenues increased by 2% to €1.614 million, while EBITDA was €32 million.