Abengoa’s geographic diversification continues to be one of the key factors behind its growth and strategy.

Abengoa (MCE: ABG.B/P SM /NASDAQ: ABGB), the international company that applies innovative technology solutions for sustainability in the energy and environment sectors, recorded revenues of €5,237 million for the first nine months of 2014, flat versus the same period of the previous year. EBITDA rose by 24 % to €1,071 million while net income increased to €100 million, a 38 % increase compared to the same period of 2013.

Total backlog as of September 30, 2014 totaled more than €47 billion; which represents a year-over-year increase of 10 %. It is comprised by an E&C backlog of €7.3 billion, growing 3 % over the E&C backlog as of September 2013, and a backlog of concessions contracted revenues of €40.3 billion, which increases by 11 % on a year over year basis. The pro-forma corporate net debt to corporate EBITDA ratio (Corporate Leverage Ratio) as of September 30, 2014 was 2.1x, 0.4x reduction versus the previous quarter, on track for full year 2014 target of 2.0x.

Abengoa’s geographic diversification continues to be one of the key factors behind its growth and strategy. North America and South America, representing 36 % and 25 %, respectively, of the first nine months revenues, continue to represent the key regions for Abengoa. Spain continues to decrease its weight representing 16 % now, while Rest of EU represents 13 %, Africa 7 % and Middle East & Asia 4 %.

Manuel Sánchez Ortega, CEO of Abengoa, said: “Once again the Company has been able to achieve strong operating performance, increasing our EBITDA by 24 % year over year during the first nine months of 2014 thanks to an improvement in our activities. We are also proud to translate these strong results into a solid net income growth, which has increase 38 % during the same period”. 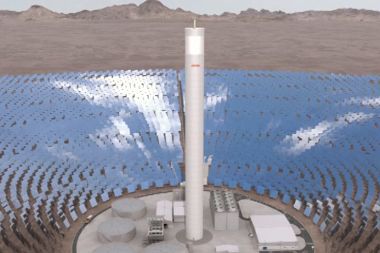 He went on to say “The first ROFO drop down announcement is a confirmation of the strategic importance of Abengoa Yield for Abengoa and a proof that it is a vehicle that enables us to maximize our return on the equity investments in the concessional assets on a recurrent and long-term basis, while at the same time it reduces Abengoa’s cost of equity and improves our business model”.

On September 22, 2014 Abengoa entered into a definitive agreement with Abengoa Yield, subject to the closing of financing, to sell three renewable facilities for a total amount of $323 million. The renewable assets sold consist of Concentrating Solar Power assets with a combined capacity of 131 MW located in Spain (Solacor and PS) and a 50 MW wind farm located in Uruguay (Cadonal). The closing of the operation is scheduled to be formalized before the end of the year and is framed within the Right Of First Refusal agreement signed by both companies.

Revenues in the engineering and construction segment decreased by 5 % to €3,090 million, while EBITDA decreased by 4 % to €504 million, which represents a margin of 16.3 %. The engineering and construction division achieved a positive bookings performance during the first nine months, with a total €3,595 million, a 1 % increase year over year. This brings the backlog as of end September 30, 2014 to a healthy €7,305 million. Additionally, the pipeline of identified commercial opportunities stands at approximately €166 billion, a 33 % increase year over year. The slight decrease in revenues during the first nine months of 2014, was due mostly to a negative impact from foreign exchange fluctuations, together with the termination of the execution of some large Concentrating Solar Power projects, such as Solana and Mojave in the US and Solaben 1&6 in Spain, and a softer ramp-up of newly signed projects.

Revenues in the concession-type infrastructures segment rose by 38 % to €569 million, while EBITDA increased by 58 % to €403 million. The increase is mainly driven by the new assets that have come into operation, and the strong performance and increased efficiency of the plants in operation. Backlog of long-term contracted revenues in the concession-type infrastructures segment totaled €40.3 billion as of September 30, 2014, increasing 11 % year-over-year. The average remaining life of contracted assets in concessions was approximately 25 years.

Revenues in the industrial production segment, which includes the bioenergy business, increased by 1 % to €1,578 million. EBITDA amounted to €164 million, compared to €81 million in the first nine months of 2013, an increase of 103 % year over year, mainly due to the strong performance of our operations in Brazil and US, added to an improvement in the EU market.