Abengoa is currently building two CSP projects in South Africa, the first in the nation.

Abengoa (MCE: ABG.B), the company that develops innovative technology solutions for sustainable development in the energy and environment sectors, today announces its unaudited consolidated financial results for the first half of the year ended June 30, 2013.

During the first six months of 2013, Abengoa generated €161 million of cash from its operating activities; while it closed the first half with total cash and cash equivalents of €3,222 million and a net corporate debt of €2,446 million, which represent a corporate net leverage ratio of 3.2x, versus 3.7x as of December 2012.

Abengoa’s geographic diversification continues to be one of the key factors behind its growth and strategy. It is remarkable that 30% of revenues come from the US, which strengthens its position as the main region, 27% from Latin America, 18% from Spain, 12% from the rest of Europe and 13% from Asia and Africa.

Manuel Sánchez Ortega, CEO of Abengoa, said: “Once again, we have been able to deliver another strong quarter, maintaining our double-digit top line and operating growth while increasing our visibility for the remainder of 2013 and 2014. Our E&C business is facing an excellent momentum in the market, thanks to our diversification, with new significant contract awards taking backlog to above €7.1 billion. And what is most important, the vast majority of these new awards will require no equity contribution from Abengoa, thus helping us to achieve our reduced CAPEX targets from 2014 on. I am also satisfied to say that we are seeing improved market conditions in Biofuels, and that the electric sector reform announced by the Spanish government in July will finally remove the uncertainty we’ve suffered for almost two years.”

He added, “We continue working with priority on our €1.5 billion asset rotation plan for the next 18 months, to reduce the corporate leverage and reduce our CAPEX. All in all, our goal is to generate free cash flow at the corporate level in 2014.”

During the second quarter of 2013, Abengoa successfully closed the sale of 100 % of its subsidiary, Befesa, to funds advised by Triton, following the approval by competition authorities. After customary net debt adjustments, total equity consideration to Abengoa amounted to €620 million. This transaction was another successful step in Abengoa’s strategy to focus on its core activities, which include the engineering, development and operation of solar-thermal plants, water desalination plants, transmission lines and biofuels production plants. Furthermore, it proves Abengoa’s successful investment and asset rotation track record. Additionally, during the second quarter of 2013, Abengoa closed the sale of Bargoa to Corning Incorporated, one of the company’s Brazilian subsidiaries that manufactures telecommunications components.

Revenues in the Engineering and Construction (E&C) segment, including the result from technology activities, increased by 17% to €2,182 million. EBITDA increased by 24% to €350 million, which represents a margin of 16.0%. The E&C division continued building momentum this quarter, with new order bookings driving the total backlog to €7,133 million as of June 30, 2013, an increase of 14% from the previous quarter. Finally, the E&C pipeline of identified commercial opportunities is approximately €110 billion, providing great visibility into the future.

Revenues in the concession-type infrastructures area, which primarily comprises electricity generation and transmission, increased by 31% up to €236 million during the first half of 2013; with an EBITDA of €140 million, which represents a margin of 59.3%. The increased business activity was mainly driven by the start of several concessions (Qingdao desalination plant in China, the Manaus transmission line in Brazil and the cogeneration plant for Pemex in Mexico) which offset a weaker year-over-year performance in Solar as a result of the Spanish government’s successive reforms of the electricity sector at the beginning of 2013 and the highly unfavorable weather conditions during the quarter.

Revenues reported for the industrial production segment – which just includes the bioenergy business – increased by 8% up to €984 million. EBITDA also increased up to €41 million, compared to €5 million in the first six months of 2012, an increase of 681%. The better results in the first half of 2013 were mainly due to the higher ethanol sales prices in Europe and the United States and the higher cane crushed capacity in Brazil along with a significant increase of the crush spread in Europe and the United States. 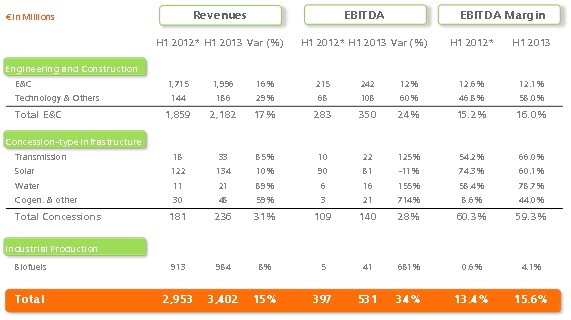 The Company applied new accounting standards IFRS 10 Consolidated Financial Statements and IFRS 11 Joint Arrangements as of January 1st, 2013 (with retrospective application for comparative purposes) and accounted for Befesa as a discontinued operation in both periods presented, in accordance with IFRS 5. In addition, the Company changed the application of IFRIC 12 prospectively from January 1, 2011, with a catch up adjustment on Jan. 1 2011 as a result of a reassessment made after the regulatory reform for the electric sector announced on July 12, 2013.

Additionally, the Company has provided an asset rotation plan over the next 18 months which could bring up to €1.5 billion in cash and has indicated that it targets to achieve a Ratio of Net Corporate Debt to Corporate EBITDA in the range of 3.0x in 2013 and in the range of 2.5x or lower from 2014 onwards. Also, it intends to reduce its annual Corporate Capex to approximately €450 million per annum from 2014 on.

All in all, the Company has indicated its target to generate positive free cash flow at the corporate level by 2014.

Manuel Sánchez Ortega, CEO of Abengoa, and Bárbara Zubiría Furest, Co-CFO, Head of capital markets and investor relations, will host a conference call to present the results, which will be simultaneously broadcast over the internet, at 6.00 pm (Madrid time) and 12.00 pm (New York time) today.

To access the conference call please dial +34 91 788 93 03. The conference can be followed live via Abengoa’s website (www.abengoa.com). We recommend accessing the website at least 15 minutes before the start of the conference to be able to register and download the audio software required.

A recording of the conference will be available in the Shareholders and Corporate Governance section of the Abengoa website approximately two hours after it has finished.