XiNa Solar One, with a capacity of 100 MW, provides clean, sustainable and dispatchable electrical energy to 95 000 South African households, especially in peak hours, thanks to its 5½ hours storage system.

The power plant provides renewable energy to a country that is still heavily dependent on fossil fuels.

XiNa Solar One is the third solar thermal plant that Abengoa has developed in South Africa.

Abengoa (MCE: ABG.B), the international company that applies innovative technology solutions for sustainability in the infrastructure, energy and water sectors, and its partners, the Industrial Development Corporation (IDC), the Public Investment Corporation (PIC) and the Community Trust, today officially inaugurated XiNa Solar One, the third solar thermal plant in South Africa developed by Abengoa. The plant, which has been operating for more than nine months at full load required an investment of R9.459-million for its construction.

The inauguration was attended by dignitaries such as the Minister of Energy, Mr Jeff Radebe; members of the local community in Pofadder, the media; and the business fraternity. 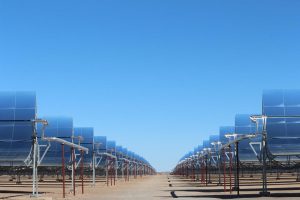 According to Joaquín Fernández de Piérola, CEO of Abengoa, the launch of XiNa Solar One represents “a decisive milestone for renewable energy in South Africa and consolidates the presence of Abengoa in the country, where it has been operating since 2009”.

“We are very proud of Kaxu, Khi and XiNa Solar One, which contribute 250MW of renewable energy to the national generation. This is a huge milestone in relation to the country’s energy needs, using local clean resources, and we are excited at the prospect of participating in new projects,” Mr Fernandez de Pierola explained.

Speaking at the launch of the project, the IDC’s Divisional Executive for Agro-processing, Industrial Infrastructure and New Industries, Ms Lizeka Matshekga, said the XiNa Solar One project primarily fulfilled the corporation’s mandate of developing the rural economy by facilitating the creation of employment opportunities in such remote areas.

“What is perhaps fundamental to the IDC is that these projects signifies our commitment to unearthing the potential of renewable energy but more important is the fact that the economic and social impact of this project has already taken effect in Pofadder. We expect small and medium size entities spread across this area to benefit from significant supply chain opportunities created by this project,” says Matshekga.

Head of Corporate Affairs at the PIC, Mr Deon Botha says: “We are very pleased with our partnership with IDC and Abengoa in the conclusion of XiNa Solar One. We believe that this project will contribute greatly to South Africa’s energy security in an environmentally friendly manner. As a long-term investor, the PIC is interested in the sustainability of the investments we make, the social impact that these investments have in their surrounding communities and the financial returns for the benefit our clients. We believe that XiNa will assist us to realise these objectives”.

XiNa Solar One is located near Pofadder, in the Northern Cape Province, and is bordered on the north by Kaxu Solar One, another Abengoa project. Kaxu Solar One was the first power plant in operation that featured parabolic trough collector technology in South Africa, a 100 MW output and 2½ hours of thermal molten salt storage. Both plants make up the largest solar platform in sub-Saharan Africa, helping South Africa meet its ongoing energy demands by supplying clean and reliable electricity. XiNa Solar One features important technical improvements in its solar field and storage system which makes it a very competitive plant.

The other two plants Abengoa previously constructed in South Africa are already commercially operational. KaXu Solar One came into commercial operation in 2015, and the 50 MW Khi Solar One plant, since the beginning of 2016. The latter was the first operational solar thermal plant that uses the technology of tower and heliostats in South Africa and on the African continent.

Thanks to these projects Abengoa has helped to regenerate the economic, social, industrial and environmental fabric of this area in South Africa. During the construction phase of XiNa Solar One, job creation peaked at over 1 300 positions, to which another 80 have been added in the operation phase, the duration of which is for the next 20 years. Now that the project is operational, the plant produces clean energy to serve more than 95 000 South African households and prevents the emission of an estimated 348 000 tons of CO2 each year. XiNa Solar One is the country’s first solar thermal plant designed to operate based on the so-called ‘energy sale windows’ that are detailed in an electricity calendar, in accordance with the agreement signed with Eskom, South Africa’s power utility and final client of the plant, to which the production at the plant is aligned. This energy sale windows corresponds to the peak hours, the periods of time with the higher consumption of electrical energy. 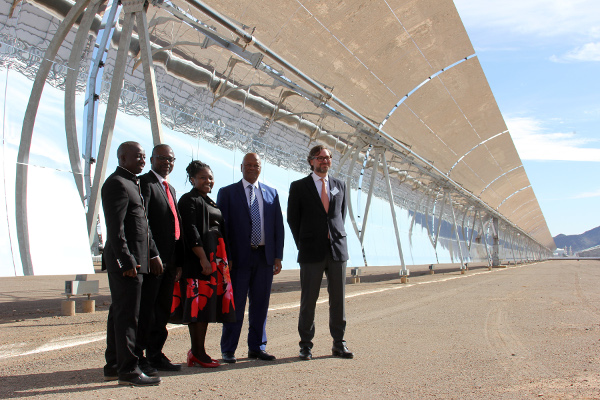 Joaquín Fernández de Piérola, CEO of Abengoa, and minister of Energy Jeff Radebe, next to representatives from IDC & IPP 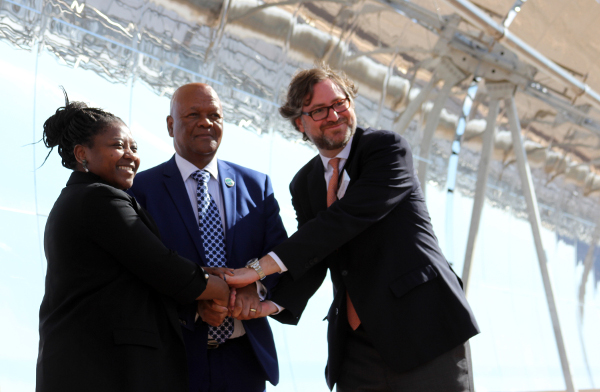 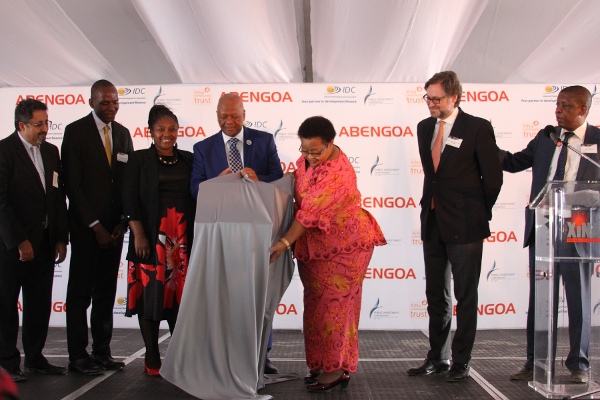 Moment of the ceremony launch

Established in 1940, Industrial Development Corporation (IDC) is a national development finance institution set up to promote economic growth and industrial development. They are owned by the South African government under the supervision of the Economic Development department. Their primary objectives are to contribute to the creation of balanced, sustainable economic growth in South Africa and on the rest of the continent. IDC promotes entrepreneurship through the building of competitive industries and enterprises based on sound business principles.

The Public Investment Corporation (PIC) is a public asset management firm wholly owned by the South African government, with the Minister of Finance as the sole shareholder representative of the government. The PIC’s clients are mostly public sector entities including the Government Employees Pension Fund, which contribute 90% of the funds that PIC manages. Other clients include Unemployment Insurance Fund, Associated Institutions Pension Fund, Compensation Commissioner Pension Fund and Compensation Commissioner Fund.

The PIC is a hybrid of a single asset manager and a multi-manager with emphasis on providing its clients with value at a low cost and invests in established names with strong management requiring little oversight. PIC is a world class asset management company, and it boasts more than 100-year reputation of delivering excellent results. It is the largest and most successful asset manager on the African continent with assets under management in excess of R 1.928-trillion as at 31 March 2017.

The PIC invests in a variety of asset classes such as the following: