The Spanish renewable energy group may have won a new lease on life, but it still has to convince other shareholders to accept the deal, which would mean suffering a severe haircut.

Abengoa’s financial troubles has slowed the company’s projects in Chile.

According to the plan, existing creditors would swap 70% of debt for a 40% stake in the company. Abengoa could then refinance the remaining 30% through new debt instruments. The company would also receive € 307 million in new guarantees from investors in return for a 5% share.

The Seville-based group must now convince 75% of its creditors to back the deal by Oct. 28. Abengoa filed for preliminary court protection in November after efforts to raise necessary capital proved unsuccessful. The company is struggling under a €9.4 billion mountain of debt. 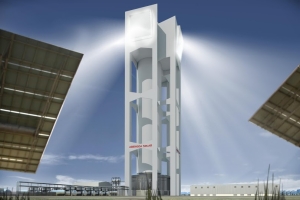 Some analysts have remain pessimistic about the deal, however. Bloomberg cited Felix Fischer at Lucror Analytics in Singapore, who expressed doubt in Abengoa’s business model and pointed out that the company’s other shareholders not involved in the financing agreement would have to accept “a substantial haircut.”