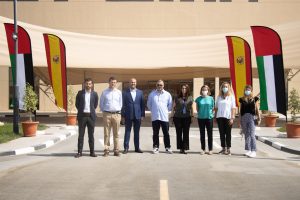 Abengoa, an international company that applies innovative technology solutions for sustainable development in the infrastructure, energy and water sectors, received on November 4 a visit of the Spanish Business Council (SBC), the Spanish Chamber of Commerce in the United Arab Emirates (UAE), in the solar field of the Noor Energy 1 project, which it is building as part of the largest solar complex in the world, the Mohammed bin Rashid Al Maktoum Solar Park, in Dubai.

Abengoa is being in charge of providing technology and design, engineering and construction, for Shanghai Electric Group Co. Ltd., of the Noor Energy 1 project, of three parabolic trough plants, of 200 MW each, with 12 hours of storage in molten salt, which are part of Phase IV of the Mohammed bin Rashid Al Maktoum Solar Park complex. The collectors installed in this plant, Spacetube 8.2 ++, represent the new generation of big aperture parabolic trough collectors, developed by Abengoa. It is the biggest aperture commercial collector on the market and whose innovative design resulted in important improvements regarding its optical accuracy, optimization of assembly and a reduction in manufacturing and installation costs.

Abengoa is a world leader in both technological and installed capacity in solar thermal technology, where it has developed, designed, built and/or operated solar thermal plants in four continents, with a total capacity of 1.9 GW, representing approximately 30% of capacity worldwide. In addition, the company is currently participating in 52% of solar thermal capacity under construction.