The Solana Concentrating Solar Power plant was built by Abengoa Solar, a subsidiary of a Spanish company, and it is sending test power to Arizona Public Service Co.

A massive new concentrated solar power plant near Gila Bend that has the unique ability to produce power long after the sun sets has begun sending power to the grid.

The CSP plant is expected to reach its full capacity in October. Once it’s fully up and running, Solana will, for a time at least, be the largest concentrating solar power plant of its kind in the world.

Later this year, a project in California called Ivanpah, developed by BrightSource Energy, NRG Energy and Google, is scheduled to come online with even more capacity. That project, southwest of Las Vegas, is more than 92percent complete, according to BrightSource.

But the real benefit of Solana is not just its maximum capacity. It’s the fact that unlike other solar plants, APS will be able to dispatch that power not just when the sun is shining, but whenever power is needed. It represents a new class of solar plants that can store heat and use it to produce electricity when demand is highest, even if that peak is hours later. In doing so, the plants get around a major hurdle that utilities face when trying to increase the amount of solar power on the grid.

With other solar plants, and renewable projects such as wind turbines, utilities must take the electricity when nature provides it and use it immediately. As a result, traditional solar plants can’t produce electricity sometimes when demand is high, such as the early evening. 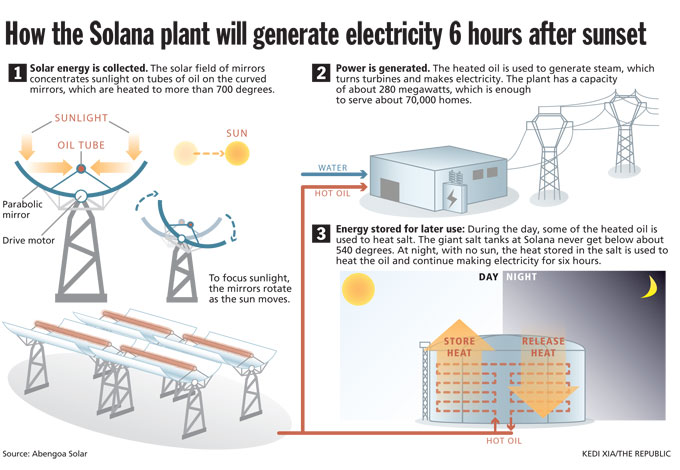 Utilities have experimented with batteries to help smooth out the variable power that comes from renewable projects, and it may become more common to equip household solar panels with batteries in the future if prices come down. But Solana’s technology will demonstrate how to match the output of big solar projects with customer demands.

“We can shape the power coming out of the unit,” said Pat Dinkel, APS vice president of resource management.

Solana doesn’t use common black solar panels to convert sunlight to electricity. Instead, it uses large curved mirrors to focus the heat of the sun on tubes of oil. That oil is used to heat water and make steam, which spins turbines and makes electricity.

Some of the superheated oil also is used to heat salt. Massive tanks containing 120,000 metric tons of molten salt at the power plant can then be used to continue making steam, and electricity, after sunset, when common solar-power plants stop making power.

“That is a game-changer from our perspective,” said Brad Albert, general manager of resource management for APS.

For example, on hot summer days, the demand for electricity from APS customers is highest in the late afternoon. That is exactly the time that traditional solar panels are ramping down because the sun is low in the sky. But Solana’s stored heat can be used to run the plant at a high capacity at that time, and six hours into the evening.

Those so-called peak-demand hours are when it is most expensive to buy power on the market, which APS and other Arizona utilities must do every summer. With Solana, APS will be able to offset a portion of the power it purchases during the most expensive hours of the day.

In the winter, the output can similarly be matched to the unique fluctuations in customer demand, which don’t always coincide with sunshine, officials said.

“Our task here is to get the maximum absolute value for the energy,” Albert said. “We can shift the production to these maximum-value periods.”

Other utilities are also making their first purchases from solar-thermal power plants. A company called SolarReserve LLC of Santa Monica, Calif., is building a solar-thermal plant in Nevada to serve that state’s major utility, NV Energy.

The Crescent Dunes plant will have a maximum capacity of 110 megawatts but will also be able to store heat similarly to Solana for as long as 10 hours after sunset. That allows the plant to dispatch power on hot afternoons when demand is high from air-conditioners, or late at night when the Vegas Strip is humming. That project is scheduled to be completed soon.

The Ivanpah project in California will not use heat storage. The peak electricity demand from customers in that state tends to match up well with sunshine, with people using the most electricity for air-conditioning and other appliances at times when the sun is high in the sky. California’s summer days tend to cool off late in the afternoon, unlike metro Phoenix, which remains hot into the evening during the warmest months.

Even without using heat storage, the power from solar-thermal plants is more consistent than that of photovoltaic power plants, which fluctuate with every passing cloud. The heated-oil and steam turbines used in solar-thermal plants are less prone to minor weather fluctuations.

The performance of the first few solar-thermal power plants such as Solana, Ivanpah and Crescent Dunes will inform utilities whether the technology is as viable as promised, and is sure to be watched closely.

Dinkel and other APS officials have been observing the test power at Solana from special monitors set up in the utility’s downtown Phoenix headquarters.

“They are making nice progress,” Dinkel said. “It looks very positive for the plant coming online in the next month or so.”

Solana has been sending as much as 120 megawatts of capacity to the grid during the tests. One megawatt of capacity from a power plant is about enough electricity to supply about 250 homes at once. The plant will have a maximum capacity of 280 megawatts, enough for about 70,000 homes when the plant is running. The Ivanpah project in California, once it comes online, will have a capacity of 392 megawatts.

APS will pay a premium to purchase power from the plant. APS officials said in 2008 when they signed the agreement to buy power from Solana that the average price is about 14cents per kilowatt-hour, or about 20 percent higher than power from natural-gas plants at the time the deal was signed.

APS will buy about $4 billion worth of electricity from the plant during its expected 30-year lifespan. APS is buying all of the power from Solana.

Though Solana will make a large contribution, APS still will get only a fraction of its power from solar and renewables. It will be receiving 12percent of its total supply from renewable sources by 2016. Regulators require APS and other regulated utilities in the state to get 15percent from such sources by 2025.

To test the capability of Solana, officials have been running the plant at partial power and even turning it on in the middle of the night to ensure the systems are working as planned.

“They are testing all the equipment now,” Dinkel said. “They brought it up the other day and there was some vibration in one of the turbines. Normal stuff. (The turbine vendor) rebalanced it.”

He said it is common for power plants of all types to run through such assessments before selling commercial power.

Once all the systems are determined to be working properly, Abengoa will run longer tests where the plant must hit certain benchmarks for power production. Then the plant will begin sending commercial power to APS under a long-term purchase agreement.

Though Solana and Ivanpah are significantly larger than other solar-power plants built to date, even bigger projects are in the works using solar-panel technology.

The Agua Caliente Solar Project east of Yuma, built by Tempe-based First Solar Inc., is the largest operational solar-power plant using photovoltaic, or solar-panel, technology. It has 250 megawatts of capacity so far and will have 290 when completed next year. First Solar is working on an even larger plant in Riverside County, Calif., called Desert Sunlight, that is expected to have 550 megawatts of capacity from solar panels when complete in 2015.