Abengoa (MCE: ABG.B), the international company that applies innovative technology solutions for sustainability in the infrastructure, energy and water sectors, was awarded, thanks to the solar thermal plant Xina Solar One, in the fifth edition of the Industry Awards, which were held during the 18th annual African Utility Week. 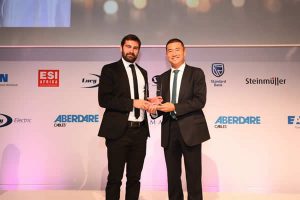 Xina Solar One, which was officially inaugurated last week in an act which was attended by Jeff Radebe, minister of Energy in South Africa, was recognized in the Grid-Tied Renewable Energy Project Award (10MW+) category. Two photovoltaic plants in Uganda were also finalists: Access Power (EREN RE) and Toronto Solar Power Station (Building Energy).

The award was presented to Javier Payán Mogollo, Chief financial officer of Abengoa in South Africa, a ceremony that brought together 800 of Africa’s most renowned power, energy and water industry professionals.

XiNa Solar One is located near Pofadder, in the Northern Cape Province, and is bordered on the north by Kaxu Solar One, another Abengoa project. Kaxu Solar One was the first power plant in operation that featured parabolic trough collector technology in South Africa, a 100 MW output and 2½ hours of thermal molten salt storage.

All three plants Abengoa constructed in South Africa are already commercially operational. KaXu Solar One came into commercial operation in 2015, and the 50 MW Khi Solar One plant, located in Upington also in Northern Cape province, since the beginning of 2016. The latter was the first operational solar thermal plant that uses the technology of tower and heliostats in South Africa and in the whole African continent.