The turnkey EPC was developed for the Saudi corporation ACWA Power and required an investment of more than €300 million.

The Bokpoort concentrated solar plant, built by a joint venture  between Spain’s ACCIONA, SENER and TSK and South Africa’s Crowie, was  inaugurated today near Upington in Northern Cape Province of South Africa. The  Saudi group ACWA Power awarded the EPC (Engineering, Procurement and  Construction) contract for the turnkey project to the Spanish-led consortium,  and required an investment of more than €300 million. 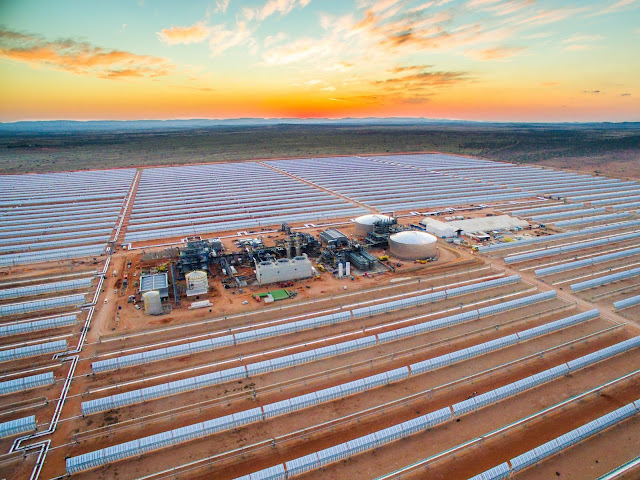 The new concentrated solar  plant at Bokpoort is  already in operation and has a gross capacity of 55 MW. It uses SENERtrough®  parabolic trough collector technology with a 1,300 MWht system of two energy  storage tanks (TES – Thermal Energy Storage) using molten salts that provide  9.3 hours of operation. The solar field of the plant consists of 180 loops, and  its annual production will be over 230 GWh (net).

Bokpoort is the fourth concentrated solar plant built by ACCIONA outside  Spain and its inauguration underscores ACCIONA’s commitment to the development  of renewable energy in South Africa. In late 2014 ACCIONA’s Sishen photovoltaic  plant (94.3 MWp

[74 MW nominal]) was put into operation and in August  2015, the Gouda wind farm came on stream with a capacity of 138 MW. Both are  owned by a joint venture in which ACCIONA Energy (the renewable energy division of ACCIONA) holds a majority stake.

At  present, ACCIONA and SENER are building a 100MW solar thermal complex at Kathu,  a turnkey project for GDF Suez.

For its part, along with Kathu and Bokpoort, SENER has  a third thermosolar plant in South Africa. In these three projects, SENER  supplies key technology such as the SENERtrough® parabolic  trough collectors and the molten salt storage system that enables the plants to  continue to produce electricity in the absence of solar radiation. In total,  SENER has performed work on 29 thermosolar plants, the majority of which have  been turnkey constructions, in Spain, the USA, South Africa and Morocco,  representing over 2,000 MWe of installed capacity and a saving of more than a  million metric tons of CO2, all of which confirms the company’s  position as a leader in thermosolar energy.