The lowest bids in two tenders for up to 350 MW of concentrated solar power (CSP) capacity in Morocco have been made by tie-ups led by Saudi Arabia’s ACWA Power and Spanish firm Abengoa, Reuters reported.

The lowest bids in two tenders for up to 350 MW of concentrated solar power (CSP) capacity in Morocco have been made by tie-ups led by Saudi Arabia’s ACWA Power International and Spanish firm Abengoa.

Results of tenders for constructing and operating the two Concentrated Solar Power (CSP) plants near the city of Ouarzazate, one of at least 200 MW and the other of at least 100 MW, are expected in the next few weeks, the sources said. Then plants are scheduled to start generating power in 2017.

The two Concentrated Solar Power (CSP) plants are the second phase of the 500 MW Ouarzazate project, which is part of a government plan to produce 2 gigawatts of solar power by 2020, equivalent to about 38 percent of Morocco’s current installed generation capacity. 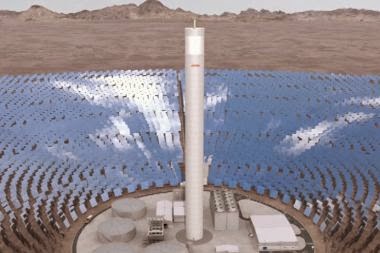 The three groups have also pre-qualified for the 100 MW (Noor III) tender, along with another consortium led by Electricite de France. The consortium led by ACWA group, which includes Spanish international engineering company Sener, bid $0.1601 per kilowatt-hour in power tariffs from the completed plant, the lowest bid received by Masen to build Noor II, the sources said.

Abengoa’s consortium made the cheapest offer of $0.1672 per Kwh to build Noor III. If Masen decides to combine the bids for the two plants, the ACWA bids overall would beat Abengoa’s, the sources said.

“The two options have been considered. We are studying the two tenders separately as the technology is not the same, but we are also considering combining the two bids as almost the same bidders have been selected for the two plants,” a source from Masen said.

To finance the plants, Morocco has secured loans of $519 million loan from the World Bank, 654 million euros from German state-owned bank KFW, and the rest from the African Development Bank (AfDB), the European Commission and European Investment Bank. ACWA Power is already building a 160 MW plant in the first stage of the project in the Ouarzazate area.