The project was selected within the 3.5 bid window under South Africa’s Renewable Energy Independent Power Producer Procurement Programme (REIPPPP), which aims to add 3,725 MW of clean power to the country’s energy generation mix.

It will receive an average tariff of ZAR 1.46 per kWh (USD 0.100/ EUR EUR 0.090) over 20 years, South Africa’s Department of Energy said, noting that the third REIPPPP bidding round achieved significant price reductions compared with the ZAR 2.68/kWh bids of CSP projects during the first round. 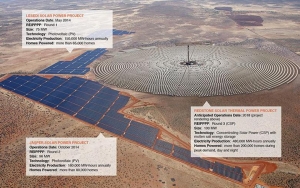 Located in Postmasburg, near Kimberley in the Northern Cape province, the Redstone solar thermal power project will feature 12 hours of full-load energy storage thanks to SolarReserve’s molten salt energy storage technology in a tower configuration. The project will also have dry cooling of the power generation cycle to minimize water use.

Redstone will be built adjacent to the 75 MW Lesedi and 96 MW Jasper photovoltaic (PV) solar power projects developed by SolarReserve and its investment partners. Together, the three projects will combine CSP and PV for a total of 271 MW of generating capacity. Redstone, alone, is expected to produce more than 480,000 MWh of electricity per year.

The project will be financed with ZAR 2.4 billion of equity investment and ZAR 5.6 billion of debt provided by local and international lending institutions, SolarReserve said on its website.