A pair of policy researchers at Potsdam University’s Institute for Advanced Sustainability Studies in Germany have a suggestion for policy to advance high temperature Concentrated Solar Thermal (CST) technologies. 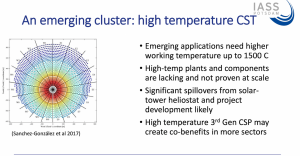 But policy researchers Richard Thonig and Johan Lilliestam make the case for moving faster to commercialize much higher temperature solar technologies – at up to 1500°C.

“The complete decarbonization of the economy is one of the great challenges of our time. While the power sector is leading the way, other sectors such as industrial processes and aviation lag behind and need to deploy pre-commercial technologies at very large scale in the next 30 years to reach climate neutrality,” their paper notes.

There is already a huge trove of current research in solar thermochemistry at up to 1500°C. Very high temperature CSP and CST for industrial heat and solar fuels is being advanced by scientists globally – at Sandia in the US, DLR in Germany, ETH in Switzerland, King Saud University in Saudi Arabia and ASU in Australia, among others.

But how to achieve this faster realization to jumpstart the commercialization of “the hot solar” to complete the carbon free future? The new paper proposes that; Concentrating Solar Technology Policy Should Encourage High Temperatures and Modularity to Enable Spillovers

“Spillovers create a larger market,” explained Thonig. “If we design policy to enable one CST or CSP technology to expand or to develop, can we do it in a way that it also benefits the application of CST in other sectors? To build solar chemistry, or to build high temperature heat applications; it’s very likely that progress in either one of those applications will also enable progress in the other. So one application improving will also have benefits for the other.”

An example of spillover is thermal energy storage in CSP which is already “spilling over” to a separate standalone application beginning to be commercialized by CST firms like Malta. Industry heat applications for solar collectors is another example:

“We have already seen how parabolic trough development for CSP has led to very good mirrors in solar industrial process heat and very good products that are already available there,” he noted.

These spillovers involved today’s technologies and medium temperatures. Parabolic trough CST can replace fossil fuels with solar heat in district heating, industrial drying and heat up to about 400 C. 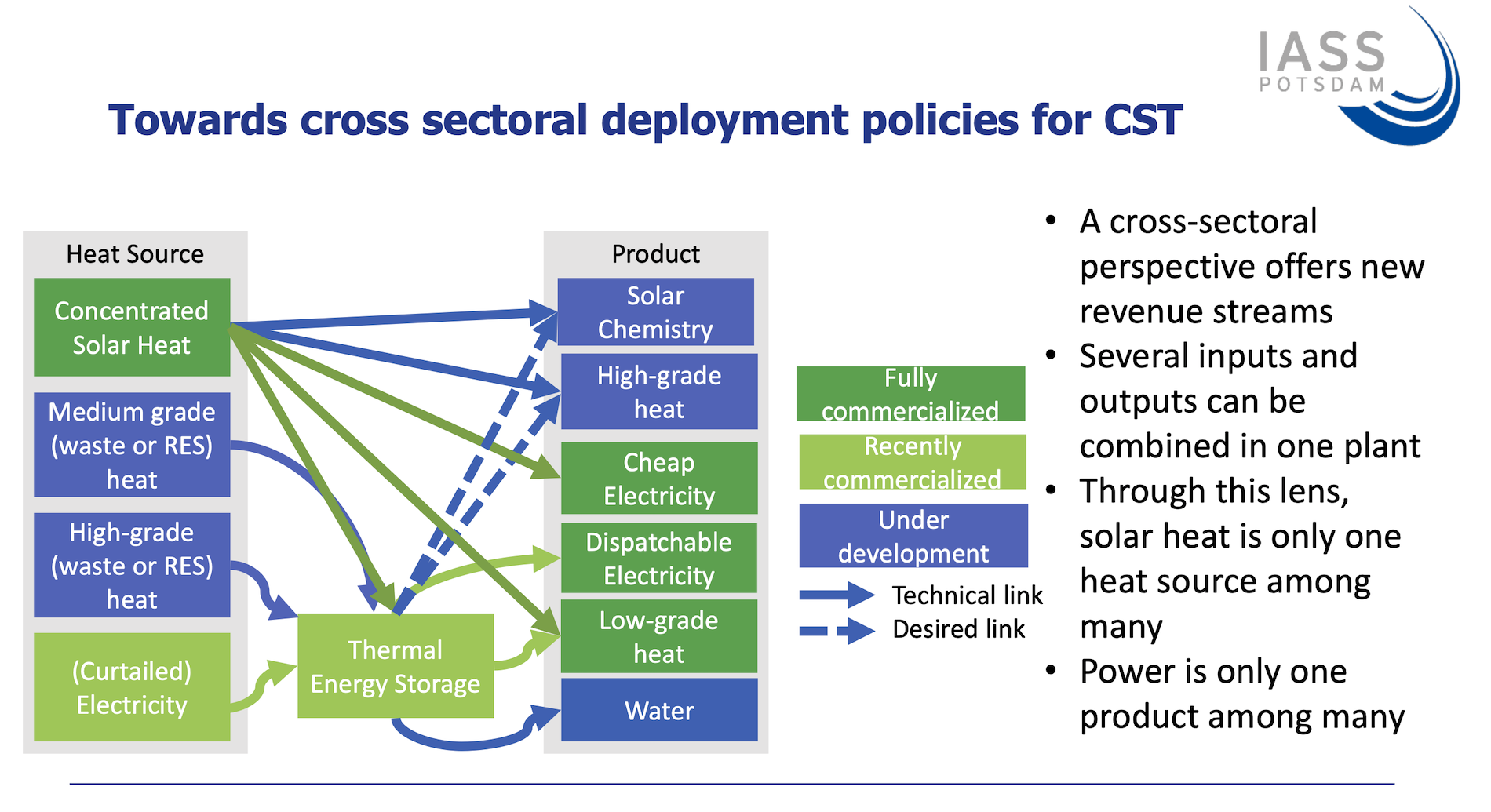 “So if you want to enable spillovers for high temperature CST applications, your RFPs for new CSP plants need to include some provision of the heat into their call,” said Thonig. “The heat is the critical point, and it needs to be the receiver outlet temperature. Because this is the crucial solar part. It’s not only about the temperature that reaches the turbine.”

This receiver temperature is important because in CST, the heat is tapped directly from the solar field to catalyze chemical reactions or to rearrange molecules to make new materials.

Unlike CSP that produces electricity thermally at temperatures from 400°C to 600°C, there is no power block of turbines and generators involved in thermochemistry (when it is not run as a combined heat & power plant).

Instead, for high-temperature CST, the solar field must achieve greater accuracy, as the receiver, and potentially the thermal storage must operate at higher temperatures; from 700°C up to 1500°C.

Although this high temperature CST technology is in its infancy, with just the first few projects in the pilot stage, from startups like Synhelion and Helioheat and Heliogen; in the future, solar thermochemistry has the potential to provide all our global needs for green hydrogen and solar aviation fuel. But how do we scale it up in a short time?

“So the question is, how can we give these novel high temperature towers some kind of innovation premium, because the technology is not as mature as other CSP technologies or fossil alternatives. To make it happen we need to move the perception of policymakers in most places, that mostly care about which is the currently cheapest pathway for them to get, for example, green hydrogen right now,” he commented, adding that mandates and renewable quotas or carbon taxes won’t help innovation in still expensive technologies.

A coalition of the willing

Thonig considers that China and Spain are well placed to jumpstart a new high temperature CST industry, having already invested in creating a durable supply chain by protecting their CSP pioneers.

But many sunny regions globally would benefit from this future technology that requires good DNI. These include Chile, Australia, the US Southwest, the Middle East and North Africa. In particular Texas, West Australia and Saudi Arabia, with their access to existing seaport infrastructure for shipping fuels would have a jump start on any new solar fuels industry.

He believes there’s the best chance of success if a coalition of countries works together to advance high temperature CST from pre-commercial pilots to large scale applications. “We need a new “coalition of the willing” he said.

With a new SolarPACES Chair who’s pioneered high temperature solar thermochemistry research and a new Vice-Chair who’s reported Australia’s CST technology status to the IPCC, perhaps the time is right for such an international coalition to be brought together to focus on early-stage deployment of high temperature CST technologies at the 2022 SolarPACES Conference to be held in the US Southwest.