When UN Secretary-General Antonio Guterres launched the International Solar Alliance last October, he applauded the goal of mobilizing about $1 trillion dollars towards the deployment of some 1,000 gigawatts of solar energy by 2030. 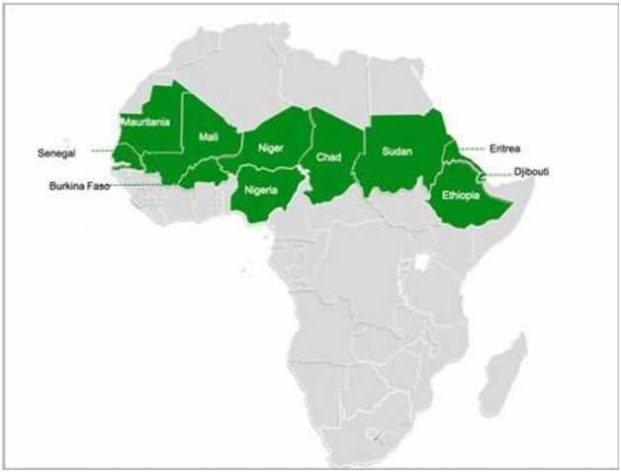 “It is clear,” he said, “that we are witnessing a global renewable energy revolution.”

That revolution is also taking place under the leadership of the African Development Bank (AfDB) which has embarked on a highly ambitious solar project to make Africa a renewable power-house, titled “Desert to Power (DtP) Initiative”.

This project is expected to stretch across the Sahel region by tapping into the region’s abundant solar resource.

The Initiative aims to develop and provide 10 GW of solar energy by 2025 and supply 250 million people with green electricity including in some of the world’s poorest countries. At least 90 million people will be connected to electricity for the first time, lifting them out of energy poverty.

The AfDB has rightly pointed out that lack of energy remains a significant impediment to Africa’s economic and social development.

Initiated back in 2017 by the AfDB, the DtP has been described “a big and bold ambition: to light up and power the Sahel by building electricity generation capacity of 10 GW through photovoltaic (PV) and Concentrated Solar Power systems via public, private, grid and off-grid projects by 2025, and consequently transform the industry, agriculture and economic fabric of the entire region”.

Dr. Akinwumi Adesina, President of the African Development Bank, speaking in Ouagadougou, capital of Burkina Faso where he attended the G5 Sahel Summit, emphasized the importance of political will in the success of the “Desert to Power” initiative, whose goal is to guarantee universal access to electricity for over 60 million people through solar energy.

The Burkinabe President Mark Roch Christian Kaboré applauded the Bank’s Desert to Power initiative, and also highlighted his country’s excellent relationship with the Bank, expressing his thanks for the portfolio of projects implemented. The President of AfDB is an invited guest at the G5 Sahel Summit of heads of state and government held on 13 September.

Dr. Adesina has drawn attention to the paradox that one of the world’s sunniest regions lacks access to electricity: “Now, more than ever, cooperation and cross-border trade in energy are essential to maintaining a secure supply over the long term given the challenges of climate change,” he said, adding that “in Burkina Faso, significant steps have been taken with the Bank-supported Yeleen rural electrification project.”

As part of its electrification strategy for Africa, the Bank is committed to accelerating access to high quality, low cost energy for the continent’s people. Critical network connections have been approved by the Bank’s Board: Mali-Guinea, Nigeria-Niger-Benin-Burkina Faso and Chad-Cameroon.

The Yeleen Rural Electrification Project, involving the production of off-grid energy in Burkina Faso, is the first venture under the DtP initiative.

A low-income Sahelian country, Burkina Faso has been negatively impacted by extreme climate variations such as declining rainfall, rising temperatures, floods and droughts. With installed capacity of 285 MW, about 3 million households in Burkina Faso are completely without power.

Of Burkina Faso’s 19 million population, 90% live in rural areas, where electricity access – mostly through diesel generators – stands at just 3%. Agriculture, the mainstay of Burkina Faso’s rural economy, is also the most vulnerable to the impacts of climate change.

The project is financed through the Bank’s African Development Fund, in addition to co-financing mobilised by the Bank from the Green Climate Fund (GCF), and the European Union. The project will also leverage private sector investments through equity and debt raised from commercial banks.

It will harness solar energy to deliver access to more than 900,000 people in rural areas – nearly 5% of the country’s population, and is expected to result in an average annual CO2 emissions reduction of 15,500 tons.

Meanwhile, Guterres said that renewable energy accounted for some 70 per cent of net additions to global power capacity in 2017.

Solar energy is at the centre of this revolution, he declared

“We need to rapidly shift away from our dependence on fossil fuels,” he said. “We need to replace them with clean energy from water, wind and sun. We must halt deforestation, restore degraded forests and change the way we farm.”

The alternative to moving to green energy, he said, “is a dark and dangerous future”.

According to AfDB, energy poverty in Africa is estimated to cost the continent 2-4 % GDP annually. The details of the “Desert to Power Initiative” were outlined as part of the Paris Agreement climate change talks at COP24 in Katowice, Poland.

“Energy is the foundation of human living – our entire system depends on it. For Africa right now, providing and securing sustainable energy is in the backbone of its economic growth,” said Magdalena J. Seol in the AfDB’s Desert to Power Initiative.

“A lack of energy remains as a significant impediment to Africa’s economic and social development. The project will provide many benefits to local people. It will improve the affordability of electricity for low income households and enable people to transition away from unsafe and hazardous energy sources, such as kerosene, which carry health risks,” added Seol.

Construction of the project will also create jobs and help attract private sector involvement in renewable energy in the region.

Putting the problem in its right perspective, Guterres said in the past decade, prices for renewables have plummeted and investments are on the rise. “Today, a fifth of the world’s electricity is produced by renewable energy. We must build on this.”

He said the world is seeing a groundswell of climate action.

“It is clear that clean energy makes climate sense. But it also makes economic sense. Today it is the cheapest energy. And it will deliver significant health benefits. Air pollution affects nearly all of us, regardless of borders.”

“We need to do this from the biggest cities to the smallest towns. The opportunities are tremendous.” He said some 75 per cent of the infrastructure needed by 2050 still remains to be built.

“How this is done will either lock us in to a high emission future or steer us towards truly sustainable low-emissions development. There is only one rational choice.”

According to AfDB, many women-led businesses currently face bigger barriers than men-led enterprises to accessing grid electricity – so the project has the potential to increase female participation in economic activities and decision-making processes.

The project has been launched in collaboration with the Green Climate Fund, a global pot of money created by the 194 countries who are party to the UN Framework Convention on Climate Change (UNFCCC), to support developing countries adapt to and mitigate climate change. The program is designed to combine private sector capital with blended finance.

“If you look at the countries that this initiative supports, they’re the ones who are very much affected by the climate change and carbon emissions from other parts of the world,” said Seol.

The African continent holds 15% of the world’s population, yet is poised to shoulder nearly 50% of the estimated global climate change adaptation costs, according to the Bank.

These costs are expected to cut across health, water supply, agriculture, and forestry, despite the continent’s minimal contribution to global emissions.

However, the International Renewable Energy Agency (IREA) estimates that Africa’s renewable energy potential could put it at the forefront of green energy production globally.

Other renewables projects in Africa include The Ouarzazate solar complex in Morocco, which is one of the largest concentrated solar plants in the world.

It has produced over 814 GWh of clean energy since 2016 and last year, the solar plant prevented 217,000 tons of CO2 being emitted. Until recently, Morocco sourced 95% of its energy needs from external sources.

In South Africa, the Bank and its partner, the Climate Investment Funds, have helped fund the Sere Wind Farm – 46 wind turbines supplying 100 MW to the national power grid and expected to save 6 million tonnes of greenhouse gases over its 20-year expected life span. It is supplying 124,000 homes.

COP24 is the 24th conference of the Parties to the United Nations Framework Convention on Climate Change (UNFCCC). This year countries are preparing to implement the Paris Agreement, which aims to limit the world’s global warming to no more than 2C.