Shanghai Electric Group has awarded Nervión Industries, a subsidiary of the Amper Group, the construction of salt storage tanks for a solar thermal power plant in Dubai for 13 million dollars (about 11.77 million euros). 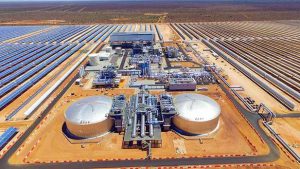 In a relevant fact referred to the National Securities Market Commission (CNMV), the company explains that the contract for direct execution has a term of 12 months.

The salt stores will be located in phase IV of the Mohammed bin Rashid Al Maktoum concentrating solar power park, the largest solar energy complex in the world. The park is owned by the authority of electricity and water (DEWA) and uses hybrid technology, with 250 MW of photovoltaic; a 100 MW solar thermal central tower (in which the tanks that Nervión will build will be located) and three other parabolic trough concentrating solar power plants of 200 MW each.

The company has indicated that with this contract its industrial subsidiary Nervión manages to «open a market with a new customer and in a new geographical area».

The contract has been well received by the financial markets. Amper shares rise more than 4% near noon, to 0.2735 euros. Since the beginning of the year, the titles are revalued by 14%.