FURNAS is developing, at its Technological Center for Civil Engineering, in Aparecida de Goiânia, Goiás, an unprecedented study in Brazil for the generation of electric energy from a heliotérmic solar system. The initiative is part of a Research, Development and Innovation project that has investments of R $ 7.5 million and aims to develop the first Brazilian solar thermal collector, which will allow the construction of a solar thermal plant to generate 1 MW of energy electric, enough to supply about 1,000 homes. 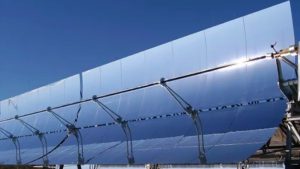 Thermosolar energy works from parabolic mirrors that reflect sunlight and concentrate it in a single point. The accumulated heat is used to heat a fluid and the steam drives the turbines, activating the generator, which will produce the electrical energy.

The project is developed by professionals from the Management of Services and Technological Support and Management of Research, Development and Technological Innovation. “In this first moment, we are going to develop a national collector for solar thermal generation (SCE), of the Cylinder-Parabolic channel type. With the tests, we will verify the feasibility of implementing this system on a large scale and commercialization to other companies in the sector. There is no such structure in Brazil for sale or installed, ”explains Renato Cabral, manager of the Technological Center for Civil Engineering at FURNAS.

The study is the result of a partnership between FURNAS and Eudora Energia and has the participation of Cepel. Eudora develops technology in the area of renewable energy and energy efficiency. A pioneer in the field of heli-thermal plants in Brazil, she was responsible for the design of solar thermal plants that will be implemented by Eletrosul and Cesp.

“The prototypes will be built between May and November 2021 and our expectation is that, at the beginning of next year, we will start the testing phase. This initiative represents an important step towards the development of this technology in the country ”, reinforces Moacir Andrade, engineer at FURNAS and coordinator of the R&D project.

Research, Development and Innovation in FURNAS

Over its 64 years of existence, FURNAS has become a reference in the Brazilian electric sector and one of the companies that invests the most in new technologies. The R&D projects regulated by Aneel, in compliance with Law 9.991 / 2000 and 10.848 / 2004, are part of this history, in the relentless search for innovative results that allow it to grow in a continuous and sustainable manner.

Today, the priority is the prospecting and monitoring of projects focused on sustainability and linked to new clean sources of electricity generation. The company monitors the procedures of the projects, with Aneel and the development agencies, the registration and monitoring of patents and the standardization of projects in accordance with the legislation in force.

However, the main objective is to transform the studies carried out into patented products or services and, with this, add competitive advantage.