Are plastic films the future for Concentrated Solar Power?

Are plastic films the future for Concentrated Solar Power?

HELIOtube is a highly innovative type of solar concentrator with plastic films as its key component. The results are significant advantages in capital expenditure and operating expenses. Therefore, the HELIOtube allows 55 % cost savings and significant reductions in CO2 emissions over the entire lifecycle compared to the most advanced glass mirror based parabolic trough technologies.

In the past, the supply of thermal energy by CSP has been economically feasible only for large plants. For small-scale applications the technology has been perceived as cost-ineffective. While the majority of solar power technology focuses on the generation of electricity, HELIOVIS, due to its cost-effectiveness, operates in the segment of thermal energy generation in which CSP has not yet been applied. Moreover, HELIOVIS sets itself apart from other players in the solar technology field by the scalable, transportable and modular design of the HELIOtube concentrators.

In contrast to pricely glass-mirror basesd parabolic trough technologies, the HELIOtube is considerably less expensive. This is achieved through the HELIOtube’s highly durable, flexible, lightweight and recyclable plastic material. HELIOtubes are produced roll-to-roll, thus reducing time consumed throughout the production line. Moreover, this allows transport by standard 40 foot containers to any desired destination. HELIOVIS technology offers significant competitive advantages in capital expenditure (CAPEX) as well as operating expenses (OPEX). HELIOtubes reduce the solar collector costs by about 55%. Therefore, HELIOtubes are the first leap in solving the CSP industry’s challenge of high costs, thus allowing it to even be competitive with fossil fuels.

Moreover, the HELIOtube technology aims at reducing complexity in CSP projects facilitating smart operational advances throughout the value chain. The HELIOtube’s transparent foil is Ethylene-Tetrafluoroethylene (ETFE), a durable material commonly used in modern architecture. ETFE allows reducing the use of precious fresh water in cleaning activities as sand and dust can be blown away with compressed air.

HELIOtubes do not require onsite production and complex construction processes. They are inflated with air at each designated site which reduces complexity and time consumed in installation. Its cylindrical shape is aerodynamically shaped and withstands very strong wind currents. The HELIOtube is designed to be replaceable in order to reduce downtime of loops to a minimum. Besides, used plastic films can be recycled ultimately increasing the sustainability factor.

Each HELIOtube is 220 meters in length and 9 meters in diameter. An output of 1 Megawatt of thermal energy is generated with every HELIOtube. Each HELIOtube is held in place by standard steel pillars and circles which are modular in design. Every circle is equipped with a motor, thus allowing the HELIOtube to rotate with high flexibility up to 340 degrees around its own axis. 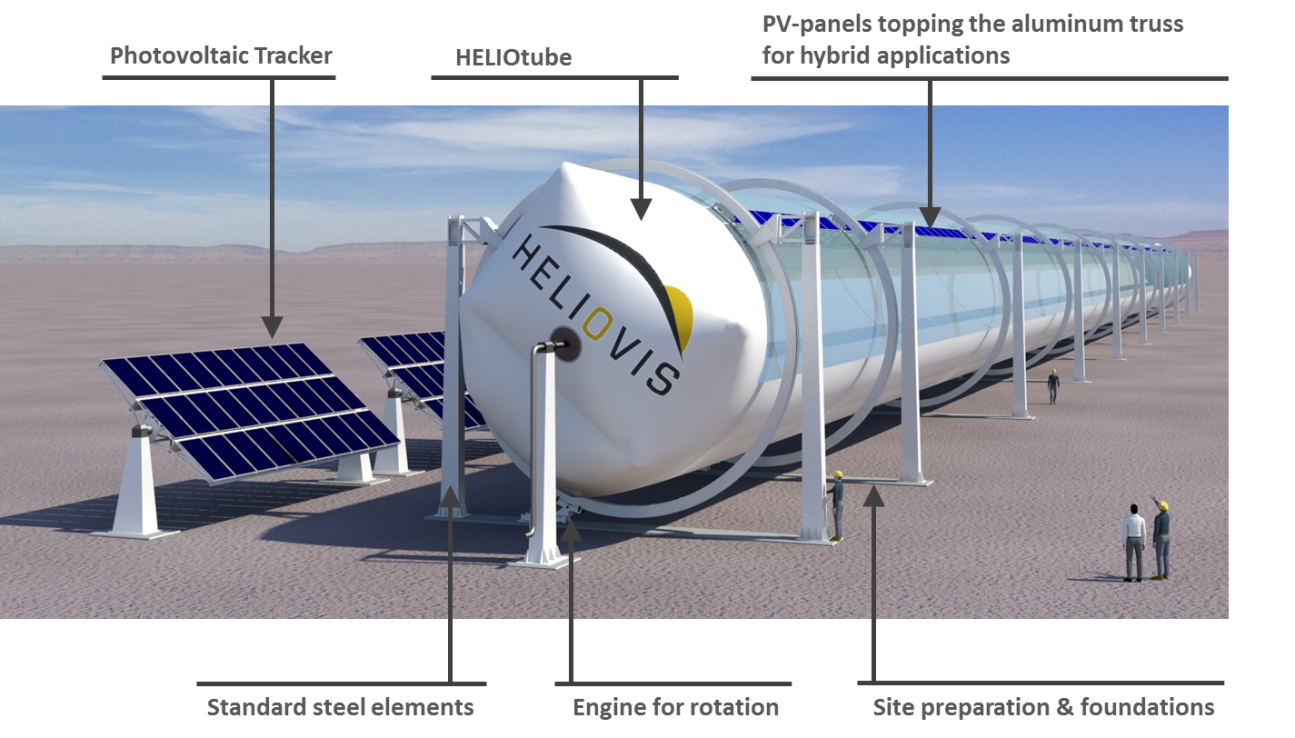 The HELIOtube Hybrid solution with innovative character in all details.

The innovation passed first pilot tests and is co-funded by the “Horizon 2020” Program of the European Union. The first industrial application is scheduled to be taken operational in fall 2016. 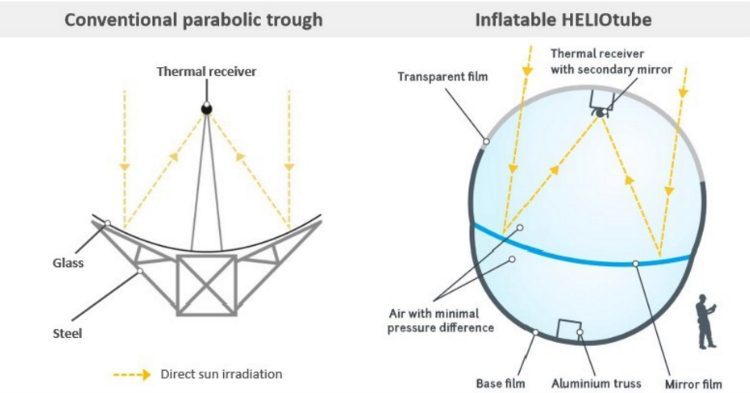 The HELIOtube technology is an inflatable cylindrical concentrator made of three plastic films, namely a base film, transparent film and mirror film. The mirror film divides the concentrator into two air-tight chambers running lengthwise through the tube. Small pressure differences between the top and bottom chambers arch the mirror film downward. Thus, a mirror channel is created that concentrates the incident solar radiation on a focus line in the upper chamber.

HELIOtube is a highly innovative type of solar concentrator with polymers as its key component. The results are significant advantages in capital expenditure (CAPEX) and operating expenses (OPEX). Therefore, the HELIOtube allows 55% cost savings and significant reductions in use of fresh water over the entire lifecycle compared to the most advanced glass-mirror based parabolic trough technologies.

Installation: Inflation instead of time-consuming assembly

Local content: up to 100% in the target market instead of factories in high-cost countries

Made-to-measure approach: The major advantage of HELIOVIS besides its savings in CAPEX and OPEX at all scales when compared to conventional Concentrated Solar Power (CSP) technologies is that it can also provide economically feasible plants for small-scale industrial use of thermal energy in the relevant markets.

Lightweight materials: Conventional CSP technologies use large quantities of steel and glass. As a result strong heavy foundations are needed. This excessive use of resources comes at a cost in production, transport as well as in future waste management. The HELIOtube is made of plastic films by a patented design creating a significant reduction of weight (e.g. 90% reduction compared to parabolic troughs), which results in lower transportation costs.

Innovative patented wind protection systems: The durability of the plastic films under the required conditions can be achieved through advanced wind and abrasion protection. Hence, besides weathering (i.e. UV, rain) of films, an innovative wind protection has been developed through long-term partnership of HELIOVIS and one of its partners.

Adjustable Mirror Surface: In order to focus the incoming sunlight onto the receiver the mirror film inside the HELIOtube is precisely curved. To achieve this HELIOtubes are designed to have two airtight chambers, which are separated by the mirror film. By creating a small difference in air pressure within these chambers, the mirror film is curved into the required shape.

Roll-to-Roll Mass Production: The HELIOtube is designed to be produced by a fully automated, low-cost, high-speed mass production system. The tubes are created by combining several layers of different polymers in our production process.

Multi-level Control System: The HELIOtube control system allows all HELIOtubes to automatically track the sun. Automatic rotation of each of the supportive rings adjusts each HELIOtube individually and in accordance to all other tubes – achieving optimal performance results in the whole system.

Installation process: HELIOtube solar fields are built in two successive steps: first the foundations, steel pillars and tracking rings are installed, followed by the installation of the thermal system e.g. receivers. In second step HELIOtubes are drawn into the rings through our patented draw-in mechanism. This innovative installation method saves a significant amount of time and labour costs compared to the parabolic troughs.

Sustainability: All conventional solar technologies suffer from the stigma of wasteful use of sweet water in dry areas where water is already overly scarce. HELIOVIS found a solution to this problem by reducing the exposure to pollution in the first place and applying a cleaning technique with compressed air that saves 80% of water consumption compared to cleaning conventional, glass-mirror based CSP plants.

Local Value Creation: The main weakness of CSP-related business models has been the lack of local value creation in the target markets. HELIOVIS’ intents on moving the operational part of the business, “Engineering, Procurement and Construction”, to regional Joint Ventures and local SPVs which entails local value creation of up to 90%.