A project that could lead to the use of solar thermal technology by Australia’s large industrial sector – and cut its reliance on fossil fuels in half – has been selected by the Australian Renewable Energy Agency in its latest round of funding.

Led by the University of Adelaide, the project will work with Australian aluminium giant Alcoa to evaluate the potential for using concentrating solar thermal technologies to generate the industrial process heat used in its alumina refineries in Australia and beyond.

The $15 million project – which ARENA chief Ivor Frischknecht has described as “essential” – was awarded a $4.5 million from the Agency, making it “the biggest project in the round by far.”

“This is about turning bauxite into alumina. It uses a huge amount of heat,” Frischknecht said at the ARENA funding announcement on Wednesday. “Aluminium refining and smelting is obviously big industry in Australia, so this is about exploring options that use solar thermal to generate that heat, as opposed to vast amounts of gas, or some plants use coal.”

Ultimately, the goal is to develop technologies to maintain continuous production through hybridisation with solar energy to reduce the use of fossil fuels by up to 45 per cent, cut emissions and hedge against increasingly volatile natural gas prices. 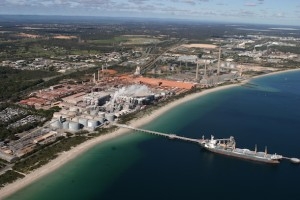 University of Adelaide project leader Gus Nathan told RenewEconomy that the project was important because it was one of the first to test the use of solar thermal in industrial heat generation, rather than the generation of electricity.

“Electricity is less than half the total energy needs in society, and there is currently no commercial demonstration of thermal energy – solar thermal – in the generation of industrial heat processing,” Nathan said.

In terms of potential fossil fuel energy displacement, he added, “this is actually bigger than electricity, so it’s important. …We’re targeting about 50 per cent renewable energy.”

Nathan said that while the actual project itself had not formally kicked off, the research and development team had been meeting with Alcoa to get the quoting underway. In the short term, the team hoped to deliver a funding submission for demonstration within two years.

If all goes to plan with the Alcoa project, the implications for industry could be huge, with applications for similar refininf processes including magnesia, zirconia and lime, said Nathan.

“Broadly,” he added, “the use of solar thermal is applicable to most chemical processes that use heat – steel, iron, glass, fuels – it’s a pathway to broader industry.”