The $2 billion Solana Generating Station, once it begins sending power to the grid in August, will be one of the largest concentrating solar power plants of its kind in the world.

Just off the highway that many Valley residents travel on their way to California, thousands of mirrors planted on 3 square miles of former farmland are about to change the solar landscape in Arizona.

The $2 billion Solana Generating Station, once it begins sending power to the grid in August, will be one of the largest concentrating solar power plants of its kind in the world. It won’t be unique in the amount of power it makes from the sun, but for what it generates after sunset.

Not only will the plant have a capacity of about 280 megawatts, enough to serve about 70,000 homes at once, but it will also be able to continue providing much of that power for six hours after sunset thanks to an innovative heat-storage system that doesn’t rely on expensive batteries.

The power it makes after dark is important in Arizona, where electricity use remains high into the early evening as people head home from work and crank up their air-conditioners.

The plant will represent a large portion of Arizona Public Service Co.’s renewable power supply. The utility is required to get 15 percent of its electricity from renewable sources such as solar power by 2025, and with the CSP plant’s contribution, APS will be well ahead of schedule. 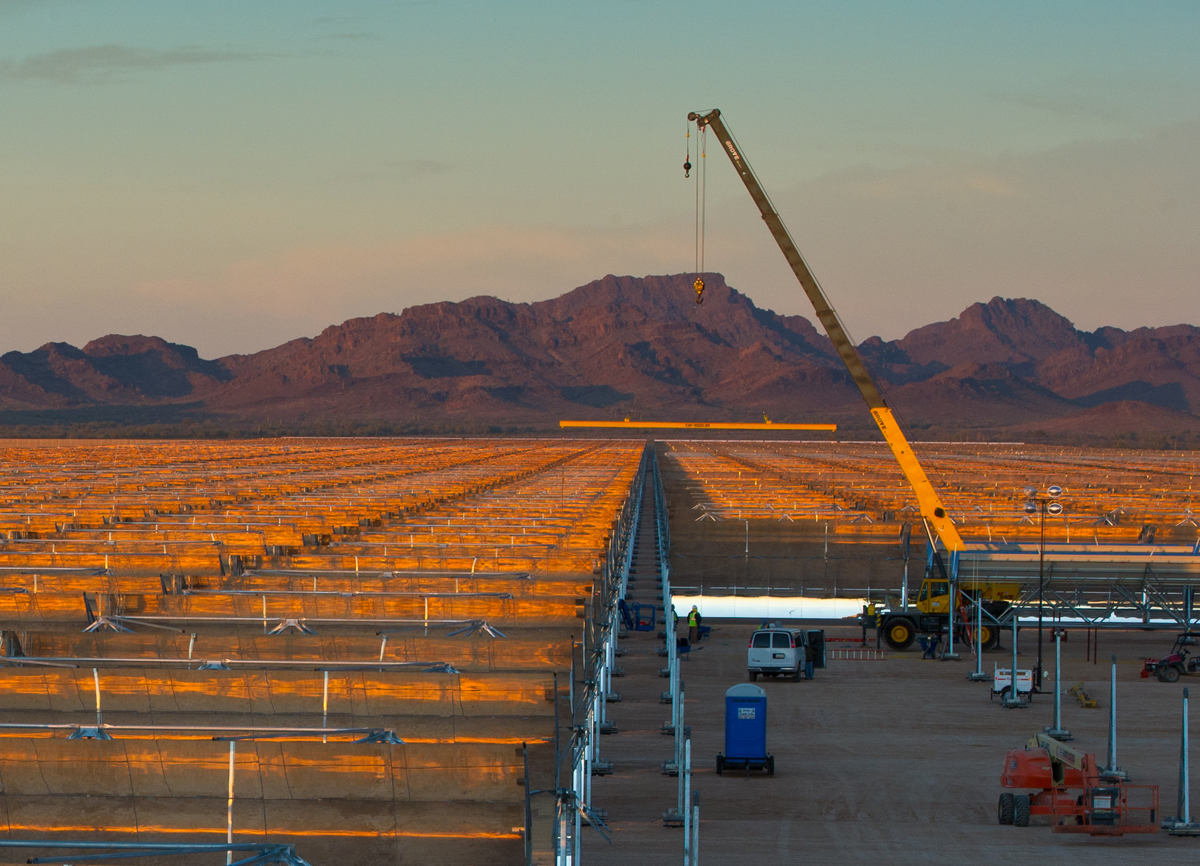 With Solana and a few other smaller solar-power plants that APS has in the works, the utility will get 12 percent of its electricity from renewable sources by 2016. It will then technically only need to get an additional 3 percent from renewables during the following nine years.

Solar-thermal power plants like Solana don’t use the common black solar panels that convert sunlight into electricity. They use mirrors to focus the sun’s heat and generate steam, which turns turbines, which then create electricity.

Solar-thermal, or concentrating solar power, plants function much like a natural-gas or coal-fired power plant, but they use sunlight in place of those fuels. At Solana, curved, troughlike mirrors built in Surprise will focus the sunlight on tubes of oil that will become superheated. The oil will not burn, but will be used to turn water into steam.

Some of the oil also is used to heat huge tanks of molten salt. The heat stored in the salt is used to continue making electricity after dark.

“Concentrating solar power has the flexibility to store and dispatch the power,” said Armando Zuluaga, director general of Abengoa Solar USA, the subsidiary of the Spanish company building the plant.

“Wind energy and photovoltaic solar are (price-) competitive, but those other renewables are intermittent,” he said.

APS officials said when they signed the agreement to buy power from Solana in 2008, the average price of power was about 14 cents per kilowatt-hour, or about 20 percent higher than power from natural-gas plants. The premium paid for solar from Solana goes up as gas prices fall and goes lower as gas prices rise.

Though Solana produces more expensive power, it has the advantage of being able to continue to provide power after sunset, something more traditional solar plants can’t do. And while building a new coal plant would cost about half as much as the new Solana facility, new coal plants come with many unknowns, including uncertainty regarding whether or not their carbon emissions will ever be taxed.

Zuluaga said Abengoa’s goal is to push the average price of electricity from its plants to 9 cents per kilowatt-hour by 2022. Most of that price reduction can be accomplished through a more competitive supply chain, he said. That only comes as more solar-thermal plants are built.

The $1.45 billion federal loan that Abengoa got for Solana is helping in that regard, he said.

“The purpose of that kind of program is to help to build up an alternative,” he said. “It has helped to build a whole industry in the U.S.”

He said that 75 percent of the equipment installed at Solana was manufactured in the U.S., which gives the technology an advantage over most solar projects that use traditional black solar panels, most of which are made overseas.

One of the few things Abengoa was not able to source domestically were the 120,000 metric tons of molten salt used at the site, which is shipped from Chile.

Most new solar projects planned today are using solar panels, though solar-thermal projects are growing, too.

Arizona has one, much smaller, solar-thermal power plant in Pinal County, which could only be considered a demonstration project compared with Solana. But other companies are building large solar-thermal plants in Nevada and California, and Arizona could see more built to serve California utilities.