At SolarPACES 2022, Heliogen talks up Solar Heat Efficiency for Mines

At SolarPACES 2022, Heliogen talks up Solar Heat Efficiency for Mines

The entire opening plenary of this year’s SolarPACES Conference focused on delivering solar heat directly to decarbonize industry. With 30% of global emissions emitted by fossil fuels to heat industrial processes; this need is well understood, but the emergency is now exacerbated by Europe’s very immediate need to replace gas from Russia. 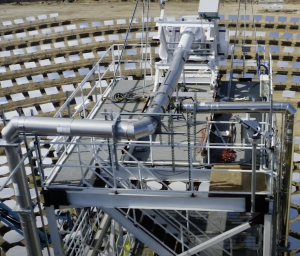 “What we’re doing with software on our heliostats is the way our human body works too. We don’t have stiffness in our arm but we have eyes and eyes allow us to put our fingers in a very exact place with feedback.” View from behind the receiver tower over the solar field of automated heliostats  IMAGE@Heliogen

“That’s why we had that whole panel on Industrial decarbonization,” he told me. “We talked a lot at SolarPaces this year about how heat is the big market for concentrated solar thermal now. Heavy industry needs heat 24/7 at between 150 °C and 1000 °C and concentrated solar thermal can deliver that entire temperature range, and do so around the clock. So industry doesn’t so much need PV to decarbonize; it needs much more CSP – CST.”

He noted that the more accurate term would be CST because the solar product is not power, but heat. Concentrated solar power (CSP) and concentrated solar thermal (CST) concentrate sunlight to generate heat that is then stored thermally. CSP then generates electricity from the solar heat in the same kind of thermal power block as used by coal or nuclear plants. But CST simply delivers solar heat directly.

This new focus marks a galvanizing moment for a heat-based solar technology, which as CSP has struggled for the grid value of its dispatchable generation to be appreciated by utilities, which remain satisfied with batteries to back up the intermittency of PV and wind.

“Utilities buy power at the lowest price possible; they are the lowest cost buyer, then mark it up to customers,” Gross noted, explaining the advantage of selling solar heat directly. “Utilities only need four hours of storage, but industry needs it 24 hours, and CST delivers that. So if you want to go after industry, that’s buying gas from the utility, you want to help them avoid that double markup.”

Plenary speakers also covered the policy now needed to jump start this new use of a solar technology that is ideally suited for decarbonizing industry heat use, but is not yet widely known. As a serial entrepreneur in climate tech with IdeaLab and CarbonCapture under his belt already, Gross focused more on what his latest company is already forging ahead with.

In 2021, Heliogen was selected by Rio Tinto to explore supplying direct solar heat 24/7 for their boron mine in California, with plans ultimately to supply its mines in Australia. Of all the heavy industries, mining has the biggest demand for thermal energy.

“A typical mining site might use 100 MW of electricity but it uses a gigawatt of heat; 10 or 20 times more heat than electricity,” said Gross.

Recalling Solar Reserve’s early attempts with Australian mines, he noted: “Times have changed, but also they weren’t selling the heat. They were just selling electricity. Both Rio Tinto, the mining company, and Woodside Energy, the natural gas company, want far more heat. And they want to make hydrogen too which also runs 24/7.” 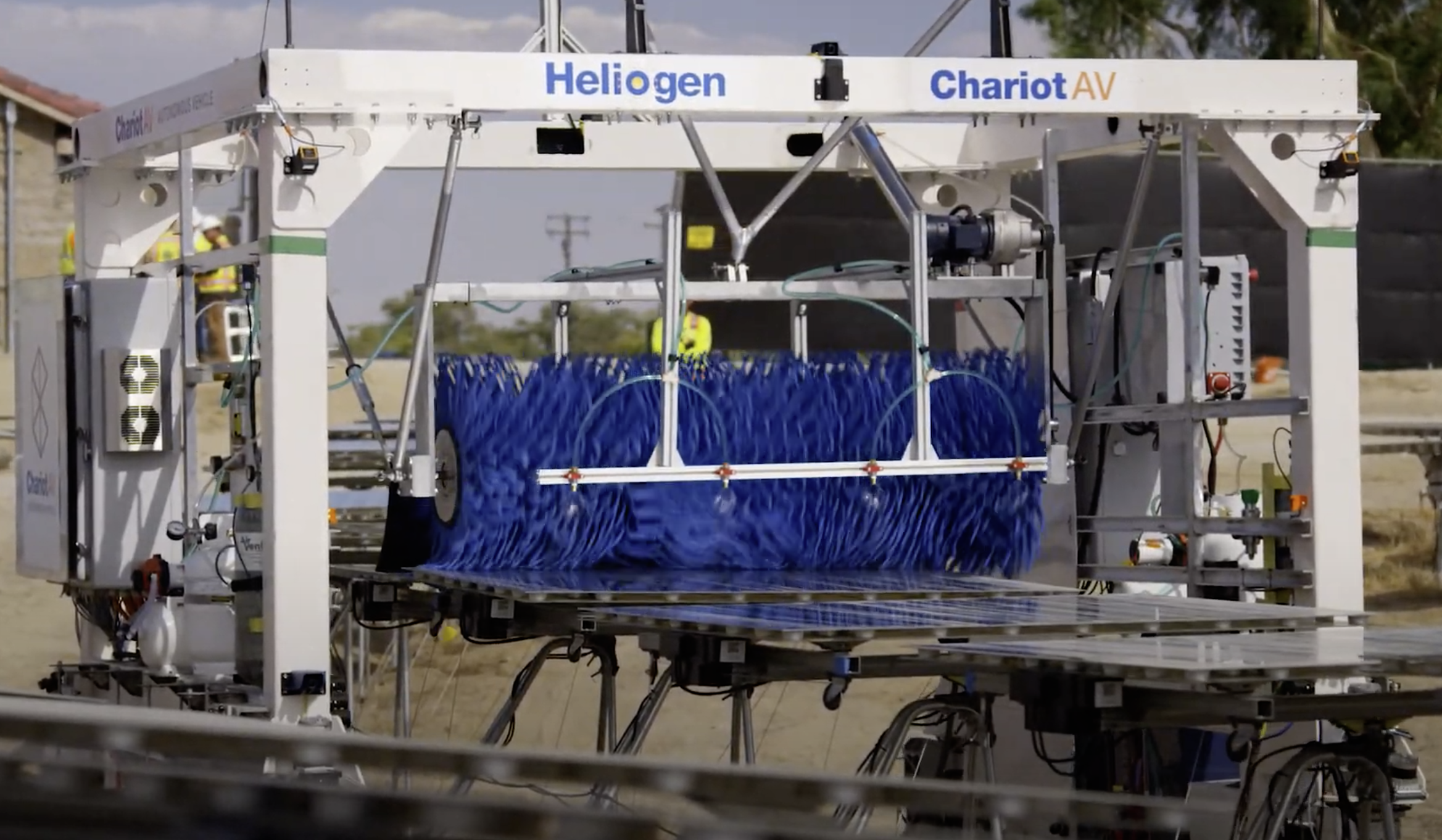 Heliogen’s cleaning robot cleans the rows of heliostats in 3 steps, first with ambient air, then dry dusted with a soft brush, and only if the camera detects dirt on the surface, such as bird droppings, then with water. IMAGE@Heliogen

The efficiency advantage of solar heat

The efficiency of solar heat means that CST plants are also much more compact than CSP plants. To deliver 100 MWth of heat, you’d use 8 Heliogen modules, requiring less than a square kilometer (0.87 sq km). By comparison, a 100 MWe CSP plant takes 7 or 8 square kilometers of land.

Heliogen is modular, depending on the temperature required. One unit takes only 2700 square meters of land and produces 12.5 MWth of saturated steam at up to 311 °C. Heliogen has demonstrated the ability to concentrate sunlight to temperatures exceeding 1000 °C, and is currently working on integrating these high temperatures into industrial processes.

Heliogen’s heliostats have evolved with experience, originally planned as octagonal, they are now square with the slight curve at the edge. This way they pack tighter for shipping from their factory and for ease in creating Heliogen’s autonomous cleaning module that cleans the rows of heliostats in 3 steps, first with ambient air, then dry dusted with a soft brush, and only if the camera detects dirt on the surface, such as bird droppings, then with water.

The big selling point of Heliogen is how it has been able to vastly reduce the cost of heliostat controls, with automation starting in the factory and continuing onsite, with constant automated calibration of the aim at the solar receiver on the tower.

The heliostats are mass produced with robotic welding and robotic controls in their 100,000 square foot California factory in Long Beach. It’s fully automated and can turn out the heliostats at scale like similarly sized PV panels, at a much lower price than for CSP projects previously where much larger custom heliostats tended to have to be produced onsite.

“The way we do it today would have cost $170 back then,” he said. “But now because the price of computing has gone down so much, now it’s basically free, and that’s the power of Moore’s law in reducing the price in the intervening years. We are more competitive now, not just us but concentrated solar in general.” 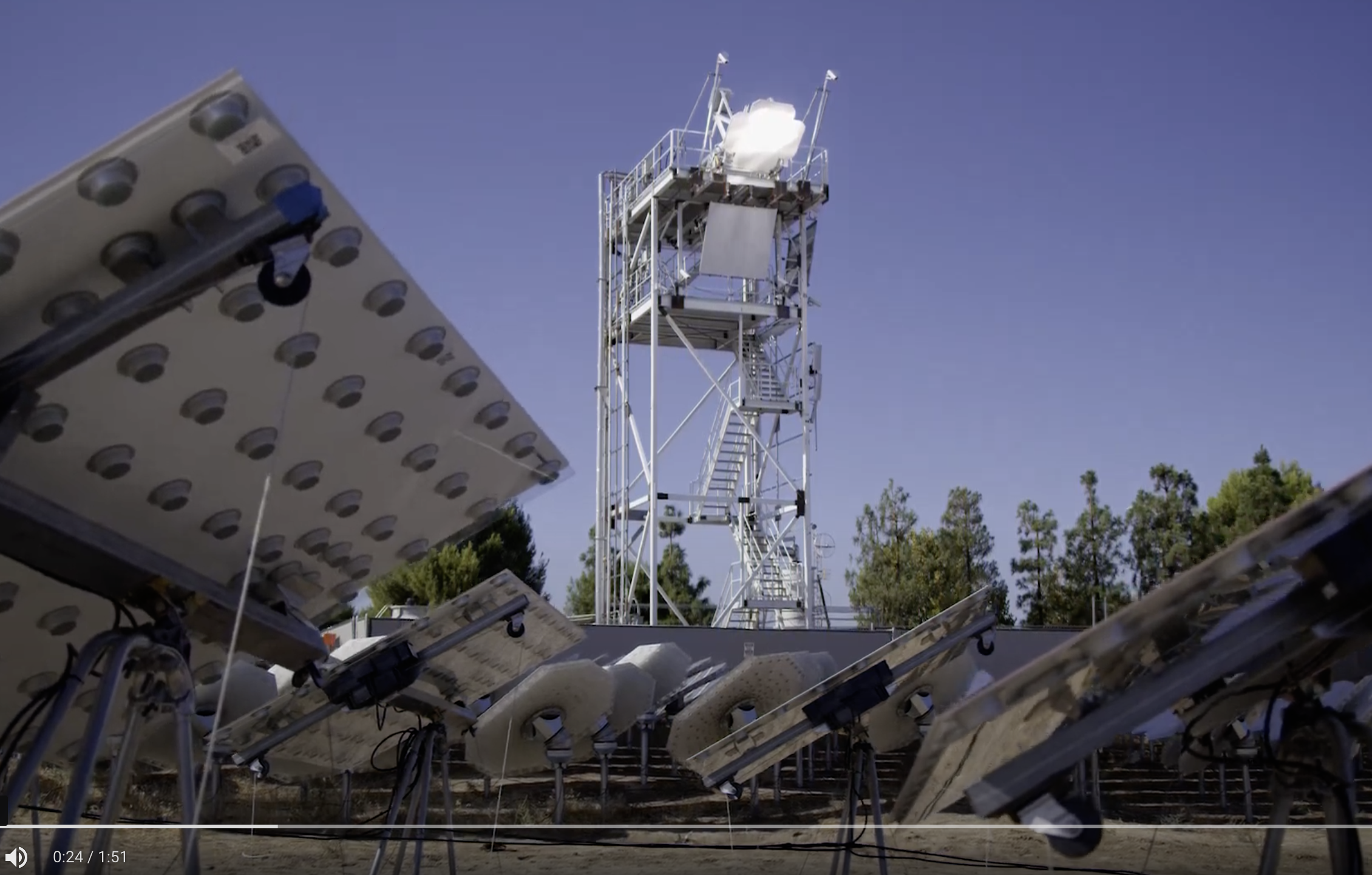 Keeping the reflected sunlight in each mirror always perfectly focused at the solar receiver on the tower as the sun continually moves through the sky comes from the use of AI. Gross likened their heliostats to lightweight robotic structures, with a resulting reduced use of steel. Heliostats must focus to a very precise spot, accurate to a thousandth of an inch. Traditionally, they had to be very strong and stiff.

“But if you instead make the robot arm light but put a camera on it, the robot arm can achieve the same thousands of an inch precision using feedback from a vision system,” he said.

“What we’re doing with software on our heliostats is the way our human body works too. We don’t have stiffness in our arm but we have eyes and eyes allow us to put our fingers in a very exact place with feedback.”