Solar thermal technology is perfect for Australian conditions, according to Currie, former global head of energy at legal firm Norton Rose Fulbright. He says CSP can stabilise the grid in a similar way to the Snowy 2.0 pumped hydro project in NSW.

The failure of the Aurora project is a blow to South Australia’s emerging solar thermal industry. It has also struggled to compete with the rapid growth and falling costs of residential and commercial solar panel systems. 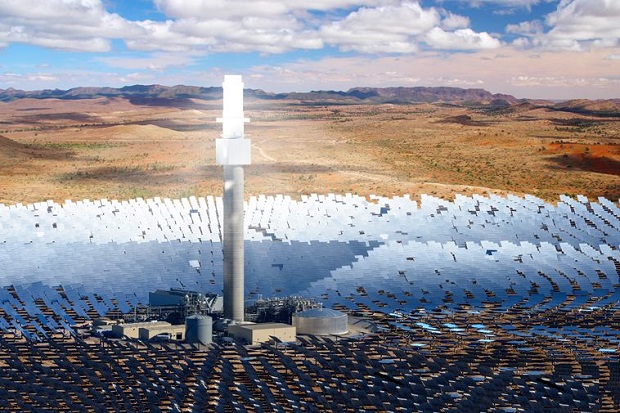 An artist’s impression shows the sheer scale of the failed Aurora CSP project in South Australia.

Aurora attracted $110 million in funding from the Turnbull Government. It also had 20-year supply contract with the SA government. However, it was unable to meet the deadline for final funding.

The project should have been online by 2020. It was supposed to supply clean energy to the state at $78 MWh, below the state’s average wholesale prices.

As reported in the Australian Financial Review, the International Renewable Energy Agency (IRENA) says Concentrated Solar Power will attract $US1,900 billion of investment worldwide by 2050.

Solar thermal technology thus overcomes the intermittency of solar power without using energy storage batteries or gas back up generators.