AUSTELA commissioned IT Power Australia to lead the project and work with NREL researchers. 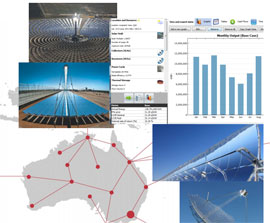 "Concentrating solar thermal systems have the potential to play a significant role in future electricity networks as they can store energy, which means clean energy can be dispatched to homes and businesses at anytime of the day or night," Minister Gray said.

"Through ARENA, the Government is investing in technologies and projects that will increase the use of renewable energy in Australia. These new tools – which will optimize an industry-leading United States model for Australian conditions – will make it easier for developers and financiers to assess the commercial viability of concentrating solar thermal projects."

The System Advisor Model (SAM) was developed by the US Department of Energy’s National Renewable Energy Laboratory (NREL) and adapted for Australian conditions by the Australian Solar Thermal Energy Association (AUSTELA) through a USD 73,500 ARENA investment.

It provides information that can help a developer make an assessment of a proposed site’s suitability, the economic performance of the system and the financial viability of the project.

"This type of analysis is critical to attracting investors and will help pave the way for the energy industry and the finance sector to deploy concentrating solar thermal technologies in Australia," Gray said.

AUSTELA commissioned IT Power Australia to lead the project and work with NREL researchers to adapt the internationally recognized SAM to suit Australian market and weather conditions.

Researchers, developers and financiers are encouraged to access the free, Australian-optimized data and user guide which can be used with NREL’s SAM via http://www.austela.com.au/sam.