Researchers from Sandia National Laboratories recently used 22-foot-wide tethered balloons to collect samples of airborne dust particles to ensure the safety of an emerging solar-power technology. The study determined that the dust created by the new technology is far below hazardous levels, said Cliff Ho, the lead researcher on the project. Ho’s team just received $25 million from the Department of Energy to build a pilot plant that will incorporate this technology.

This next-generation renewable energy technology is called a high-temperature, falling-particle receiver for concentrating solar power. Concentrating solar power, while not as common as solar panels or wind turbines, has several advantages over those renewable energy sources, including the ability to store energy in the form of heat before converting it into electricity for the power grid. 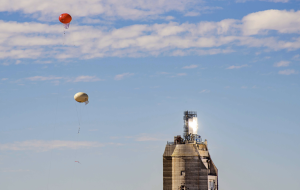 The falling-particle receiver works by dropping dark, sand-like ceramic particles through a beam of concentrated sunlight, then storing the heated particles. These round particles cost about $1 for 2.2 pounds and can get a lot hotter than conventional molten-salt-based concentrating solar power systems, which increases efficiency and drives down cost. The Sandia team also evaluated other particles like sand, which costs only a few cents per pound, but they determined that due to the ceramic particles’ ability to absorb more solar energy and provide smoother flow, ceramic particles were the best way to go. The Department of Energy’s goal is to get the cost of electricity from concentrating solar power down to five cents per kilowatt hour, comparable to conventional fossil-fuel-based power.

However, the re-used particles can eventually break down into fine dust. The Environmental Protection Agency and the Occupational Safety and Health Administration regulates tiny dust particles, finer than talcum powder, that are known to pose a risk for lung damage.

“The motivation for doing the particle sampling was to make sure that this new technology for renewable energy wasn’t creating any environmental- or worker-safety issues,” Ho said. “There are particles being emitted from the falling-particle receiver, but the amounts are well below the standards set by the EPA and National Institute for Occupational Safety and Health.”

Dari Dexheimer, Sandia National Laboratories’ tethered-balloon expert, and her team prepare the 22-foot-wide, tethered, helium balloons for launch on a gorgeous fall morning. (Photo by Randy Montoya) Click on the thumbnail for a high-resolution image.

Last fall, the research team used sensors sitting a few yards away from the falling-particle receiver on the platform of the solar tower, or National Solar Thermal Test Facility, and sensors hanging from 22-foot-wide, tethered, helium balloons to measure the particles that were released as it was operating at temperatures above 1,300 degrees Fahrenheit.

The balloons and their tethers were outfitted with a variety of sensors to count the number of dust particles in the air around them, as well as their altitude and precise location. The tethered balloons stayed at their specified altitude for three hours, allowing the team to collect a lot of data. They also operated a small remote-controlled balloon that was far more mobile in terms of altitude and position, Dexheimer said.

“That allowed us to collect data every second for three hours over the entire area,” said Dexheimer, who generally flies tethered balloons over northern Alaska to collect data for Arctic climate monitoring and modeling. “Since we got the data in real time, we could move the tethered balloons in order to measure in the highest intensity region of the plume, identify where the plume edges were or track the whole movement of the plume with time.”

The team also placed a variety of sensors on the solar tower platform, mere yards from the falling-particle receiver. These sensors could count the number of dust particles as well as determine their size and characteristics.

Andres Sanchez, a Sandia expert on measuring fine particles suspended in air, led these tests as well as similar tests two years ago, together with his colleague Andrew Glen.

For the most recent tests, the researchers constructed special see-saw-like tipping bucket collectors to measure both the amount of particles and their sizes. Somewhat like a tipping bucket rain gauge, particles in the air would go down a funnel and land on the see-saw-like platform. Once a certain weight of dust particles built up on the platform, it would tip over and send an electrical signal to the researchers. The number of tipping signals in a certain amount of time told the researchers the frequency of particle-emission events, and after the test they could weigh the particles in the bottom of the buckets to determine the collected amount.

Three tethered balloons were deployed both upwind and downwind of Sandia National Laboratories’ National Solar Thermal Test Facility during a falling-particle receiver test. The team, led by Cliff Ho, found that the concentration of tiny particles, finer than talcum powder, that escape from the receiver were much lower than Environmental Protection Agency limits. (Photo by Randy Montoya) Click on the thumbnail for a high-resolution image.

Comparing the results from sensors close to the falling-particle receiver and those further away on the balloons, they found that the concentration of tiny particles, finer than talcum powder, was much lower than EPA limits.

“We did some computer modeling using the EPA’s particle dispersion model,” Ho said. “Basically, it would take an emission of particles 400 times greater than what we found in previous tests to start to get close to the EPA standards. Based on our measurements and models, I don’t foresee any conditions where we’re really hitting those thresholds.”

This stair-like system slows dark, sand-like ceramic particles as they fall through a beam of concentrated sunlight. The stair-like system reduces the impact of wind on the falling particles, mitigating the release of fine dust that can pose health hazards. (Video courtesy of Jin-Soo Kim, Commonwealth Scientific and Industrial Research Organization of Australia) Click to view a video of the stair in action.

From the tests, and the computer modeling simulations, the team was able to develop several different methods to reduce the emission of fine dust particles. First, they optimized the shape and geometry of the falling-particle receiver to reduce particle loss, Ho said. They developed a stair-like system that slows the particles in the receiver as they fall and a “snout” that helps mitigate the impacts of wind on the falling particles.

They also explored and eventually discarded two other ideas. One was to have a window over the falling particles, because it would get too hot from the concentrated sunlight and was not easy to scale up to large sizes. The other was to protect the particles with an air curtain, like those used at store entrances to keep the hot or cool air inside the store.

Ho and his team just received funding to build a pilot falling-particle receiver plant that will incorporate the improvements developed from these tests.

“I normally focus on atmospheric measurements and modeling how the atmosphere would respond if carbon dioxide emissions are reduced by a particular amount,” Dexheimer said. “With this work, I was able to take part in the active reduction of those emissions. I think we’ve all really enjoyed seeing the other side of the coin, figuring out how to make renewable energy more efficient and more feasible.”