Normally, power tower CSP heats molten salts by aiming concentrated sunlight up to a receiver on a tower that has molten salts flowing through pipes in the receiver to be heated and sent down the tower to store the sun’s energy as heat in a hot tank below. 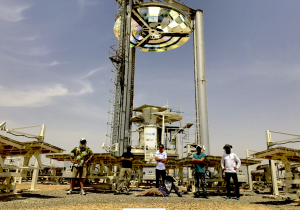 But what if the molten salts in the thermal energy storage tank could simply be heated directly by concentrated solar flux?

A 2021 paper Dispatchable solar power using molten salt directly irradiated from above describes the first on-sun outdoors trial of such a setup at a scale of 600 kWh at the Khalifa University Masdar Institute Solar Platform testing site. A bath of molten salts sits on the ground, and concentrated sunlight is beamed up to an inverted mirror above the tank, and then reflected down into the molten salts bath on the ground.

This reversed setup which combines collection and storage has many thermal efficiency advantages. It is much more convenient to install and maintain and operate because the receiver is not at the top of 140 meter high tower; it’s on the ground.

“You save all the pumping energy. You don’t have to move the salt to the top of a tower, because instead of moving the salt, you move the light,” commented Dr. Nicolas Calvet, lead author of the study.

Also, because the material absorbing the heat is the deep vat of clear liquid, there is also no risk of a hot spot like there is on a tower receiver from getting too much solar flux focused on the metal receiver piping.

“In the tower you also have more constraints in the starting procedure. You need to drain the receiver every night so you don’t crystallize the salt as it cools overnight in the pipe,” he explained. This adds extra shut down time in the evening and startup time in the morning.

“But at night in our case, we just close the tank with a lid and that’s it. And in the morning you just open the tank and concentrate the full light without any precaution, because there’s no thermal shock due to metal cooling.”

The on-the-ground orientation allows for a further thermal efficiency measure. In many CSP labs testing thermochemical solar reactors, a quartz window closes the reactor to reduce thermal loss, but the heat can break the glass in case of hot spots due to dust for example, according to Calvet. But to keep the heat in, since the tank of molten salts is on the ground, instead the team was able to simply float clear glass spheres on the surface to insulate.

And to even further reduce thermal losses from radiation, an optical cone-shaped funnel further concentrates the already twice-reflected sunlight as it enters the tank, and reflects thermal radiation back into the liquid, so the aperture is smaller than the tank diameter.

Another “first” this trial published is a test of thermocline storage with a divider plate. Thermocline storage, where the hot liquid is on top of the cold in a single tank is increasingly investigated as a cost cutting measure in CSP, because it reduces cost. In the conventional tower you have the cold salts tank and the hot salts tank and yet really only one volume of tank is ever in use because the molten salts are always flowing in and out between the two tanks as they are heated by the sun and cooled once their heat is extracted.

However, storing both temperatures in a single tank means you need to reduce as much as possible the thermocline, the area of mixed temperatures in the middle. Calvet’s team adapted a divider idea SENER had tested (though for thermal storage alone) to keep the two temperatures physically separated.

A metal divider plate would start at the top of the tank in the morning and lower all day as the sun heats from the top down; while underneath, the spent cold layer returned from the power block is being warmed up again by coming in the gap between the wall side and the end of the divider plate and mixing with the hot salt.

(Though, if used to provide solar power at night only, the divider plate is not needed, as the entire volume would be heated in eight hours of sun ready for use as darkness falls.)

The team also found a mixing plate homogenizing the hot layer on top of the divider helpful. This recirculates the heated portion on top as it increases in volume to reach the molten salt at deeper depth. 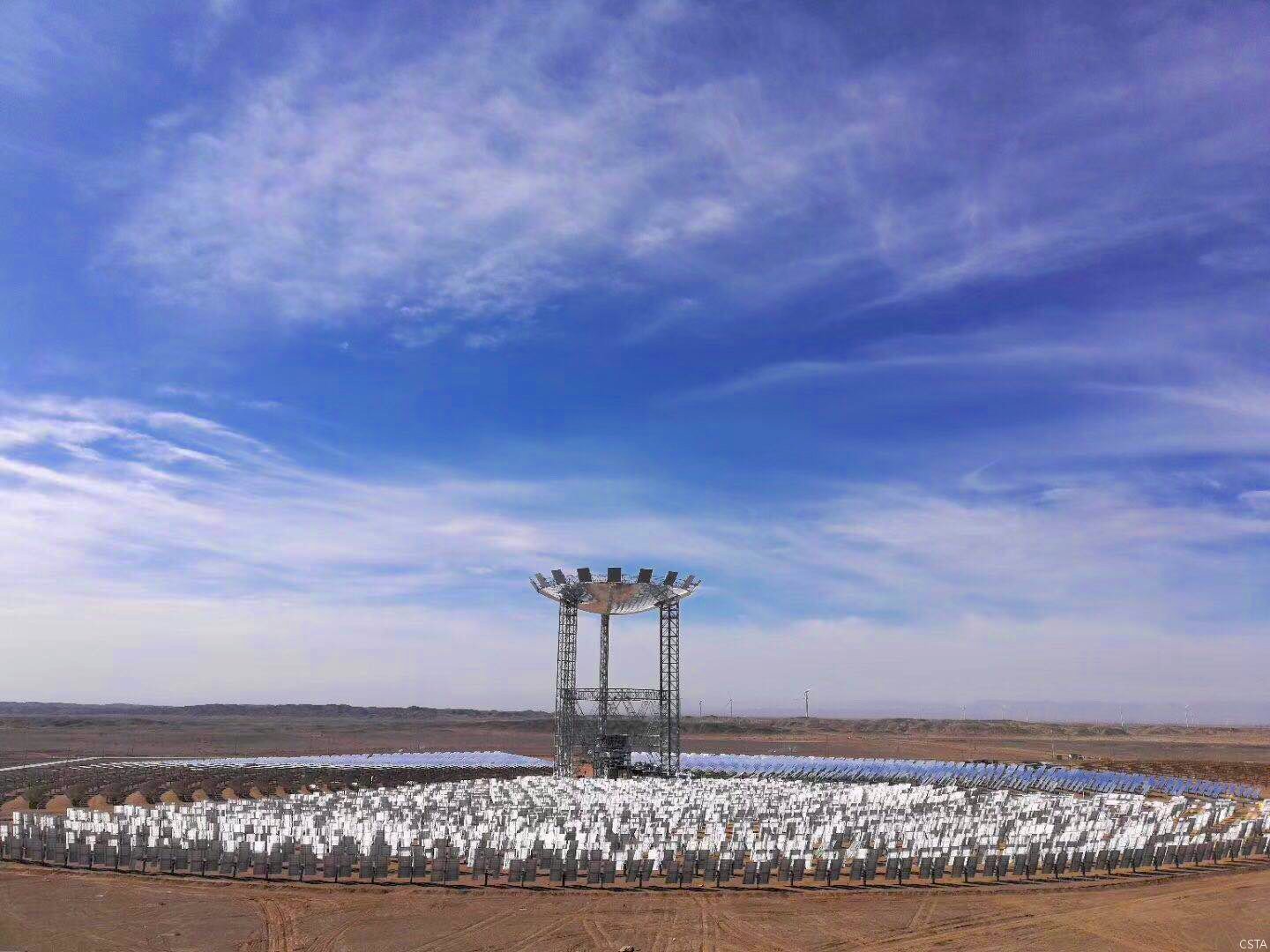 He came up with the idea to test beam down for directly irradiated storage, together with his colleague Professor Peter Armstrong, when he was hired as a professor in the mechanical engineering department at Masdar Institute (MI, later merged with Khalifa University) in the UAE.

There he founded the Masdar Institute Solar Platform (MISP), which already had a semi-abandoned test beam down tower that had been set up by Masdar and a Japanese consortium in 2009, along with a very small 33-heliostat solar field – 280 sq m of mirror.

“So I started to look for things we could do with a beam down application. These are very interesting because you could think about, for example, melting metals with the sun to replace electricity and fuels. That was our initial idea because you can imagine a tank on the ground to contain something liquid in the tank and the light coming from the top.”

Ultimately, Armstrong and Calvet settled on using the beam down to test directly heating the volume of the thermal energy storage, after Armstrong recommended a paper from Professor Alexander Slocum at MIT; Concentrated solar power on demand, that tested direct absorption solar receiver/storage successfully using a solar simulator, but very small scale, with just 7 litres of molten salt.

So Calvet contacted Slocum and proposed the joint MIT/MI collaboration to upscale the idea from seven liters to four tons of molten salts, using the existing beam down setup, and this became the CSPond Demo, one of the MIT/MI Flagship programs.

However, the old test solar field of just 33 heliostats from 2009 was comprised of what he characterized as “damaged bathroom mirror.”

“Imagine if you put a bathroom mirror in the desert with UV and that corrosive environment! They were already degraded by 2013; they were supposed to dismantle it in 2011. I think the Japanese wanted to save money on the project,” he remarked.

Calvet has now been able to order state-of-the-art heliostat mirrors from Rioglass, and is confident that with a real solar field, the molten salts will reach the temperature needed to run a power block efficiently.

Conventional nitrate molten salts have a limit of 600°C to avoid degradation, but Calvet noted that like tower, beam down CSP could also reach much higher temperatures with new thermal storage materials.

Some high temperature storage materials now being investigated in ground-level tanks for beam down with direct storage include rocks and hot air or particles such as desert sand. For high temperature industrial processes, there is an advantage to working at ground level.

These higher temperature thermal storage materials are now being piloted, that can run at up to 1250°C for cutting edge solar thermochemical processes like manufacturing solar fuels like hydrogen and aviation fuel.

“But next we need a demonstrator. We are in “the Death Valley;” Calvet commented.

“We have a proof of concept here but it’s very small; 600 kWh electric; 100 kWhth. We would need to do a two to three megawatts electric demonstrator that would cost several million, maybe five million dollars. So we would need somebody to invest five million dollars into a large-scale system in order to be viable commercially.”

But that role in a startup would not be his: “I’m a professor. I’m not a business developer. So my role is to demonstrate that it’s working; which we now did with this proof of concept.”