The loan office provides access to $40 billion of funds and Jigar Shah, founder of SunEdison and a specialist in low carbon investment, has been appointed as office director. The office was created under the George W Bush administration but issued most of its loans under the Obama administration. 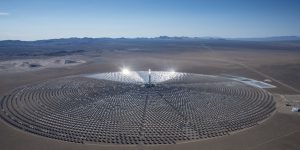 Developed by California’s SolarReserve, the 110 MW Crescent Dunes of plant in Nevada was the first large-scale solar tower project with molten salt storage. The plant was plagued with faults and was taken off the grid. Last year, plant owner Tonopah Solar Energy filed for bankruptcy protection.

Owned by NextEra Energy, the 250 MW Genesis plant is based on parabolic trough technology and supplies power to Pacific Gas and Electric (PG&E).