Ilanga CSP1 is a truly transformation project that was conceived and developed by a 100% black developer (Emvelo). Its two top executives (CEO & CFO) are black females, two-thirds of its board members are black and its chairman is black.

The 100 MW Concentrated Solar Power (CSP) Station has been conceived as an integrated infrastructure project with a lasting socio-economic impact in the Karoshoek Solar Valley area, Upington.

• 93% of its staff directly employed to operate and maintain the plant during the first 3 years are South Africans, 50% of whom are from the local community within the 50km radius of the plant. 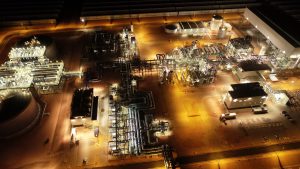 The 100 MW plant uses Sener’s parabolic trough technology to generate renewable, sustainable and dispatchable power from the sun. According to Pancho Ndebele, founder of Emvelo and developer of the project “Ilanga CSP1 is a flexible power plant and has been designed to operate as a semi peaking power station during the day time and up to 5 hours at full load after sunset. Night time electricity generation is achieved with a molten salt energy storage facility”. 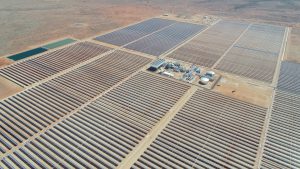 Ndebele added, “the completion of Ilanga CSP1 demonstrates that Black Industrialists and entrepreneurs can conceive and lead the development of large renewable energy infrastructure projects in South Africa and beyond”.

Now that the plant is operational, the plant will produce clean energy to serve around 100,000 South African households, the plant will displace over 340,000 tonnes of carbon dioxide each year. In preparation for the Operations and Maintenance (O&M) phase, IIanga CSP1’s O&M Operator (Seratype O&M) whose consortium partners are Cobra Energia, Sener and Emvelo identified and selected 50 candidates, mostly youth within the 50km radius of the site, Dawid Kruiper Municipality, ZF Mgcawu District Municipality to attend the first CSP Operations and Maintenance training course in Upington.

The selected youth trainees attended and completed a 200 hour long program. The course consisted of 14 theory modules, as well as practical visits to the Ilanga CSP1 plant to familiarize trainees with the day-to-day operation of CSP power stations. Upon completion, 22 of the youth trainees were offered employment as part of Seratype O&M. At the graduation ceremony of the youth trainees, Sylvia Lucas, Premier of the Northern Cape Province, stated that “langa CSP1 is the first and only CSP project that was conceived and developed by a 100% black owned South African developer. The O&M training for our youth provided by the Ilanga CSP1 partners is a first in the REIPPPP and is in line with government’s four accords, emanating from the New Growth Path (NGP); namely basic education, skills development, local procurement and the green economy. The Northern Cape has identified all renewable energy technologies including CSP as key in unlocking job opportunities for our youth, women and the transformation of our economy.”

The attainment of COD certifies the plant’s correct operation following commissioning and testing and has been handed over to the owner, Karoshoek Solar One, a consortium consisting of Emvelo, PIC, IDC, Karoshoek SDI Trust, Grazigystix and HCI. Tshepo Rachidi, chairman of Karoshoek Solar One said, “Ilanga CSP1 ticks all the boxes in terms of proactive black economic transformation, developed by a Black IPP Emvelo, its two top executives are black females, CEO Niroshma Chetty and CFO Zandi Nkone and two-thirds of its board members are black and is 80% South African owned”.

The collaboration in the construction of the project by the Dankocom EPC partners has created a platform to build similar projects at the 1000 MW Karoshoek Solar Valley Park, which already houses Ilanga CSP1 and has a pipeline of four future Ilangas; CSP2, CSP3, CSP4 and Tower 1 that are shovel ready with a combined capacity of 550 MW.

“With CSP activities at Karoshoek Solar Valley, we are mobilizing investment locally and internationally to contribute to the President’s economic drive and in doing so we hope to create a solar generation of present and future youth workers and for the Northern Cape to become the global hub for the deployment and industrialization of CSP components.” said Ndebele.

Emvelo is an African green economy company with interests in the development, construction, management, operation and maintenance of renewable energy and green infrastructure assets that contribute towards sustainable socio-economic development, poverty alleviation and job creation. In 2009, Emvelo conceived and led the development of its flagship 100 MW Concentrated Solar Power Station (Ilanga CSP1) that uses the parabolic trough technology. It is the developer of Ilanga CSP2, CSP3, CSP4 and Tower 1, that are shovel ready with a combined capacity of 550MW.