The California Energy Commission said in a release late on Friday that its staff had found the solar project, estimated to cost $2 billion, would comply with all applicable laws, ordinances, regulation and standards and the environmental impacts would be less than significant.

The staff, however, said some issues still needed to be resolved, including geology and paleontology, soil and surface water, traffic and transportation, transmission system engineering, water supply and visual resources.

The staff’s preliminary report is not a final decision, which the commission said would come later. If the project is approved, BrightSource said on its website it hopes to start construction in 2013 with completion in 2016. The project would power about 200,000 homes.

The company has agreed to sell power from Rio Mesa to Southern California Edison (SCE), a unit of California power company Edison International.

BrightSource told the commission the project would average 840 workers a month during construction, with a maximum of 2,188 at the peak, with up to 100 full-time employees needed when the project is operating.

The proposed Rio Mesa project consists of two 250-MW solar plants, producing steam to generate electricity. Each plant would have about 85,000 heliostats – elevated mirrors used to focus the sun’s rays on a solar receiver.

The solar receiver is located atop a 750-foot (230-meter) power tower near the center of each solar field. BrightSource wants to build Rio Mesa on Palo Verde Mesa in Riverside County, about 13 miles (21 km) southwest of Blythe, California, which is 224 miles east of Los Angeles.

The proposed 3,805-acre (1,540-hectare) site would be located on land leased from the Metropolitan Water District of Southern California. 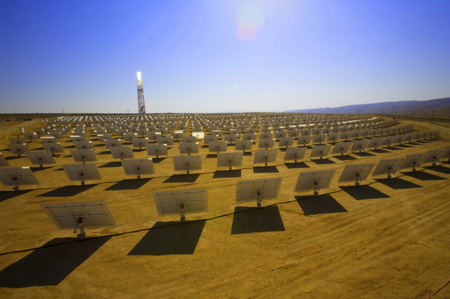 BrightSource originally asked the commission in October 2011 for permission to build a 750-MW project on about 5,750 acres. But in July 2012, the company amended its application to remove the 250-MW plant that would have been on Bureau of Land Management (BLM) land due in part to concerns raised by the BLM.

Separately, BrightSource started building the 370-MW Ivanpah solar power plant in California’s Mojave Desert in October 2010 and will sell the power to PG&E Corp and Southern California Edison. The company expects Ivanpah to cost about $2.2 billion and enter service in 2013. 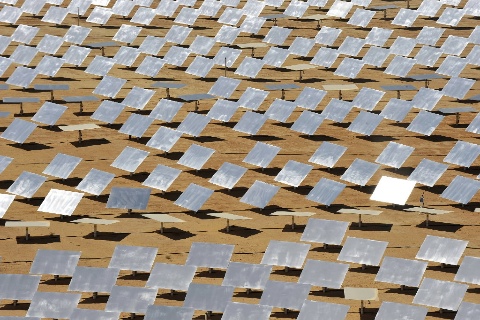 In addition, BrightSource is developing the 500-MW Hidden Hills solar power plant in southeast California near the Nevada border and will sell power to PG&E. The company expects Hidden Hills to cost about $2.7 billion and start construction in 2013 with the plant entering service in 2015.