A large-scale concentrated solar power (CSP) project to be located east of the Coachella Valley won an open-ended reprieve from the California Energy Commission, which had been heading toward denying it a permit.

A large-scale concentrated solar power (CSP) project to be located east of the Coachella Valley won an open-ended reprieve on Tuesday from the California Energy Commission, which had been heading toward denying it a permit.

An agency committee meeting in Sacramento granted BrightSource Energy’s request that it be allowed additional time to gather information that could change the proposed denial of its 500-megawatt Palen Concentrating Solar Power project.

If approved, the concentrated solar thermal power project could put two 750-foot-tall solar towers surrounded by thousands of reflecting mirrors on public land off Interstate 10, about 60 miles east of Indio.

Commissioner Karen Douglas issued the proposed denial on Dec. 13, concluding that the project’s benefits would not outweigh its visual impacts on tribal trails and sacred sites in the region or the unknown number of potential bird deaths that might be caused by the intense radiation from its mirrors.

But in a long opening statement, Douglas said that her December decision should not be taken as “a sweeping statement on technologies.”

“The fact that the proposed project has a potential for greater impacts than projects using photovoltaic or solar thermal troughs creates a hurdle for the petitioner, but it’s not a hurdle that is impossible to overcome,” she said.

Douglas also outlined the kind of additional information or project changes that might sway her and the commission to approve Palen, such as adding storage capacity to the project, which would allow it to pump power even after sundown. Working with tribal groups to come up with meaningful mitigation measures for the towers’ impacts on tribal sites was another key point. 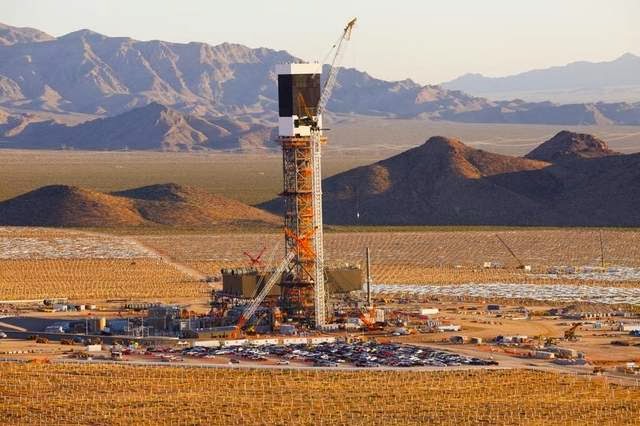 Oakland-based BrightSource had submitted its request for more time on Dec. 23, saying it would gather additional information on bird mortality at its Ivanpah project, a 377-megawatt plant with three solar towers in east San Bernardino County.The discovery of dozens of dead birds with singed or scorched feathers at Ivanpah last year had added to the concerns environmental groups had raised about Palen during two days of public hearings in Palm Desert in October.

The birds at Ivanpah may have been injured while flying through the project, where sunlight reflected from the mirrors superheats liquid in boilers at the top of the towers, creating steam that is used to power turbines. Bird deaths are also being found at projects using solar troughs or photovoltaic panels.

Scott Galati, BrightSource’s attorney, did not provide specifics of the additional information the company might submit or a timeline for when it might be ready for the commission to reconsider the project. The company will submit monthly progress reports to the commission, he said.

Environmental and tribal groups that welcomed Douglas’ proposed denial in December were opposed to granting BrightSource additional time, arguing the project is being given special treatment.

“It appears that the commission is asking the petitioner to provide additional data,” said Lisa Belenky, senior attorney with the Center for Biological Diversity. “But all parties should have the ability to submit new data and also to answer new data and rebut that.”

Both Belenky and Kevin Emmerich of Basin and Range Watch, a grassroots environmental group, said one or more years of bird data from Ivanpah should be collected before any decision on Palen.

Sara Clark, an attorney for the Colorado River Indian Tribes, said Palen’s cultural impacts in and of themselves should be enough to scuttle the project.

“It is extremely difficult to mitigate the loss of an entire cultural landscape,” she said.

Douglas assured the environmental and tribal groups that they would be able to submit additional information and respond to any materials from BrightSource.

At the other end of the spectrum, solar industry representatives spoke about the chilling effect a Palen denial could have on further development of solar tower projects in the California desert and across the U.S.

“The solar resource is the largest resource in the world; it’s intermittent,” said Frank Wilkins, director of the Concentrating Solar Power Alliance, an industry group representing solar thermal project developers. “CSP technologies have the ability to do away with that problem; you can store away energy and use it when needed.

“It’s important that these projects be built so the industry can learn to reduce the cost. If these projects aren’t being built, it’s likely the technology will leave the country and go overseas,” he said.

BrightSource bought Palen in 2012 from then-bankrupt Solar Trust of America, which had won state approval for the project as a solar thermal plant using parabolic troughs, large curved mirrors around 20 feet tall. The technology change to solar towers has meant BrightSource has to re-permit the project with the Energy Commission and the U.S. Bureau of Land Management.