The FAST demonstration project will significantly contribute to achieving the Department of Energy’s (DOE) SunShot Initiative goal to have installed solar field costs of $75 per square meter by 2020.

BrightSource Energy, Inc., a leading concentrating solar thermal technology company, announced today that it will develop and demonstrate an advanced technology and process for the assembly and installation of heliostats – called the Flexible Assembly Solar Technology (FAST) – to substantially reduce the costs and construction time of the solar field in solar power tower projects.

The FAST demonstration project will significantly contribute to achieving the Department of Energy’s (DOE) SunShot Initiative goal to have installed solar field costs of $75 per square meter by 2020. The SunShot Initiative has a broader target goal for concentrating solar power of 6¢ per kilowatt hour by 2020.

The new heliostat assembly process represents a breakthrough in the way that the solar field is developed and constructed. FAST is designed to:

“The SunShot Initiative award will help drive important technology innovation in our heliostat assembly processes, resulting in significant cost-reductions and efficiency-gains,” said Israel Kroizer, Executive Vice President of Engineering, R&D and Product Supply. “The solar field is the single largest capital expense of a typical solar thermal power tower plant. By improving the design and construction of the solar field, we can dramatically push solar thermal power tower plants down the cost curve.” 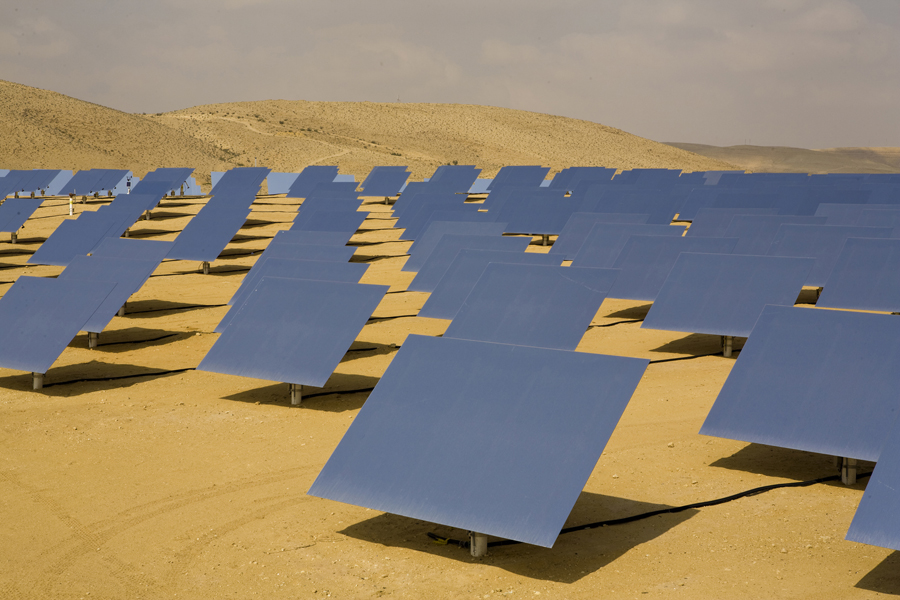 Currently, the hundreds of thousands of heliostats (mirrors) needed for a BrightSource solar thermal power tower plant are fully assembled at a large on-site manufacturing facility known as the Heliostat Assembly Building (HAB). The expansive, 48,000 square foot facility is equipped with a complex conveyor system and automated machinery. At peak, the facility assembles more than 500 heliostats per day. The prepared heliostats are then stored on-site to be transported into the solar field and installed by crane onto steel pylons.

To drive down the installed costs of the heliostat field, the FAST system will consolidate and streamline the heliostat and solar field installation processes by combining both functions on a mobile platform operating in the solar field. The FAST process will allow multiple units to be deployed simultaneously, resulting in major performance improvements.

As part of the project, BrightSource will engage a U.S.-based automation company to support the fabrication and development of the FAST prototype. This multi-million dollar contract will drive domestic investment and jobs and also contribute to US expertise in an important segment of the global solar market.

The FAST research project was one of 21 concentrating solar power proposals selected by DOE from among dozens that were submitted for review. The DOE selection process involved an external peer review panel that provided independent technical evaluation of the submissions. Following selection of the FAST research project, the DOE and BrightSource entered into a funding agreement pursuant to which the DOE will provide up to $4.8 million in support of the project. BrightSource will match 100 percent of the DOE’s contributions.

The mission of the SunShot Initiative is to accelerate the research, development, and large-scale deployment of solar technologies in the United States and to ensure that solar power is a viable and economic source for the nation’s power needs. Beyond the technical goal of reducing total cost by 75%, the objectives of the SunShot Initiative are to boost the U.S. economic competitiveness and manufacturing of solar technologies within the U.S.

BrightSource’s system uses a state-of-the-art field of software-controlled mirrors, called heliostats, to reflect the sun’s energy to a boiler atop a tower to produce the high temperature and high-pressure steam. The steam can then be integrated with conventional power plant components to produce predictable, reliable and cost-competitive clean energy.

When equipped with thermal energy storage, our plants can effectively extend electricity production into later parts of the day and after sundown, when it is valued most by utilities and other power producers. Storage reduces costs by increasing a plant’s capacity factor – the amount of energy produced in a given day – to offer higher asset utilization. Dispatchability provides utilities with greater operational flexibility to shape production and account for the variable nature of other intermittent resources. Additionally, it offers utilities and grid operators verifiable value in the form of balancing and shaping capabilities and ancillary services.
BrightSource Energy’s 370 MW (net) Ivanpah Solar power plant is more than halfway complete and will begin delivering power to the grid in 2013.