Morocco gets plenty of sun—about 3,000 hours per year, according to the Solar GCC Alliance. A new solar plant in that desert country is poised to take advantage of the ample Saharan sunlight.

The images above show the first phase of the solar complex, Noor 1, located at the “door of the desert” in the south-central Moroccan town of Ouarzazate. The top image, acquired with the Operational Land Imager (OLI) on Landsat 8 in December 2013, shows the plant soon after the start of construction. OLI acquired the second image in December 2015 as the plant neared its inauguration. Turn on the image comparison tool to see 500,000 solar mirrors spread across the desert. 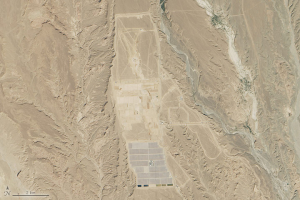 Noor 1 has a power-generating capacity of 160 megawatts. When construction on subsequent phases is completed sometime around 2020, the complex will be capable of producing 580 megawatts. It will become the largest concentrated solar power plant in the world. Almost half of Morocco’s energy is expected to come from renewables, about one-third of which will be from solar.

Concentrated solar power plants use the Sun’s energy to heat water and produce steam that spins energy-generating turbines. The system at Ouarzazate uses 12-meter-tall parabolic mirrors to focus energy onto a fluid-filled pipeline. The pipeline’s hot fluid—393 degrees Celsius (739 degrees Fahrenheit)—is the heat source used to warm the water and make steam. The plant doesn’t stop delivering energy at nighttime or when clouds obscure the sun; heat from the fluid can be stored in a tank of molten salts.

Ouarzazate’s Noor 1 was scheduled to go online in late December 2015. According to news reports, the plant’s launch was postponed to an unspecified date.